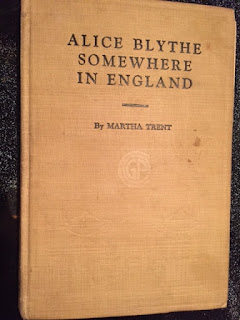 A little while ago a I wrote about a "boy's book", The Space Pioneers,  part of a series of books written under a house pseudonym, for which the actual writer is difficult to determine. How about a "girl's book", part of a series written under a house pseudonym (probably), the actual writer of which is perhaps impossible to determine?

Well, why not? Alice Blythe Somewhere in England is one of a set of 6 books published in 1918/1919 by the Goldsmith Publishing Company of Cleveland, OH; and also by Barse & Hopkins of New York. The copyright is held by Barse & Hopkins, so I don't know how Goldmith got involved, though my copy has their logo. Goldsmith do appear to have been occupied publishing a number of series of books for girls.

It is not at all clear who "Martha Trent" actually was. Most likely the books were written by an employee (or a few) of Barse & Hopkins, probably from a centrally produced series outline (though inconsistencies between volumes did crop up). The books have gotten a certain mild amount of attention in latter years, generally from historians looking at World War I stories and propaganda.

So what about the book itself? Alice Blythe is a teenaged girl (perhaps 16) living with her "aunts" (actually I think more distant relatives) in rural England in about 1917. Her parents are busy in London as a doctor and nurse. Her brother is at the front. Her "cousin" Peter has joined the Royal Flying Corps, and is just itching to go to France, but has only just reached the age where he can go.

Alice is described in very tomboyish -- indeed almost androgynous -- terms, and that seems to have been a general theme throughout this series. And she has boyish (for that time) talents and interests: she is a good driver, Peter has taught her to fly a plane, and she is a terrible knitter. When Peter at last departs for France, Alice determines that she must contribute to the war effort as well, and after a small contribution on the home front (denouncing a pacifist), she heads to London to convince her parents to let her go to Belgium.

Once there she starts to serve in a hospital, though not as a nurse (remember, no "feminine" skills) -- rather as a sort of janitor. There she meets the American girl Helen Carey. But her instinct for adventure, and her driving skills, get her involved with a crashed aeroplane, its pilot, a secret message, and eventually a German spy. Of course she saves the day, more or less, and by the by meets Marieken de Bruin, her brother, and Peter. And gets sent back to England as a reward.

I think my tone sounds a bit more snarky than the book really deserves. Don't get me wrong, it's no great shakes, and terribly implausible. But it's a swift read, and on its terms enjoyable enough. I suspect it served its market well enough, back in the day. I mentioned the Tom Corbett books above -- I have to say that, taken in context, this book is better done, less offensive to the intellect, than the Tom Corbett book I read. Which is faint praise to be sure, but there you are.

(I should briefly note as well that it is illustrated, by Chas. L. Wrenn, and pleasantly enough.)
Posted by Rich Horton at 6:55 PM