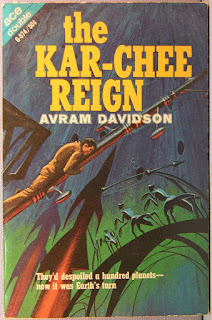 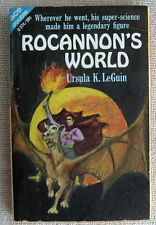 Ace Doubles have a fairly declassé image. One doesn't tend to look for all time classics or Hugo candidates among them. Though as previous reviews in this series have shown, there were first rate novels and novellas published as Ace Double halves, such as Jack Vance's Hugo winner "The Dragon Masters". (That was, however, a reprint.) But even so, seeing that Ursula K. Le Guin's first novel was an Ace Double came as a mild surprise to me, some time back when I encountered this pairing. Since then I've realized that that wasn't really that rare, for example, Samuel R. Delany also had early novels published as Ace Doubles, as did many other great writers.

Rocannon's World is about 44,000 words long. It was expanded from a 7700 word story, "Dowry of the Angyar", which was in the September 1964 Amazing. This story appears unchanged as the prologue to Rocannon's World (called here "The Necklace"), and it has latterly been reprinted by itself under Le Guin's preferred title, "Semley's Necklace".

If Ursula Le Guin is a mild surprise as an Ace Double author (her second novel, Planet of Exile, was also an Ace Double half), so too might be Avram Davidson. Though it should be noted that Davidson's early novels were fairly routine, rather pulpish, not terribly characteristic of his best work. The Kar-Chee Reign is a 49,000 word novel, a prequel to his 1965 Ace novel (not an Ace Double half!) Rogue Dragon. Rogue Dragon itself was nominated for a Nebula Award, but The Kar-Chee Reign, a lesser work, to my mind, was not. The two novels were reprinted together in 1979, in a volume bannered "Ace Double", but not a true Ace Double. That is, it was not published in dos-a-dos format, and not part of a regular series. Rather, Ace essentially put out a few single author "omnibus" editions of two novels at about that time, and called them Ace Doubles in a nod to their past. (I have another such book pairing A. Bertram Chandler's Into the Alternate Universe and Contraband From Otherspace.)

In retrospect, Rocannon's World is a curious novel. It is a "Hainish" novel, thus fitting into Le Guin's main "future history", but it doesn't seem wholly consistent with novels like The Left Hand of Darkness and The Dispossessed. What it mainly is is a fantasy novel with SF trappings. Except for the prose, which is excellent as one might expect from Le Guin, it feels strikingly pulpish. The plot and feel would not have been out of place in an early 50s issue of Planet Stories. Perhaps the influence of Leigh Brackett or Andre Norton can be detected. The ultimate effect is mixed -- the plot is just not terribly plausible in places, and some of the setting and trappings are a bit old hat. But as I said the prose is fine, and the romantic and melancholy overtones are extremely effective.

Fomalhaut II is a planet which has only been lightly explored by the League of All Words (in later novels, the Ekumen). The League does not even know how many intelligent races live there -- three for sure, but perhaps two more. One non-humanoid race is not even encountered in the book. The main races are the Liuar (basically "humans"); and the now split Gdemiar (Clayfolk -- dwarf-analogues) and Fiia (elf-analogues). The League has been promoting the advancement of the Gdemiar to an industrial society, and extracting taxes from them and the Liuar, but after the ethnologist Rocannon encounters Semley (an aristocrat of the Liuar) in the prologue, he decides the world is not well enough understood, and he mounts an expedition to study it. But disaster strikes -- an enemy race is there as well, and they find and destroy Rocannon's spaceship, marooning him with none of his equipment.

He then must travel, with the help of Semley's grandson and a small band of locals, to the mysterious Southwest continent where the enemy is located, hoping to find an ansible and call for help. Their journey, mostly on rather unlikely flying "horses", or windsteeds, is full of adventure -- they encounter various different sorts of outlaws, and danger from the weather, and a scary quasi-intelligent race, and finally an unconvincing "Old One" who grants Rocannon special powers, helping him finally accomplish his mission. All this is entertaining but as I have said faintly pulpish and not very plausible. But the final resolution is achingly bittersweet, deeply romantic and very melancholy. Certainly a novel worth reading, though of course Le Guin has done much better things.

I haven't read The Kar-Chee Reign in some little time, so the following summary may be a bit lacking. It is set far in the future. Humans have colonized other stars, and have forgotten Earth. Earth itself is, as Davidson puts it "flat, empty, weary and bare". A few humans remain, apparently living a low-tech style of life. Then the insectlike aliens the Kar-Chee come, to mine the Earth for its remaining metals, with the help of huge beasts called Dragons by the humans. The Kar-Chee hardly care about humans, displacing them without much thought or worry. Humans have come to cower away from the Kar-Chee, avoiding them in hopes of escaping notice.

The Rowan family lives in fair comfort on an isolated island that the Kar-Chee have not yet reached. When the aliens finally do come, certain of the locals seem to have forgotten the policy of avoiding them at all costs, and a series of attacks are mounted. These attacks meet with initial success, but then the Kar-Chee are irritated, and reprisals occur. But a group led by one Liam decides to continue to take the fight to the Kar-Chee. It will not be a great surprise that they are eventually successful, and Liam becomes a celebrated hero. The Kar-Chee depart, but they leave some of the Dragons behind (setting up Rogue Dragon, set some time further in the future). There is also an indication that contact with the human-colonized worlds will resume, and that Earth itself will be revitalized.

It's far from a great novel, and it's far from Davidson at anything like his best. Still, I do recall enjoying it, though I thought the action in general routine (and sometimes confused), and much of the setup a bit silly. The prose shows only hints of pure Davidson.
Posted by Rich Horton at 2:13 PM