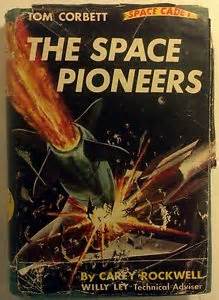 Tom Corbett, Space Cadet, was one of the first Science Fiction TV shows, running from 1950 to 1955 variously on all four of the TV networks then operating in the US. (NBC, CBS, ABC, and Dumont.) It has often been assumed to be based, if loosely, on Robert Heinlein's juvenile novel Space Cadet, but it appears that the series was instead based on a comic strip developed by Joseph Lawrence Greene but never published. Heinlein was paid in order to forestall any questions about copying his work, it appears.

There were a total of 8 novels published by Grosset and Dunlap (and a couple of picture books as well). The plots were apparently taken from either the TV series, the short lived radio show (from 1952), or the comic strip. The books were bylined "Carey Rockwell", certainly a pseudonym. The actual author has not been identified. It seems likely that Joseph Lawrence Greene (NOT to be confused with the later SF writer Joseph Green) had a hand in at least developing the plots -- I suspect another writer or writers did the actual novelizations. Richard Jessup, who apparently wrote for the TV show, has been suggested as one candidate. (The copyright in my edition is attributed to Rockhill Radio.)

It has occurred to me that I should perhaps be a little circumspect in reviewing juvenile novels of a certain age -- possibly the flaws I see as a 56 year old man in 2015 are the sort of things an eager 10 year old reader in 1953 (or in 2015 for that matter) might simply not notice. So I apologize for what I am going to say about this book -- but I do have to add, I have read other juvenile SF novels from the same era, not all of them by Robert Heinlein, and they were a lot better. And the problems with this book are not just with the science, but with the plot as well. (The characters, dialogue, and prose are none of them anything worthy praising, but probably do fall within the normal (low end of normal) for books for young readers.)

So, anyway -- this novel is in contention for the worst book I have ever read. It's worse than Roy Rockwood's Through Space to Mars (though it's a close thing, and this book is less racially offensive). It's just appalling.

Willy Ley, by the way, is listed as Science Consultant. I can only assume he was not actually "consulted", or if he was, he was ignored. (Which, as I have heard from other "Science Consultants" for media projects, such as John Scalzi, is not at all rare, to this day.)

The Space Pioneers is the fourth Tom Corbett Space Cadet Adventure. My edition is a possible first (there is no way to tell). It's illustrated by Louis Glanzman (decently enough). As the novel opens, Tom and his friends Roger Manning (radioman extraordinaire) and Astro (rather slow but big Venusian with a talent for atomic engines) are still just Space Cadets, not full members of the Solar Guard, despite apparent previous successes. So naturally, when a project is started to colonize a planet of Wolf 359 (named Roald), the three of them are assigned to vet the prospective colonists. Seriously? You want to choose 1000 colonists for a brand new colony and you choose them based on the decisions of three adolescents? (Well, I suppose maybe they are around 20.) In the process they reject a few candidates, and they are surprised when the prospective Governor, Christopher Hardy, overrules them in a few cases, particularly the slimy Paul Vidac, whom Hardy chooses as Lieutenant Governor.

The Cadets are chosen to lead the way to Wolf 359 in their ship, the Polaris. The convoy includes 1000 ships, which seems odd as there are only 1000 male colonists plus their families. On the way there are more strange happenings, particularly the failure of their messages to their mentor, Captain Steve Strong, to ever reach him. Hardy and Vidac become ever more tyrannical, taking actions such as charging the colonists for their food on the trip, against a share of their homesteads.

Once they reach Wolf 359, or that is the planet Roald, there is a disaster: some strange effect plays hob with the electronics on the ships. Only Tom's heroics, after Vidac, the dastardly coward, loses his cool, save the Polaris. 400 of the 1000 ships crash (though apparently with no loss of life). Naturally only a heretofore undiscovered seam of pure uranium could have caused this! The colony is quickly established -- for example, the "atmosphere plants" go up in three days. (Everyone can breathe OK before this, mind you.) But Vidac and Hardy continue their evil ways, charging the colonists even more. The irascible but brilliant Professor Sykes is assigned to find the uranium, while Vidac, realizing that the three Space Cadets are onto him, plots to frame them for Sykes' murder.

And so on. The plot is just absurdly silly throughout, and then the ending is botched, occurring largely offstage: after all the work to set up the villains, the climactic foiling of them, and their arrest, is all but elided. The attitudes towards women are purely as chauvinistic as you would expect for a grossly cliche version of the 1950s (though there is a brief mention of a beautiful astrophysicist, Dr. Joan Dale, who was a apparently a significant character in the TV show). Different races are simply ignored (to be fair, one might suppose, if one wanted, that the mostly undescribed minor characters represent the full panoply of humanity, but that is certainly not shown).

And the science. Oh my gosh. The uranium stuff. The space travel -- apparently it takes about 4 days (at speed) to go 8 light years, with no mention of hyperspace. (It took a lot longer for the whole colony convoy to get there, to be sure.) The asteroid dodging. The math -- apparently Wolf 359 is 50 billion miles away, which is only off by three orders of magnitude. (It's actually some 46 trillion miles away -- a bit less than 8 light years. 50 billion miles won't even get you to the Oort Cloud.) And lots more. This is really dreadful stuff, and executed with obvious contempt for the readership. It's possible, I am sure, that the TV shows were able to kind of slough over some of this stuff, to make it less obviously dumb. And it's likely that had I encountered these books age 10 or so I'd have missed much of the silliness, though I'm damn sure I'd have recognized that these weren't anywhere near as good as, say, Andre Norton, or Alan E. Nourse, or for gosh sakes Danny Dunn!
Posted by Rich Horton at 8:53 PM