Ace Doubles: The Plot Against Earth, by "Calvin M.Knox" (Robert Silverberg)/Recruit for Andromeda, by Milton Lesser 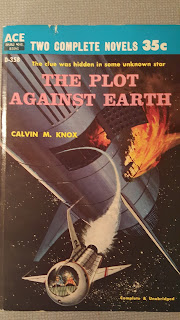 Ace Doubles again. This one features two writers working under pseudonyms, though in rather different ways. Robert Silverberg, in his most prolific period, often used a variety of pseudonyms and house names, the most common being his "Protestant" pseudonym, "Calvin M. Knox". Milton Lesser, on the other hand, was the writer's birth name. He began publishing SF in 1950, at the age of 22. He changed his name legally to Stephen Marlowe in 1956, a name he had first used as a pseudonym in 1951. Eventually he turned primarily to mysteries, mostly published under the Marlowe name. He continued to publish a great deal of SF until 1960, mostly under the names "C. H. Thames", "Darius John Granger", and "Adam Chase", in addition to Milton Lesser. His total output in the 1950s in SF was over a hundred short stories and about a half-dozen novels. After 1960 he wrote mostly crime fiction. He was never all that highly regarded in SF, but his mysteries gained some notice, as did some fictionalized biographies of Christopher Columbus and others. He died in 2008.

Recruit for Andromeda is rather a mess of a novel, haring off in a few different directions to no particular ultimate result. It opens presenting an idea reminiscent of that in Silverberg's The Seed of Earth, reviewed here recently: a lottery to select people for mandatory space travel. We meet Kit Temple and his girlfriend Stephanie -- it's Kit's last year of eligibility. Noone has ever returned from the "trip to Nowhere" (including Kit's brother): but Kit is chosen as well. We also meet Alaric Arkalion, Jr., a rich man who hires a mysterious Mr. Smith to impersonate his son Alaric III and take his place on the trip. And we meet a Russian woman, Sophia Petrovich, who volunteers for the lottery, even though women are not subject to it, in order to escape her drab life.

Kit soon leaves (after one night of passion with Stephanie), and during his training he makes friends with the fake Alaric Arkalion III, even while realizing there is something odd about him. Sophia, meanwhile, is taken to Jupiter, for special Soviet training that will make her a superwoman (due to Jupiter's gravity). All then head to Mars, and then the mysterious trip to "Nowhere", via some sort of matter transmitter. On this planet they find a somewhat flourishing planet, full of aliens of all sorts of species, and they learn that the whole shebang his hosted by an ancient race, nearly extinct, that wishes to choose the most worthy possible race to succeed them. Kit meets his brother again, who has become the leader of the Earth city on Nowhere. And soon they learn that the aliens wish to choose an Earth representative from among the two human factions: American and Soviet, and that they must be recent arrivals, so Kit and Sophia are assigned to battle it out for human supremacy. Meanwhile, back home, Stephanie is campaigning for women to be allowed to follow their loved ones on the "trip to Nowhere" ... but will Kit still be waiting for her, especially after he gets to know the beautiful and capable Sophia? ... and there is another twist or two waiting. In some 35,000 words.

It reads like three or four short story ideas mashed together, and not all that successfully. The prose is competent, and one or two of the numerous SF ideas introduced are kind of cool (the rest are just silly) ... but on the whole, this is a pretty bad book.

Stephen Marlowe was prolific, but Robert Silverberg was far more prolific in the mid to late '50s. He also left the field, more or less, in the early '60s, turning mostly to nonfiction, but returned towards the middle of the decade with some much more impressive work, a remarkable series of novels and shorter works that garnered numerous award nominations and awards, and eventually led to his highly deserved designation as a Grand Master of SF. As good as his best work is, his early work was much less so -- yardgoods, one might say, though almost always quite competent and entertaining yardgoods. In this company, The Plot Against Earth is typical, and indeed not really early Silverberg at early Silverberg's best.

The hero is Lloyd Catton, an Earthman who has been sent to Morilar, home of the Interworld Commission on Crime, ostensibly to join a pan-Species investigation of the illicit traffic in hypnojewels. Catton's real mission is to ferret out the presumed plot by the three leading humanoid species, the Morilaru, Skorg, and Arennadilak, against the upstart Terrans. Catton, using time-honored human private eye methods, quickly tracks down a major center of hypnojewel smuggling. He also encounters the daughter of the Terran Ambassador, who confesses she wants to run away with her lover, a Morilaru man, and can Catton check this Morilaru out? Of course he turns out to be one of the hypnojewel smugglers, but the girl has eloped before he can warn her.

Catton arranges to follow leads gleaned from the smugglers to Skorg, where at least some hypnojewel activity originates. But his ship is sabotaged, and he and a small group of various aliens are marooned and must trek to the nearest rescue beacon. But his surprise reappearance destabilizes things, and he is able to follow further leads to a planet of chlorine breathers, and by the by rescue the ambassador's daughter ... More private eye methods (i.e. beating up people and making lucky guesses) lead Catton to the real villain of the piece ... not much of a surprise.

Silverberg being Silverberg -- never less than a pro -- this crackles along well enough. But it's not much of a novel, really, either as SF or as a crime novel. It is, indeed, yardgoods, and must stand as one of the least of Silverberg's many novels.