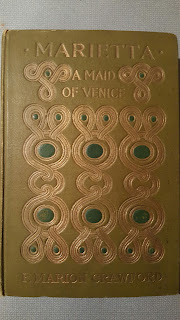 Another really nice discovery in the ranks of hoary old bestsellers. Francis Marion Crawford was an American novelist, born in 1854 to Thomas Crawford and Louisa Cutler Ward. His father was a sculptor, and his mother's sister was Julia Ward Howe, author of "The Battle Hymn of the Republic". His sister Mary was also a novelist, writing as Mrs. Hugh Fraser. Both Mary and Francis were born in Italy and spent much of their lives abroad (Mary's husband was a British diplomat). Francis, after spending time in India and Germany, settled permanently in Italy in 1883. By this time he was a successful novelist (his first novel, Mr. Isaacs, set in India, was a big seller in 1882). Crawford continued to publish an extraordinary number of novels for the rest of his relatively short life (he died in 1909). His novels were set in many places, but in the final analysis he is best known for his books set in Italy, especially the Saricenesca series. (One of these novels, interestingly, was called Corleone: A Tale of Sicily, and has been called the first major treatment of the Mafia in literature.) Crawford also published a number of well-received shorter supernatural stories, of which by far the most famous is "The Upper Berth" (1885), considered one of the great ghost stories of all time. (I read it when it was reprinted in Weird Tales in 2004.)

Marietta is one of his Italian historical novels, though not part of his major series, and apparently not one of the best remembered. It was published in 1901, and my copy seems to be part of the fifth printing (February 1902), by which time 38,000 copies had been printed. The publisher is Macmillan.

For all that it doesn't seem to stand in the first rank of his works, I really enjoyed this novel. It is unabashedly a romance, in the old sense (and new). The characters are engaging and interesting but not quite fully realized. The plot is a bit implausible, at times faintly (though not dreadfully) melodramatic. But it moves rapidly, is quite nicely written (in rather an old-fashioned style), and there are a couple of moments of real power and beauty.

It is based, a bit loosely, on a true story: the establishment of the Ballarin family of glassmakers in Murano, Italy, in the 15th Century. Zorzi (or "George") Ballarin was an apprentice of the great glassmaker Angelo Beroviero, and it is widely believed that he stole his master's secrets (originated by Paolo Godi) and set up shop on his own, while also marrying Beroviero's daughter Marietta. A descendant of Zorzi Ballarin, Giuliano Ballarin, is even now a renowned Murano glassmaker. The novel tells the story of Zorzi and Marietta, focusing on their love story, and suggesting that Zorzi did nothing so crass as stealing his master's secrets.

Murano is an island very close to Venice (nowadays technically part of Venice), where the already famous glass shops were moved because of the risk of fire. As it happens, I had heard of Murano (and not just because I used to own a Nissan Murano): there is a brief episode in Dorothy Dunnett's Niccolo series involving Murano and its glassworks, set a few years before the action of this novel. So much we learn from historical novels!

The novel is set in late 1470. Zorzi is a young Dalmatian, an apprentice to Angelo Beroviero. As a Dalmatian, he is forbidden to actually make glass, but he has worked with Angelo for years, first as just a laborer, but Angelo trusts him, and he has learned the trade, indeed in some ways surpassing his master. Angelo appreciates him because he is a true artist, unlike Angelo's sons, who are only interested in the money they can make. Angelo has a beautiful daughter, Marietta, whom he has indulged to the extent that she too understands the artistry of glass. She and Zorzi have fallen in love, though neither believes the other shares their feelings. And Angelo has plans for Marietta: he wants to marry her to Jacopo Contarini, the son of one of Venice's ruling Council of Ten. He enlists Zorzi to take a message to Jacopo, arranging an encounter between he and Marietta, so both can assess the other.

In the process Zorzi stumbles on a secret meeting hosted by Jacopo, plotting, rather sillily, revolution. Zorzi is forced to pledge his loyalty to Jacopo and his fellow conspirators (otherwise, they will kill him). This pledge, to Zorzi's mind, means forsaking all hope of any future with Marietta, as she is, in his mind, pledged to Jacopo. But Jacopo is a weak and venal man, who has purchased a slave woman from Georgia, Alisa. Alisa and her true lover, the Greek sailor Aristarchi, plot to steal any money Jacopo makes, which will mostly be Marietta's dowry.

This sets in motion the plot, which is propelled by Angelo's son Giovanni discovering that Zorzi is actually a skilled glassmaker, which is against the laws of Venice (as he is a foreigner). Giovanni insists that Zorzi be arrested, while trying to steal his father's secrets once Zorzi is out of the way. Thus Zorzi faces exile, but Marietta works to save him, at risk of ruining her own reputation. Happily (and implausibly) ... well, no fair revealing the resolution, though it's hardly a surprise.

The conclusion is perhaps a bit overhasty, and has aspects of deus ex machina. And there is no denying that the novel is "of its time" in its view of the nature and natural relationships of men and women (even as Marietta is portrayed as something of a feminist, in 15th Century terms anyway). But the book is just lots of fun. It's easy to root for Marietta and Zorzi, and to like gruff Angelo and the servants Nella and Pasquale, and to hate Jacopo and Giovanni, and to queasily admire Alisa and Aristarchi. And, as I said, there are passages of real power, particularly one towards the middle when we see Zorzi creating true beauty in glass. (Some of the depiction of the process of glassmaking is quite well done as well.)