a brief review by Rich Horton

This is, I think, one of the happier and more unexpected discoveries I've made prowling book sales and antique stores for forgotten old books. I found this volume at the annual charity book sale at West County Mall in St. Louis County, the Greater St. Louis Book Fair. I had never heard of the author, but the book looked potentially interesting. 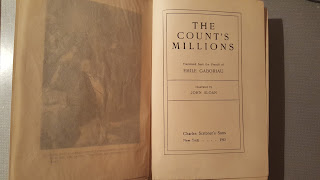 My edition is from Scribner's, published in 1913. Good condition, no DJ. Illustrated by John Sloan. Inscribed on the flyleaf "Dan R. Bissell, Jr., Xmas 1913".

I looked into Émile Gaboriau and found that he was actually a rather well known French writer in the middle of the 19th Century. He was born in 1832, died in 1873. He started publishing novels no later than 1861, and made a splash in 1866 with L'Affaire Lerouge, his first novel to feature Monsieur Lecoq, a detective. Gaboriau wrote several more novels about Lecoq, who was a very popular character, perhaps the most popular detective character prior to Sherlock Holmes. He died (of apoplexy, oddly enough the same way a major character in the novel at hand dies) aged only 40, but according to Wikipedia his novels kept appearing until at least 1881, leading me to suspect that perhaps the Lecoq series was continued by another writer. The Count's Millions appeared in 1870. (It is not a detective novel.)

The story opens with the rather unpleasant servants of the Count de Chalusse awaiting their master's return, one night in the 1860s. (Dates are given as 186-.) But a cabdriver comes to the house, announcing that his passenger has had a fit ... he is brought into the house, still alive, but in much distress. A doctor is summoned who can do little, and the vigil begins, attended by his ward, the beautiful 18 year old Marguerite, and by the grasping set of servants.

We quickly learn that Marguerite is a mysterious girl -- she only showed up a couple of years previously, and most assume she is the Count's illegitimate daughter but there is no proof. And a whole raft of people are soon snooping around, most interested in somehow getting their hands on the Count's "millions". There is the Marquis de Valorsay, a scoundrel who has squandered his money and needs to marry a rich heiress. There is Isidore Fortunat, a rascally businessman who has been helping Valorsay keep up the pretense of solvency while he tries to persuade Chalusse to let him marry Marguerite. There is the General de Fondege, who wants Marguerite for his son. The servants want their share of the estate. Much depends on whether or not the Count survives -- for there is no will, and if Marguerite is not shown to actually be his daughter, she will get nothing -- a blow to Valorsay, and indeed to Fortunat, who hatches a back up scheme: perhaps he can find Chalusse's long-estranged sister and represent her in an attempt to receive what would be her rightful inheritance.

Finally we are introduced to an industrious young lawyer, Pascal Ferailleur. Unlike everyone else we've met (save Marguerite), he seems a genuinely good person: a hard worker, raised by a mother who was cheated of her husband's money after his untimely death, Pascal has become a fairly successful lawyer. But he makes a terrible mistake: he accompanies a friend to a gambling house run by the beautiful middle-aged Lia d'Argelès, where he has a run of luck. But suddenly he is accused of cheating ... and there seems to be proof. Of course, as we have already gathered, Pascal's "friend" was actually a scoundrel hired by Valorsay to ruin him by planting evidence of cheating. And why? That's easy to guess -- Pascal has fallen in love with a young woman, none other than Marguerite, and the Marquis must get him out of the way.

And so it continues, with continued recomplications. We learn of Marguerite's difficult life before the Count found her and took her in. We learn of the reason for the Count's break with his sister: she had a foolish love affair, eloped, and was abandoned. We meet a vile couple running a little grocery, who turn out to have had a previous connection with the Count. Pascal plans to go into hiding while trying to recover his good name. Marguerite rejects the advances of the likes of Valorsay, with only a kindly magistrate to help her. The Count's money has somehow disappeared. And more, and more.

Much of the story is told through the point of view of peripheral characters: the scheming Fortunat, his surprisingly honest assistant Victor Chupin, the Count's servants, especially the slimy housekeeper Madame Leon, the Marquis de Valorsay, and so on. Gaboriau's attitude is throughout quite cynical. He gives details of a variety of marginally legal money-making enterprises. It's not a comedy -- it's a romantic thriller of sorts -- but it is often kind of funny.

And then the end of the book approaches, and it becomes clear that there is no way to resolve all the tangled threads of the plot, and ... the last page announces: "The conclusion of this exciting narrative will be found in the volume called Baron Trigault's Vengeance."

Well, I shouldn't complain -- in the novel was in fact published in two volumes. The full title was La Vie Infernale, with the two parts called Pascal et Margeurite and Lia d'Argelès. I'm not sure why the English titles for the two volumes became The Count's Millions and Baron Trigault's Vengeance. (Though the first chapter is headed "Pascal and Margeurite" in my book -- I thought it just a chapter title but then no other chapters had titles.) I do want to know what happened -- who Marguerite really is, and more about the Count's sister, and how Pascal redeems himself (if indeed he does) ... So I've already ordered the sequel. That's not to overpraise the book -- it's very melodramatic, as should be obvious, and coincidence rules. And the characters are only two-dimensional, but as I said still quite amusing. It's popular fiction of its time -- but pretty good popular fiction of its time.
Posted by Rich Horton at 6:46 PM