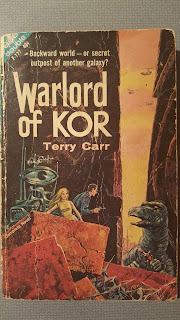 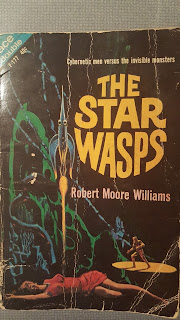 Okay, here's another Ace Double. This one qualifies as pretty forgotten, and mostly for good reasons. (Though the covers are, as far as I can tell, by Jack Gaughan, a pretty significant artist.) But it does feature a major major SF figure, Terry Carr. Carr is not widely known as a writer, but he was a hugely significant editor of Science Fiction. He was born in Oregon in 1937, and died terribly young in 1987. He was first a major fanwriter and editor, winning a Hugo for Best Fanzine in 1959 (for Fanac, coedited with Ron Ellik), and another for Best Fanwriter in 1973. He became an editor for Ace Books in the early 1960s, where he was especially known for coediting the World's Best Science Fiction series with Don Wollheim (the most important Best of the Year anthology of its time, the few years following the decline and eventual demise of Judith Merril's iconic series), and for creating the first series of Ace Specials, paperback original novels that included great work such as Le Guin's The Left Hand of Darkness. He left Ace in about 1971 to go freelance. He continued editing a Best of the Year anthology, for Ballantine/Del Rey, which was, in my perception, the leading such book when I was first buying SF books. He also edited one of the all time great original anthology series, Universe, which ran from 1971 to his death in 1987. In the 1980s he revived the Ace Specials, and published first novels by William Gibson, Kim Stanley Robinson, Michael Swanwick, and Howard Waldrop among others. He won Best Editor Hugos in 1985 and 1987.

Oh, and while he didn't write a whole lot of fiction, some of it was very good, including an admired novel (Cirque (1977)), and such stories as "Hop-friend" (1962), "The Dance of the Changer and the Three" (1968) and "They Live on Levels" (1973). But what of his first two novels? He seems to have mostly repudiated those, both of which were Ace Doubles. One was a collaboration with Ted White, under the name Norman Edwards: Invasion from 2500 (1964). And the other was the book at hand, Warlord of Kor.

In all honesty, Warlord of Kor isn't all that bad, though it's not all that great either. It's pretty short (about 34,000 words), and it's pretty rushed in places. The writing is competent but nowhere special. But the central idea is pretty effective, and the characters are tolerably well done. The working out is only OK. As a first novel, it strikes me as nothing to be ashamed of.

The protagonist is Lee Rynarson, something of an archaeologist who is studying the only intelligent race humans have ever found in their expansion through the Galaxy (or perhaps multiple galaxies). These are the Hirlagi, sort of a horse/dinosaur mix on Hirlaj. There are only 26 Hirlaji surviving -- they seem a tired an decadent race. They have a long racial memory, and Rynarson, in talking with one of them, hears stories of a warlord in the distant past, who united much of the planet, only to decide, after "communing" with the mysterious god Kor, that the Hirlaji must abandon not just war but science.

The situation on Hirlaj is complicated by a local strongman who wants to be named governor of this planet of the "Edge" of human exploration. In addition, there are the relics of the "Outsiders", an ancient race of aliens who have disappeared. Rynarson realizes after some time that the old Hirlaji temples he sees in their memories (once he gains telepathic contact with this mostly telepathic race) resemble Outsider ruins. The other major characters are Mara, the love interest, and an eccentric Earthman who preaches a religion he doesn't believe.

It's all resolved in an overly violent conclusion, revealing the true nature of the god Kor (easily guessed), and hints of the fate of the Outsiders, as well as a resolution to the putative governor's ambitions. As I said, the novel as a whole is nothing special, but it's not terrible either. Nothing I'd recommend making a special effort to find, but a reasonable first effort.

Robert Moore Williams was never for me really a name to conjure with, though I gather his Jongor series of Tarzan derivatives got some notice, and he did receive some praise as well for his early fiction, particularly "Robots Return", from Astounding in 1938, which was included in the all but definitive early SF anthology Adventures in Time and Space. He was born in Farmington, MO (not too terribly far from where I live) in 1907, and died in 1977. He began publishing in the pulps in 1937, and published stories and novels fairly regularly until the early '70s. I don't think he was ever regarded as much beyond a hack, though I'd say the two Ace Doubles I've read by him reveal a writer of some mild ambition and imagination, but not enough talent to make that work.

The Star Wasps (a title I suspect was conferred by Don Wollheim -- the words are never used in the novel) is about 45,000 words long. It's set in a corporately regimented Denver in 2470. The world's economy is controlled by Erasmus Glock, owner of Super Corporation. His childhood acquaintance, John Derek (later the husband of Bo! -- not!) is the leader of a resistance movement, urging people to strive for freedom. As the book opens, Derek turns a corporate flunky, in the process gaining the attention of Glock. He also meets and immediately falls in love with Jennie Fargo.

However, things are complicated by the presence of the "viral", alien electricity creatures who have been unwittingly attracted to Earth by the experiments of a physicist, Joseph Cotter. Glock has been using the viral as some sort of spies, but he loses control of them. The plot follows John Derek and his crew of freed criminals as they try to foment a revolution, but then realize that the viral might be the greater danger. Joseph Cotter and Jennie Fargo end up on the Moon, researching a solution to the viral problem, while John Derek confronts Erasmus Glock with his criminal shortcomings; and things come to a head as the evil blue viral begin killing people indiscriminately. Can Joseph Cotter disover a countermeasure? Can Erasmus Glock be brought to see the error of his ways? Will John Derek and Jennie Fargo get together?

It's a confused and silly mess of a novel. And it's a rampantly sexist novel as well, with a number of passages celebrating a woman's natural desire to be dominated (and cook for) a strong man. But Williams was really, at heart, an ambitious and idealist writer, and there are passages here that show him trying really hard to hit poetic heights, and to make serious philosophic points. Alas, he simply didn't have the talent to pull it off. A curious case.
Posted by Rich Horton at 9:02 PM