a brief review by Rich Horton 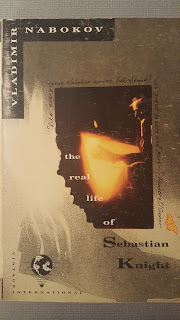 These are two novels, the first two in English* by the incomparably Vladimir Nabokov, that can hardly be called "forgotten" -- Nabokov's stature is such that none of his novels are remotely forgotten. However, these novels are less known than his later novels, and even less known than his major Russian novels such as The Gift, Glory, and The Defense. And they certainly weren't bestsellers -- it was not until Lolita that Nabokov had a commercial success.

(*Though there are some that suggest that Laughter in the Dark, Nabokov's 1938 translation of the 1932 Russian novel Camera Obscura, is sufficiently revised so as to count as a "new" novel in its English version. (Nabokov was motivated in part by his disdain for the first English translation.))

(And, yes, you can tell when I'm not quite ready to write about my latest "Old Bestseller"!) 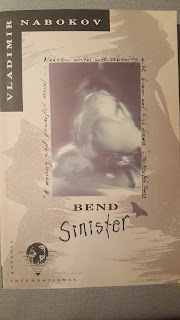 Nabokov, of course, was born in Russia, in 1899, to a wealthy family from the liberal side of the nobility. After the Revolution, the Nabokovs moved to Western Europe. Vladimir took a degree at Cambridge, but the family settled in Berlin, where his father was murdered in 1922, ironically by a Russian monarchist. Vladimir began writing fiction and poetry in the emigre community, under the name V. Sirin. He married Jewish woman, Vera Slonim, and after Hitler's rise they were eventually forced to leave Germany, first for France, then, in 1940, for the US. (Nabokov's brother Sergey, however, an outspoken opponent of Hitler, and a homosexual, died in a concentration camp.)

In the United States Nabokov taught at Wellesley and Cornell (among his students was Ruth Bader Ginsburg). After the financial success of Lolita, he moved to Switzerland, where he died in 1977. I have read all his English language novels and many of his Russian novels and stories (in translation, to be sure), and he has long been a favorite writer of mine. All his "big four" novels, Lolita, Pnin, Pale Fire, and Ada; are remarkable -- I confess a fondness among them for the shortest, Pnin, both the funniest and the saddest of his novels.

Vladimir Nabokov's first English language novel was The Real Life of Sebastian Knight (1941). He wrote it in Paris, and it is indeed set to some extent in that city. It concerns a Russian novelist who wrote in English. The novelist has just died (in 1936), and his brother is going through his papers and becomes obsessed with learning the truth about his life, and in particular his tortured final love affair. The story follows both "Knight's" life from his birth in Russia in 1899, his parents' divorce and his father's remarriage to his brother's mother, his father's death as a result of a duel defending Sebastian's mother's honor, his school years in Russia, then his University years at Cambridge, and the composition of his five books. He has two significant affairs -- a happy one with a nice English woman; followed by an apparently stormy one with a mysterious woman. The novel's structure is roughly chronological in this sense, and also in following the brother's investigations, as he tries to interview various people from Sebastian's past, and especially as he tracks down the mysterious lover.

In part Nabokov seems to be satirizing literary criticism and biography, especially through descriptions of an opportunistic book written by a former literary secretary of Knight's, but also through the brother's loving descriptions of each of Knight's rather odd novels. But he's also interested in the mysteries of identity presented by "Knight" (never given a real last name), by his brother (given only the initial "V"), and by the various different women who might be the mystery lover who ruined Knight's life. At the end, as the brother rushes to Knight's deathbed, he curiously seems to become Knight himself. A striking and beautifully written book, though not to me as engaging or satisfying as such later novels as Pnin and Pale Fire.

His first novel written in the US, and his second in English, was Bend Sinister (1947). Like one of his later Russian-language novels, Invitation to a Beheading, it is explicitly political, in a way generally foreign to Nabokov. (Indeed, to write a "political" novel was rather against Nabokov's usual artistic philosophy, and in his 1963 Introduction to this novel, he takes pains to point out that the focus of the novel is the main character's relationship with his son, not the repressive political conditions which drive the novel's plot.) Bend Sinister opens with the death of Olga Krug, beloved wife of philosopher Adam Krug. Krug is left with an 8-year old boy, David, in a country torn by a revolution led by an oafish schoolmate of Krug's, Paduk, called the Toad by his fellows at school. The new regime attempts to gain Krug's support, offering both the carrot of a University presidentship and the stick of veiled threats conveyed by the arrest, over time, of many of Krug's friends. The brutal climax comes when the new regime, almost by accident, realizes that the only lever that will work on Krug is threats to his son, then, due, apparently, to grotesque incompetence, manages to fumble away that lever.

The novel is (one is tempted to say "of course") beautifully written. Passage after passage is lushly quotable, featuring Nabokov's elegant long sentences, lovely imagery, and complexly constructed metaphors; as well as his love of puns, repeated symbols, and humour. The characters are well-portrayed also -- Krug, of course, and his friends such as Ember and Maximov, as well as villains such as the Widmerpoolish dictator Paduk and the sluttish maid Mariette. The novel, though ultimately quite tragic, is filled with comic scenes, such as the arrest of Ember, and comic set-pieces, such as the refugee hiding in a broken elevator. As Nabokov asserted, the relationship between Adam Krug and his son is the fulcrum on which the novel turns, and it is from that the novel gains its emotional power. But much of the novel is taken up with rather broad satire of totalitarian communism. The version portrayed here is of course an exaggeration of the true horror that so affected Nabokov's life, but it still has bite. The central philosophy of the new regime is not Marxism per se, but something called "Ekwilism", which resembles the philosophy satirized in Kurt Vonnegut's short story "Harrison Bergeron" -- it is the duty of every citizen to be equal to every other, and thus great achievement is unworthy. (It is not to be missed that Paduk was a failure and a pariah at school.) All this is bitterly funny, but almost unfortunate, in that it is so over the top in places that it can be rejected as unfair to the Soviet system which it seems clearly aimed at. That's really beside the point, however -- taken for itself, Bend Sinister is beautifully written, often very funny, and ultimately wrenching and tragic.
Posted by Rich Horton at 8:20 PM