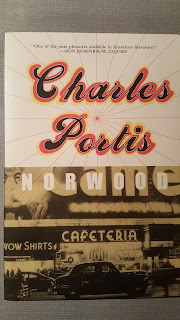 This blog is aimed first at books from, let's say, at least a half-century ago which were bestsellers, and also, sometimes, at books that have been "neglected" or "forgotten". I remember mentioning somewhere that one of the writers who is sometimes called "neglected" is Charles Portis, when he really isn't. In fact, for a writer with only five novels to his credit, the last of them published almost a quarter-century ago, Portis gets a pretty fair share of attention. To be sure, that's mostly because of one book -- True Grit -- and the two (both excellent) movies made from it. And the likes of Roy Blount, Jr. and Ron Rosenbaum did yeoman work, back in the day, to keep Portis in people's minds when few people remembered anything but the John Wayne movie. All that said, by now, all five of his novels are in print (from Overlook Press), and he is certainly on the general literary radar. (Which makes it a bit of a shame that he seems to be retired ... I don't know of anything new he's done this millennium, actually.)

Portis was born in 1933, and is still alive. He grew up in Arkansas, fought in the Korean War, and got his degree in Journalism from the University of Arkansas, then worked on papers in Arkansas and New York, before turning to fiction. Norwood was his first novel, published in 1966. It was followed by True Grit in 1968, which was made into the famous John Wayne movie in 1969. Norwood was filmed, much less successfully, in 1970, starring the other two featured actors from True Grit, Glen Campbell and Kim Darby. (Obviously, the wrong two actors to choose!) The movie also featured Joe Namath, of all people, and radically altered the novel's plot.

The novel opens with Norwood Pratt getting his discharge from the Army, around 1960, because his father has died and his sister can't be trusted on her own. Norwood comes home to Ralph, Texas (on the Arkansas border), obsessing a bit over the $70 his friend Joe William Reese still owes him. He goes to work at a gas station, and soon has to deal with an annoying and idle man that his sister marries. Norwood himself dreams of becoming a country music star. He runs into a man named Grady Fring, who has his hands in a number of different money-making pies. Fring hires him to drive a couple of cars (one towing the other) to New York ... and to take a young woman with him.

This doesn't go too well, and Norwood ends up in New York with neither the cars nor the woman, and he begins to make his way back home by bus. He runs into some interesting folks on the way, including a chicken, a British midget, and a pretty girl named Rita Lee. Norwood hooks up with Rita, particularly once her supposed fiance deserts her, and Norwood pays a visit to Joe William Reese to retrieve his $70, before saying farewell to the midget and returning, with Rita Lee, to Ralph.

And that's about all there is to the plot -- which tells you damn little about the novel. It's a road novel (obviously enough). (So too is Portis' The Dog of the South, and, if you think about, even True Grit. I haven't read Portis' other novels, Masters of Atlantis and Gringos.) The delights of the novel -- which are considerable -- lay in the voices of the many characters we encounter, and in the depiction of a certain side of American life. It's a very funny novel. Norwood is an intriguing character -- something of an innocent but not entirely so -- indeed also something of a rascal. The people he encounters are likewise rascals, with their innocent sides (mostly -- perhaps not so much Grady Fring). The book is short, probably just as long as it needed to be, and it doesn't come to any conclusions, because there's no need for conclusions. I liked it just fine, though it's not the masterwork that True Grit is, to my mind. But Portis is indeed a writer who deserves our notice.