The Floating Opera, by John Barth 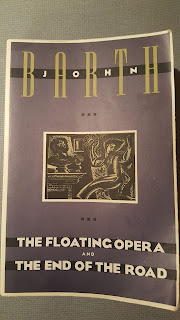 I've been doing Ace Double reviews lately, and this could have been another one, as my copy of The Floating Opera is part of an omnibus edition of John Barth's first two novels (the second being The End of the Road). But I haven't yet read the second book, so I'll stick with The Floating Opera, first published in 1956, though revised (restoring Barth's original ending) in 1967. (Barth's introduction to this edition (perhaps also to the 1967 edition) reveals that the original publisher balked at the darkness of the original ending, and that Barth agreed to a modest alteration -- only to read reviews that criticized that ending!)

Again, a book that is not particularly old (though it was written 60 years ago, so old enough), not a bestseller (indeed, the publisher declined the next book), and yet not forgotten. But not as well remembered as most of the author's oeuvre. Though it is worth remembering that it was shortlisted for the National Book Award in 1957.

John Barth was born in 1930 (making him pretty much my parents' age) and is still alive, having published a novel as recently as 2011 (Every Third Thought). His best known novels are probably The Sot-Weed Factor (1960) and Giles Goat-Boy (1966). Both novels are long, both are arguably SF, both are experimental. Indeed Barth is particularly known as an postmodern novelist, and his 1967 essay, "The Literature of Exhaustion", is a critical postmodern document. The Sot-Weed Factor was his third novel, however, and his first two novels were more traditional and realist, though their themes are noticeably nihilist.

The Floating Opera is the story of one important day in the life of Todd Andrews, a lawyer in Cambridge, Maryland (Barth's home town). We are told from the start that Andrews is writing this memoir sometime in the mid-50s (about when the novel was written), which takes a certain sting from his announcement early in the book that, this day, either June 21 or June 22, 1937, he has decided to commit suicide.

The main action of the novel follows that day. Andrews wakes up next to his mistress, Jane Mack, the wife of his good friend Harrison Mack. He meets a couple of friends at his residential hotel ... two old men, one who defends the value of life to the very end, the other who rails against the depredations of age. Todd -- for reasons probably unrelated to anything the old men say -- comes to the conclusion that this is the day he should kill himself. He completes his day, nothing unusual -- dealing with a lawsuit he is conducting for Harrison Mack (which will either give his friend or his friend's estranged mother the estate the elder Mr. Mack has left), taking the Macks' 3 year old child on a tour of the showboat that gives the book its title, etc. Then he and the Macks attend the performance of Jacob Adam's Floating Opera, and Andrews makes his decision about his suicide attempt ... well, I need reveal no more about that.

But of course, as with most novels ostensibly set over a day there is much more going on. We learn about Todd Andrews' affair with Jane -- actually instigated by Jane and Harrison, partly as a means of celebrating their friendship. We learn that the Macks' daughter may actually be Todd's daughter. We hear about Todd's father's suicide. About Todd's experience in World War I, and especially his encounter with a German soldier. About Todd's career at Johns Hopkins, and about his first sexual experience, with a local girl who later became a prostitute. About the lawsuit between Harrison Mack and his mother, which turns for one thing on his mentally deficient father's habit of preserving his feces late in life. About Todd's physical problems: a heart condition, that may kill him any day; and a prostate infection, that makes him sometimes impotent. And we learn of Todd Andrews' life work, his Inquiry, which began well before that June day in 1937 and continues into the mid-50s.

This is essentially a comic novel, and indeed it can be quite funny, in a blackish way. It's also a somewhat philosophical novel, the central philosophy being Todd Andrews' nihilism, his belief that life has, at its core, no meaning. Todd's life is on the one hand satisfying enough -- he's a very successful lawyer, he makes plenty of money, he has a beautiful mistress. But on the other hand, his life is pretty sad: he has a mistress, but not a wife; he sometimes can't perform in bed; his father committed suicide; he lives in a hotel; his attitude towards the law is that it is a cynical game, etc. The end result of all this -- and of the Inquiry that is his life's work, and the nature of which we only learn towards the novel's end -- is the decision he makes on this fateful morning, and the other decision he makes at the end of that day.

I was reminded of another novel I've covered in this series of reviews: Philip Wylie's Finnley Wren. The two novels share a protagonist born in 1900, a philosophical and often cynical bent, and an oddly inconclusive (but really quite conclusive) resolution, as well as a certain ribaldry. That isn't to say that the novels come to similar conclusions about their philosophies, nor that the advertising man Finnley Wren and the lawyer Todd Andrews are all that similar -- but there certainly are correspondences.

I liked the book a fair bit. It really is quite funny, and always readable, and the dark underside is an effective counterpoint to the surface comedy. I've had a copy of Giles Goat-Boy for decades, and I've long been intimidated by its length. I'm certainly intending to finally tackling that book sometime in the fairly near future -- and be that as it may, The Floating Opera is worthwhile on its own terms.