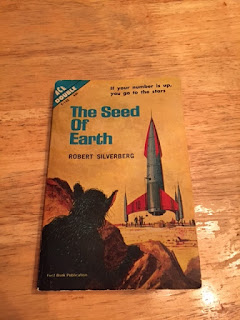 I don't really plan to do an Ace Double review every week, but this is what I've finished. And there's a story, or a couple of stories, behind this book. A couple of weeks ago I was in Spokane, WA, for Sasquan, the 2015 World Science Fiction Convention. Naturally at the con there was a fine dealers' room, with a couple of booksellers who had Ace Doubles -- I always look at the Ace Doubles. But none seemed of particular interest. One of the days we had a bit of free time and decided to explore Spokane a bit, and we visited a couple of antique stores. One of them had a few Ace Doubles for sale -- most were pretty pricy ($20 for a Philip Dick book, which I guess is the way those things work), but they also had this Robert Silverberg double for a more reasonable price. As it happens, I had just met him for the first time in person at the con, and it seemed fated that I buy the book. (I would have anyway -- his books, even his early less mature works, are always at least professional and enjoyable -- one might compare him to John Brunner in that sense (though as I have said, I probably prefer early Brunner to early Silverberg, and later Silverberg to later Brunner).

Later on (at the pre-Hugo reception, in fact) I somewhat bumtiously approached Bob and asked him to sign the book(s), if that wasn't too gauche. It probably was rather gauche, but he kindly signed them anyway, and told me an interesting story about them. Ace, it seems, reported sales, and paid royalties, on each half of an Ace Double separately (makes sense, and usually they were by different authors). In this case, they issued statements saying that The Seed of Earth sold something like 80,000 copies, enough to earn out and make some royalties, but Next Stop the Stars sold only 40,000 (claimed Ace), not enough for royalties. Plausible enough, I suppose, as collections usually sell less than novels, except for the fact that the books are bound together! (Bob's agent was able to get Ace to buck up with the extra money for the second book -- to be sure, I suspect the sales numbers were wholly fictional anyway, and the book probably sold 150,000 or something!)

The novel half, The Seed of Earth, is a 1962 expansion of a 1957 story from Venture, "The Winds of Siros". After its expansion, it appeared (somewhat cut) as "The Seed of Earth" in Galaxy. The full version is about 50,000 words long.

The central conceit is that comfortable Earth has a hard time attracting people to colonize new planets, so a Colonization lottery has been set up, to which all healthy people between 19 and 40 are subject. The only way to get out of it is to have a very young child. If a husband or wife is selected, they must go, and their spouse can either choose to accompany them or abandon them. They are then sent in groups of 100 to a newly found planet -- apparently as the only colonists (seems a bit small of a group to me). The whole setup seems a bit implausible to me, well, actually a lot implausible, but it works as a framework for the story it tells. We follow a group of people involved with the latest selection: David Mulholland, the political appointee who runs the Colonization Bureau, as well as four of the latest selectees: Mike Dawes, a young college student; Cherry Thomas, an entertainer (by implication, a singer, stripper, or whore, as needs must); Ky Noonan, a big man who has tired of the boredom of Earth and who is a rare volunteer for colonization; and Carol Herrick, a painfully shy young woman (on the verge of becoming what was then called an "old maid").

The first few chapters detail the reactions of each of these characters to the selection, and to their short preparation time for the trip. Then they and the other 96 colonists make the journey, and upon arrival, quickly set up their colony and go through the wife-choosing process (no explanation of how gay people would react is offered). Mike has had his eye on Carol, and is fortunate to be able to choose her, while Ky perhaps predictably chooses the more flamboyant Cherry.

The conclusion involves a wholly unexpected development -- it seems that the very first intelligent species humans have ever encountered occupies this planet, and they kidnap the four main characters, who are penned up in a cave for a while, apparently for the aliens' entertainment. The stress reveals to each character something about their inner strengths and failings. This portion is a bit unexpected, and purposely attempts to avoid conventional resolutions to the characters' crises. It's not a particularly brilliant novel, but it has some original aspects, and it's readable enough.

The stories in Next Stop the Stars are all from quite early in Silverberg's career, and they are somewhat varied in tone. They seem to show a young writer trying new things, though for the most part they are fairly routine SF of the period. They are:

The first story concerns Lloyd Harkins, a man from about our time who is mysteriously thrust forward in time, to a much-altered Earth. He is capture by a huge, somewhat gentle, creature who takes him to a crude colony of humans. There are also, noticeably, likewise huge robots. And strange mutants with mind powers. Harkins soon is thrust into rivalry with the brutish leader of the colony, and the rest of the story is about his attempt at escape, and then his decision to take matters into his own hands. It's the pulpiest and weakest of the stories included here.

"The Songs of Summer" is also about a time traveler, in this case a slimy conman from 1956 who ends up in a pastoral future, and decides to upend the social structure of the gentle, somewhat telepathic humans he finds, taking one character's intended girlfriend as his own, introducing religion and economy, etc., until they find their own gentle way to stop him. Somewhat ambitious, not quite convincing.

"Hopper" also deals with time travel. Quellen is a functionary in a crowded future who has a secret: a hideaway in the jungle that he can teleport to whenever he wants. Then he is assigned to solve the problem of the "Hoppers", people being sent from this crowded future back in time, where it's less crowded and jobs are available. A mysterious man is behind all this, and Quellen tries to deal with him but is foiled by his own paranoia, his scheming subordinates, and his personal shortcomings. It's a cynical story, well enough constructed, but, again, not really convincing.

"Blaze of Glory" is a space story, about a somewhat brusque and violent spacer who hates aliens. He's assigned to a mission to a planet with gentle and innocent seeming aliens, and he's the only one who doesn't like them, and he acts very badly. But on the way home, he redeems himself with an act of heroism. The narrator, however, is left to wonder ... what really went on? And did the violent man know something about the aliens nobody else could see? This is OK if pretty minor work.

Finally, "Warm Man" is one of the best known of Silverberg's early stories, and deservedly so. It was the earliest story chosen for the 1976 Best of Robert Silverberg. It's in a sort of John Collier or Shirley Jackson mode, about a bachelor who takes a house in a typical suburb. He seems very friendly, and all the locals seem drawn to confide in him ... even embarrassments, such as their infidelities. This seems to make them better people, but they start to turn on him, before an incident with a troubled boy brings a shocking conclusion. I'd have liked it a bit better if the end was left a bit more mysterious -- there is an inconsistent couple of lines explicitly explaining what was going on, that didn't seem needed. Still, a fine piece.
Posted by Rich Horton at 8:26 PM