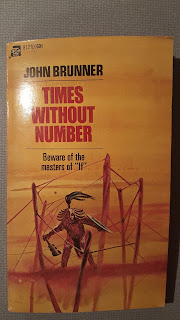 This is one of my favorite time travel/alternate history novels, and it's a novel that to my mind does not get the notice it deserves. The three stories that make up this novel appeared in consecutive issues of the relatively little-known UK magazine Science Fiction Adventures (a companion to New Worlds and Science Fantasy) in 1962: "Spoil of Yesterday" in #25, "The Word Not Written" in #26, and "The Fullness of Time" in #27. These three stories, with minor revisions, became half of an Ace Double, Times Without Number, also in 1962. As with many of his early novels, Brunner later revised and expanded Times Without Number, in 1969.

This book is about Don Miguel Navarro of the Society of Time. It is set in an alternate 1988/1989 in which the Spanish Armada succeeded, and established an Empire. The Moors reconquered Spain, but much of Western Europe, including England, remained under Spanish rule, and the independent Mohawk nation in North America was also allied to the Empire. In 1892 the secret of time travel was discovered, and under the auspices of the Pope the Society of Time was established, and a strict rule set up that history could never be altered, only observed. Besides the aspect of time travel, the Alternate History aspect is interesting -- it's noticeable that in many ways this future, described on the face of it sympathetically, is really quite undesirable -- slavery persists, for example, and the level of technology is much lower.

The first story, "Spoil of Yesterday", concerns a foolish noblewoman who has bought an expensive golden mask of Aztec workmanship -- obviously, Don Miguel deduces, an illegal theft from the ancient Aztec empire. Don Miguel take risk of offending a noblewoman and unnecessarily disturbing his superiors by reporting this theft. Then he becomes involved in solving the mystery of who actually is responsible for stealing the mask from history, and in returning it. It's a lesser story than the other two -- it doesn't seem to be about much, rather, it's sort of a scene-setting work.

"The Word Not Written" is set on December 31, 1988 and January 1, 1989 -- the Quatrocentennial Year of the Spanish Armada's victory is just concluding. Don Miguel is regretting his duty of attendance at a boring party hosted by the Prince of New Castile, younger son of the King and head of the Society of Time. He meets a pretty and intelligent girl, daughter of the Ambassador from Norraway, and they sneak out for a better time on the town. But on returning they learn that there has been a disaster -- a foolish official has fetched Amazons from history, to prove a point, and the resultant chaos has led to the death of the King and near certain war. Don Miguel is recruited to help solve this problem in a terribly dangerous way -- by creating a closed timelike loop, going back in time just a few hours to prevent the disaster. Thus, the story ends up not so much an adventure as a rather serious consideration of time paradoxes.


(I have the issue of Science Fiction Adventures in which "The Word Not Written" appeared. The 1969 revised novel version is expanded from the magazine version by about 2000 words, to 18,500. Many of the additions are at the sentence level -- slight filling out of descriptions and so on. There is also a fairly extended expansion at a critical point, in which Brunner goes into some more detail on the theoretical concerns about the actions taken to form the closed causative loop.)

The last story, "The Fullness of Time", is first rate, and brings the "novel" from "pretty good" to "really good" in my mind. (It is a novella I would dearly love a chance to reprint.) In it Don Miguel, on vacation in California, uncovers what seems to be evidence that the Eastern Confederacy, rivals to the Empire, have been mining in California in the distant past. This seems obviously a violation of the prohibition on altering the past, which is enshrined in the Treaty of Prague, but by some literally Jesuitical logic, it seems that possibly no violation has occurred. However, the mining is stopped -- but it turns out that something much more sinister is going on. There may be a plot to go back to the time of the Armada and alter history so that England wins. Don Miguel, among a host of others, is sent back to 1588 to try to stop this alteration.

The ending is purely brilliant, to my mind. Brunner faces the implications of time travel directly and honestly, and comes to the only sensible conclusion. And he doesn't shy away from that conclusion. (It's a pretty original view, to my mind, though there are correspondences with Isaac Asimov's The End of Eternity.)

"The Fullness of Time" has only been reprinted as part of Times Without Number. I note that there have been a couple recent anthologies called "The Best Time Travel Stories of All Time" or something to that effect -- if I were to do one such, I'd try to include "The Fullness of Time", in among "The Man Who Came Early", "All You Zombies", "The Dead Past", and so on.