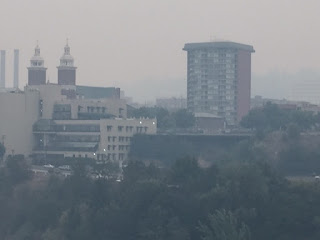 Friday was a dramatically smoky day -- smoke from the various forest fires blew in from wherever ... and the air was very clouded with it. It was very irritating to the eyes, nose, and throat. We saw bicyclists with gas filters and even something that looked like a full-on gas mask. The predictable joke was to call the city Smokane.

I had another 11 o'clock panel, so we began again by attending the Business Meeting, and again I ducked out after the first half hour or so. This time Mary Ann stayed for the whole thing. Much of it was concerned with setting the stage for the more controversial proposals: dealing with some fairly routine issues, for one thing, and introducing and scheduling debate on the more contentious issues.

My panel was on Writing About SF: Yesterday and Today. The subject was SF criticism, and how it has changed from the days of James Blish and Damon Knight to today. My fellow panelists were Gary Wolfe (again, and a very appropriate choice of course, as one of the very best critics of our time), Kameron Hurley, Michelle Sagara, and David Hartwell. I was particularly happy to meet Kameron Hurley, from whom we just bought a reprint for Lightspeed. The panel itself was OK, not quite as interesting as I might have hoped. I was a bit quieter than usual (maybe a good thing!) -- partly out of deference to David Hartwell, who knows a lot and who has a great history as both a critic and an editor in the field. I also have a sense that my non-academic background in criticism (and the fact that I do more reviewing than pure criticism) makes me less qualified to comment on such things.

After the panel I was delighted when the Chinese writer Tang Fei (or Fei Tang, as her badge had it -- I assume in deference to English language naming conventions) whose "Call Girl" I reprinted, came up and introduced herself, thanking me profusely for reprinting her story. My usual response to this is simple -- I'm much more grateful to the writers who give us stories I am so happy to reprint!

I should perhaps mention the Green Room, where program participants can congregate. It's a great place to meet people and talk for a bit, and I probably didn't use it enough (partly because Mary Ann technically wasn't allowed in there). I did get to talk to John G. Hemry (aka "Jack Campbell") -- a very fine writer of fairly traditional Analogish SF -- I remember being in the midst of a neat conversation and having to rush off to a panel, and we never got together again. The Green Room is also the only place I was able to meet (albeit very briefly) Guest of Honor Vonda McIntyre.

Scheduled against the Writing About SF panel was Reading Rare Books, a panel featuring one of my favorite people in SF, Jo Walton. As anyone who reads this blog regularly will know, I do have a certain interest in old and rare books, though I've got nothing on the books that Jo had to show off at the panel. (I dropped by on the way to my panel, to say hi to Jo and to get a hint of what they would be talking about.)

At noon there were some more conflicts. I had signed up for a Kaffee Klatsch with my friend Bryan Thomas Schmidt (who had managed to get caught up in the Sad Puppies controversy), but there were two separate panels I was interested in scheduled opposite it, one of Romance and SF, the other on Classic SF You Should Read. I caught up with Bryan and he said by all means go to the other panels -- for one thing, we get to talk pretty regularly at ConQuesT, for another thing, as it happens he was walking with a guy wondering if he could get into the Klatsch even though it was already fully subscribed -- so I ceded my position to him. I ended up going to the Romance panel (officially titled "The Ties Between Romance, SF, and Fantasy"). One reason is that one of the panelists was Sharon Shinn, a fellow St. Louisan who has written a number of well-received novels, including one I liked a lot, General Winston's Daughter. (Another panelist was Cynthia Felice, a Chicagoan who wrote some fine novels on her own (I remember in particular Eclipses from 1983), and three really delightful novels with Connie Willis: Water Witch, Light Raid, and Promised Land).

At 1:00 there was a panel called SpoCon Presents: Short Story Editors. I don't know what the SpoCon Presents meant -- I assume SpoCon is a regular regional con based in Spokane -- did they run a parallel programming track? Anyway, it featured my longtime friend Ellen Datlow and my boss at Lightspeed, John Joseph Adams, as well as Mir Plemmons, so I figured I'd go see it. It was in the Doubletree instead of the Convention Center, and I got lost on the way, and so I got there rather late. Anyway, it's a topic I've seen (and done) a lot before, and Ellen and John and Mir were sensible enough but I confess I've heard it all before. (Though I'm always glad to listen to Ellen and John anyway.)

The next panel of interest to me was on Baseball in Fantasy Fiction, and not surprisingly it included Rick Wilber as a panelist. along with Bradford Lyau, Pat Mc Ewen, Louise Marley, and Cat Rambo. It was a nicely done panel, but I found myself starting to really drag. I had a terrible headache, and my nose was stuffed, and my throat and eyes hurt -- all, I think, a result of the smoke in the air. Mary Ann and I decided to take a rest, and we headed back to the hotel. After a little while we figured we'd get an early dinner (or late lunch), and we settle on a place called Central Food. But first! -- we decided to look up some antique stores (one of our favorite pastimes). We found one pretty close to downtown Spokane, probably a bit more upscale than we normally prefer. The proprietor was a pleasant guy, asked us if we were in town for the convention "even though we don't look like the others" ... I suppose acknowledgement of the lack of a propellor beanie or equivalent on either of us. The other customers in the store were a couple about our age, and the husband had a University of Illinos shirt. That's my alma mater, so I asked if he had gone there. No, he said, my daughter went there. I got a laugh from that, as I'm more likely these days to be seen in a Clemson shirt than a U of I short, as our daughter went to Clemson. This couple were actually from the St. Louis area (East side, over in Illinois), and we had a nice conversation. Then we went to an antique store a bit north of our hotel. There I found a number of Ace Doubles. Most were kind of expensive (particularly a Philip K. Dick book for $20), but I did find a Robert Silverberg novel/collection for a more reasonable $7. It seemed fate that I should buy it, having just met him for the first time. (I reviewed it on this blog just this past Thursday.)

Then we finally headed to Central Food, in a new looking area just North of the river, on higher ground, amidst a bunch of fancy looking condos. This was quite a nice, and not overly expensive, restaurant. After our meal we spent some time outside, looking at as much of the river as we could see through the smoke. There was a bird's nest for a large bird (an eagle, perhaps?) on top of a pole quite near the restaurant. Then back to the hotel again. 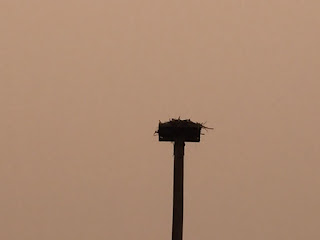 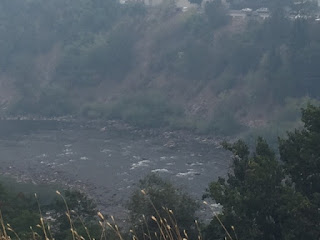 After some rest, I was feeling better. I had run into James Van Pelt in the Dealers' Room, and he had invited me to the Fairwood Press launch party for his new novel Pandora's Gun (along with Ken Scholes' collection, and a couple of other books). This party was at an old hotel, the Davenport, a few blocks from the convention center. Mary Ann decided to stay at the hotel, and I went first to the SFWA suite at the Davenport Grand Hotel, just across from the convention center. I spent some time there talking to Matthew Johnson, a first rate Canadian writer whom I've reprinted a couple of times in my books. Then John Joseph Adams and Christie Yant showed up, and we talked in a group for some time, with several other folks. I also met Brian Dolton, Sonia Orin Lyris, and Cory Skerry (possibly some of these the next night -- things blur.). And others I have alas forgotten at this remove, shame on me.

On finally getting to the historic Davenport, I made my way to the Fairwood party. I ran into a few people I've met before -- Patrick Swenson, Jack Skillingstead, and James Van Pelt, but I spent most of the time talking to Ken Scholes, an excellent writer who I had not previously met. Ken talked about his writing, of course, but also about the intriguing experimental treatment he is taking for his PTSD. This last is pretty cool stuff -- Ken writes some about it on his website.

It got pretty late (though not so late (spoiler warning!) as Saturday night), and I negotiated the shuttle system to get from the historic Davenport back to the Red Lion River Inn. I have to say the shuttles worked very well indeed. One of the bus drivers discussed the whole facilities issue -- apparently the new Davenport hotel, the Grand, was only finished a couple of months prior to the convention. And the most famous previous event at this location was perhaps the Olympic Figure Skating trials where Tonya Harding was involved (it is alleged) in a scheme to injure Nancy Kerrigan.