Newish, Not a Bestseller, hopefully not Forgotten: Remains, by Mark W. Tiedemann 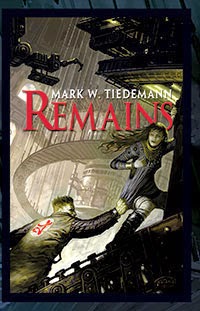 Not ready to post about the last Old Bestseller I've read, so I'll post a review of a fairly recent novel, from 2005, Science Fiction, certainly not a bestseller (alas) … and hopefully not forgotten, but a novel that really never got a lot of notice. I say not a lot, but I should note that it was shortlisted for the 2005 Tiptree Award (which frankly surprised me (and the author) as gender does not strike me as a particularly front and center concern of the novel – that said, I'm happy it got the nod). At any rate, however, the novel in question, Mark Tiedemann's Remains, was published by a small press, BenBella , which is best known for “smart pop” books (examples include an Adam-Troy Castro book on Amazing Race, the TV show; and a Mad Men cookbook; as well as books on True Blood, Divergent, etc.). To put it simply, the novel qualifies as a prime example of the phenomenon called “Death of the Midlist”.

Full disclosure here – Mark Tiedemann is a friend of mine, a fellow St. Louisan, and I regularly attend a book group he hosts at Left Bank Books in the Central West End of St. Louis. This month we (the group members) had decided to read one of Mark's books, as he had to miss last month's get-together due to arm surgery. And the book we chose was Remains.

Remains is a pure Science Fiction novel, and also a mystery, and a love story, and it integrates all those elements quite seamlessly. It is set in the 22nd Century, mostly on Aea, an O'Neill cylinder at the Earth/Moon L5 point. Earth has first shunned its space colonies after they asserted their independence, and subsequently they seem to have experienced some apocalyptic disaster, leaving the colonies essentially isolated, with a combined population of only a few million. These colonies are on the Moon (Lunase), in Earth orbit (Aea and others), on Mars, and in a few other places.

The novel opens with Mace Preston, a security professional for PolyCarb Corporation, investigating a disaster at Hellas Planitia on Mars, where a PolyCarb manufactured shield was destroyed in a dust storm. Mace has shoehorned himself into the investigation because his wife Helen was at Hellas Planitia. But before long he is shouldered aside, forced to concede his wife's death, even as the corporation denies she was at the site, and even as her body was never found.

A few years later he is back at Aea, having retired and living quite comfortably off the proceeds of his wife's life insurance as well as some settlement money PolyCarb has given him. After some time privately trying to find out what really happened on Mars, he has largely given up, but has not precisely recovered from his wife's death. A friend, a high-level PolyCarb employee, throws him a party, and he surprises himself by having a good time and going home with Nemily Dollard, a fairly recent immigrant from Lunase.

Nemily, it turns out, is a cyberlink: due to a congenital disorder, she has a mental handicap that is cured by a variety of implants in her brain, that she can switch out as desired: one for mathematical assistance, one called “sensualist”, a synthesist, etc. This is the most Sfnally interesting part of the book: it's an interesting idea on its own, and it's used well to portray Nemily's own difficulty with accepting her individual identity – most notably, she has a hard timing believing she can love. (And an earlier career included “ghosting” – taking on other personalities via her cyberlink for prostitution (a career which does not seem to be held in particular disdain in Aea's culture, I note).)

In rapid order, Mace and Nemily are falling love, while both their pasts begin to intersect. Nemily was used by someone from Lunase to smuggle in some contraband when she emigrated to Aea; and it begins to seem that this person might be related to a series of disasters on various space habitats. It also begins to seem that these disasters might be related to the one on Hellas Planitia that killed Mace's wife – only, is she really dead?

That sets up a pretty neat thriller plot, which has a good and slightly (plausibly) messy resolution. The central love story – or pair of love stories, because the question Mace's marriage to Helen, and whether or not she loved him, is also critical to the book – is quite nicely handled as well. And the book is also full of nice Science Fictional ideas.

I don't think it's fair to call the book forgotten, after only 10 years. (And it is still available from BenBella, and at least at a couple of St. Louis bookstores, including Left Bank Books.) But it is a book that never seemed to me to get the attention it deserved on first release, and it's a book that still deserves a look.
Posted by Rich Horton at 3:52 AM