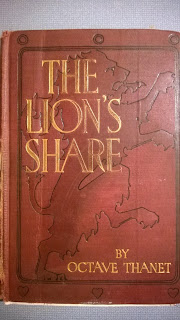 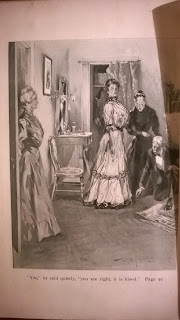 It's always neat to run across an old book by a writer I've never heard of, and to find that they have an interesting story. Octave Thanet was the pseudonym of Alice French (1850-1934), born in Massachusetts (granddaughter of a Governer of that state), but who lived from the age of 6 mostly in Iowa and Arkansas. She was apparently a Lesbian, living with Joan Crawford for 40 years, though that seems to not to have been accepted widely until more recently (one site I saw calls Crawford her "widowed friend", apparently true but not the whole story -- another reference suggests that Crawford's husband's death was "mysterious"). As usual, contemporary Lesbian critics seem to stretch rather to find "coded" themes in her stories -- perhaps that's true, but I confess I found nothing of the sort in The Lion's Share, which of course doesn't mean much beyond that she was writing what she thought might sell, and avoiding controversy. Thanet was a very popular writer for a time, particularly, it seems, in the 1890s. Her novel Expiation seems to get, forgive me, the "lion's share" of praise.

Thanet's views, for the most part, for good and bad, were consistent with popular attitudes of the time, particularly in racial matters. The Lion's Share, noticeably, is full of absurdly racist depictions of Japanese characters (which is not to say they were regarded as bad -- in fact, by and large, they are portrayed as good people, but in the most patronizing fashion). Thanet was pro-Capitalist, and it's a bit amusing to see some critics regard that as more objectionable than her racism.

Thanet's primary reputation was as a "local color" writer -- apparently many of her stories were set in Iowa or Arkansas, and were highly regarded for capturing local landscapes, mores, and dialect. The Lion's Share is an exception to this, however. It was published in 1907, and it's set primarily in San Francisco, which ought to be a hint as to a major event in the story! The original publisher was Bobbs-Merrill. My edition might be a first, but there's a pasted in page on the inside cover that suggests it was distributed by something called the Tabard Inn Library -- basically, you paid $1.50 for lifetime membership, and a nickel a week to borrow a book. (There are fairly nice black and white illustrations by E. M. Ashe, as well.)

It opens with Colonel Rupert Winter, on furlough from the Philippines, visiting the son of a friend, at Harvard. He witnesses the aftermath of the suicide of a young man named Mercer, gathering that Mercer killed himself because the depression of 1903 had ruined his family, partly because of the unwise investments of his older brother Cary, whom he meets as well.

A few years later, Colonel Winter, now invalided out of the Army, is in Chicago boarding a train, to accompany his sister-in-law, the rather pompous Mrs. Melville Winter, and his much more interesting Aunt, Rebecca Winter, on a trip to San Francisco. He happens to overhear someone he recognizes as Cary Mercer, seemingly plotting something nasty. The Winter women are taking young Archie Winter with them, and of a sudden it seems kidnapping is a possibility. Also on the train is Edgar Keatchem, a leading Robber Baron of the time, it seems, whose machinations seem to have contributed to the failure of the Mercer steel mill ... and who now threatens the owner of the railroad on which they ride. Finally, we meet Janet Smith, a Southern woman of a certain age (not a debutante, but not too terribly old) -- she's acting as Rebecca Winter's companion, but Mrs. Melville Winter is convinced she's a nasty schemer.

Not without incident (a robbery attempt) they reach San Francisco. Colonel Winter is concerned on numerous grounds -- he finds himself strangely attracted to Janet Smith, but he suspects she may be somehow connected to the putative kidnappers. And indeed Archie is kidnapped, under very odd circumstances ... and in the end he seems to quite enjoy the experience. Cary Mercer is involved, at first snubbing Colonel Winter ... Other Harvard boys are also involved. Then there is an attempt on the life of Edgar Keatchem, who seemed to be at the center of the scheming.

It's all quite a tangle, and it comes to a head with a certain major historical event in San Francisco in 1906. Things of course sort themselves out quite neatly. All the supposed potential villains that we have met turn out to be basically all right (if perhaps in some cases temporarily misguided), with one mostly offstage individual the real bad guy. The course or true love runs straight. Mrs. Melville Winter is appropriately put in her place, while Aunt Rebecca is vindicated. And the Colonel's soldierly instincts are to be sure the most virtuous of all.

Hmmm ... all in all, a minor work but amusing for the most part. Predictable as popular fiction so often is, but entertaining too. Another writer who I'm glad enough to have sampled, but of whose work I don't feel any particular need to read anything more.
Posted by Rich Horton at 8:07 PM