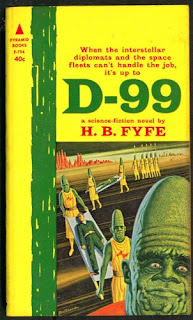 Horace Browne Fyfe (1918-1997) was an active SF writer from 1940 through 1967, with the bulk of his work appearing between 1947 and 1963. He appeared mostly in Astounding, though by the '60s often in Fred Pohl's magazines (Galaxy and If), and he appeared elsewhere as well, in places like Amazing, Fantastic, and Gamma. The similarity of his name to another writer named H. B. plus something to do with a flute-like instrument (H. Beam Piper), along with the fact that both writers appeared often in Astounding, at about the same time, led to some speculation that one name or the other was a pseudonym, which is not true. Indeed, rather than Piper, Fyfe reminds me more of another Astounding/Analog writer, Christopher Anvil (Harry Crosby), and indeed also of a similarly obscure member of John W. Campbell's stable, Everett B. Cole.

The novel at hand, D-99, was published in 1962 by Pyramid, in paperback. Fyfe's most famous stories might be the five concerning an organization called the Bureau of Special Trading, or more colloquially, the Bureau of Slick Tricks. These stories appeared in Astounding between 1948 and 1952. The ISFDB lists D-99, his only novel, as another Bureau of Slick Tricks story, but though there are some similarities of theme and tone, that's not correct.

D-99 is a special division of the Department of Interstellar Relations, so named because it is on the 99th floor of the Department's building. This novel depicts a single night in the Department's history. It's job is to find ways to rescue Terrans from alien prisons, or other alien predicaments. This night there are four planets on which Terrans are in trouble: Tridentia, where a man named Harris has been captured by an aquatic race; Greenhaven, a puritanical Terran colony where a woman reporter, Maria Ringstad, has been imprisoned for violating the planet's rather strict moral rules; Yoleen, where one Gerson has been imprisoned for no discernible reason; and Syssoka, where two spacemen, Taranto and Meyers, have crashlanded and thus offended the local species.

The main viewpoint character at D-99 is Willy Westervelt, a young man, a pretty new recruit. The others with him are his boss, Smith; the boss's chief assistant, Pete Parrish; the genius gadgeteer Bob Lydman, who was himself once confined in an alien prison; and three woman, a couple of secretaries and a switchboard operator: Simonetta, Beryl, and Pauline, and well as a couple other minor characters. Westervelt is infatuated with Beryl, a bottle blond, to the point of outrageous sexual harassment, but alas she is more interested in being harassed by Parrish. Simonetta is the girl he should be after -- she clearly likes him. That whole aspect of the book is wildly sexist, in a vaguely Mad Men-ish fashion.

In between trying to steal a kiss from Beryl, Willy, who has very little agency (nor talent, far as we can tell) witnesses the department's monitoring the situation on each of the above-mentioned planets. At least in the story as show, we see very little that D-99 actually does to solve the problems. In fact, probably in at attempt to be true to life, sort of, the book shows, of the five prisoners, three successful rescues, one failure, and one left hanging at the end of the night. In between the chapters set at D-99 we get chapters from the points of view of the various imprisoned Terrans -- these in many ways are the more interesting.

There is another, rather trivial, crisis for D-99 to deal with: a power failure has stopped the elevators from working, trapping them on the 99th floor. (Also, implausibly, the doors to the stairways are locked because, you see, electricity is needed to open them -- which is not how such doors work, precisely because of the possibility of a power failure.) This means the D-99 folks need to stay late at work, and eat dinners like reconstituted martinis.

Anyway, this is an awfully trivial piece of work, not as interesting as the Bureau of Slick Tricks stories, not really very interesting at all. It is further weakened by Willy Westervelt's ineffectiveness ... it's hard to root for him, or even to see why he was hired. The sexism is, I suppose, much of it's time, but it still grates. I've seen other Pyramid novels from this period that were similarly trivial -- they seem to have been desperate, almost, and perhaps in a case like this to have turned to a veteran writer of short fiction and asked for a novel, getting in response a padded, ill-structured, thing that may have been based on unfinished ideas for a few shorter pieces.