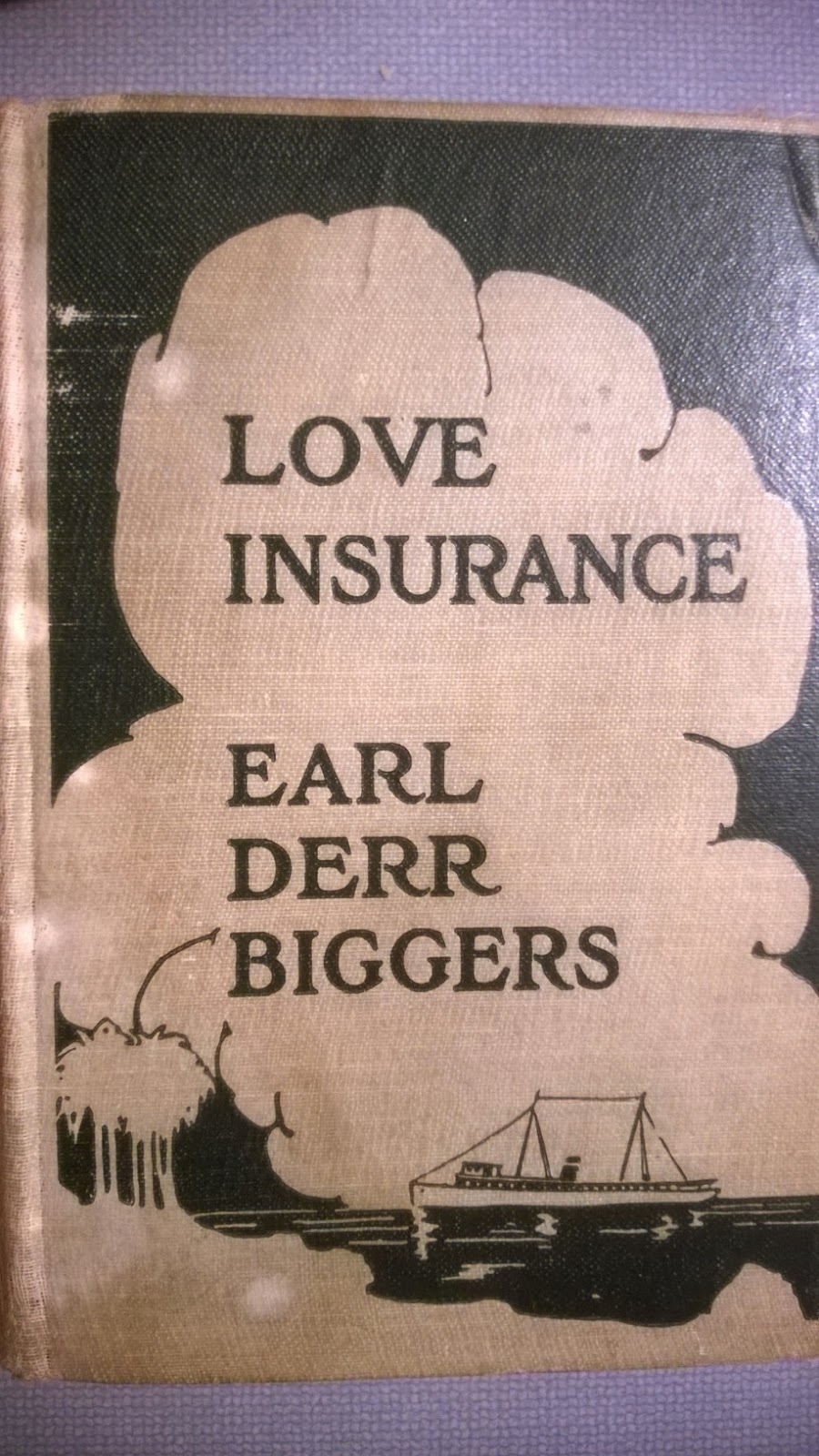 
Earl Derr Biggers (1884-1933) was an Ohio native, educated at Harvard, who worked for the Cleveland Plain-Dealer before turning to fiction and plays. He had a fair amount of success early on, and a number of his novels were filmed, but his real success came somewhat late in his shortish life, with a series of books about a Chinese-American detective in Honolulu, Charlie Chan. (Chan was based on an actual Hawaiian detective of Chinese descent, Chang Apana.)

Love Insurance comes from earlier in Biggers' career. It was published in 1914. Like a surprising number of the books I cover in this series, it turns out to have been the basis for a fairly significant movie. In this case the movie was One Night in the Tropics (1940), the first film to feature Abbott and Costello. (The two have a fairly minor role in the film, but apparently stole the show, among other things doing an abbreviated version of "Who's on First?") (Love Insurance was also twice made into a silent movie.)

The book opens with a British aristocrat, Lord Harrowby, visiting Lloyd's of London's New York office with a proposition: he wants them to insure the prospect of his marriage to an American heiress. It seems he needs her money to settle his debts, and if for some reason the marriage doesn't go off, at least the insurance policy will clear what he owes. Lloyd's sends a young man, Dick Minot, down to Florida where the wedding is scheduled to keep an eye on Harrowby, and on the others involved, and make sure the wedding goes through.

On the train to Florida, Minot chances across a very pretty girl; and indeed after the train breaks down, he and she engage an automobile to take them the last stage to their destination, San Marco, FL. Of course it turns out that the girl is Cynthia Meyrick, and she is headed to San Marco to marry Lord Harrowby. (San Marco is a real place, now a neighborhood in Jacksonville, but back then apparently a separate town.) It will hardly come as a surprise that Minot has already fallen for Cynthia, and that he is now faced with the agonizing duty to honorably fulfill his mission for Lloyd's and resist the temptation to let the wedding fail to come off and leave him free to court Cynthia.

And so he does, even as a whole variety of occurrences conspire to interfere with the wedding: a jewel thief, blackmailing newspapermen, a rival claimant to Lord Harrowby's title, Lord Harrowby's apparent cold feet, etc. etc. There are other comic bits, most notably a friend of Minot's who makes money by selling jokes to a rich old lady so she can get a reputation as the wittiest woman in San Marco.

We all know pretty much how things will conclude. The novel gets there bouncily enough, though often in quite preposterous fashion. It fits into the category of books that it doesn't surprise me were once popular, but which don't seem destined to ever be read much again, and which don't seem to deserve a revival.

My edition seems to be possibly a first, from Bobbs-Merrill. It was illustrated, pleasantly enough, by Frank Snapp. The 1940 movie, by the way, is a loosish adaptation, though it does retain the fundamental plot devices. But for example San Marco has become a South American country instead of a Jacksonville exurb. And the Abbott and Costello characters are not to be found in the book (though they may be vague amalgams of a few different characters). Still and all, seems like a movie that might be worth checking out.
Posted by Rich Horton at 8:45 PM