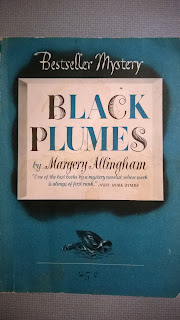 Margery Allingham (1902-1966) was one of the Grandes Dames of British mystery writing in the middle of the last century, very well known -- perhaps only Agatha Christie was more famous among British women mystery writers of her time. The bulk of her books featured Albert Campion, an aristocratic character, sometimes detective, sometimes adventurer or spy. I think I read one or two of those back in the day, but I can't say I'm terribly familiar with her.

Black Plumes struck my eye not because I wanted to read something else by Allingham (though that was a plus), but because of the publication venue of the edition I found. It's a reprint in the "Bestseller Mystery" series by Lawrence E. Spivak. This was part of Mercury Press, the original publishers of The Magazine of Fantasy and Science Fiction (as well as Ellery Queen's Mystery Magazine); and indeed the "book" has the look and feel of early issues of F&SF or EQMM. The book was originally published by Doubleday, Doran in 1940. This edition seems to have come out in about 1942. A note inside the book states "Sometimes [Bestseller Mysteries] are reprinted in full, but more often they are cut to speed up the story ...". Black Plumes in this printing seems perhaps 63,000 words -- probably representing a slight cut from the original edition.

This is one of the relatively few Allingham mysteries not to feature Albert Campion. The detective is one Inspector Bridie, from Orkney, and he's an amusing enough character, but not really that important. The book centers on Frances Ivory, a 20 year old woman who at the beginning of the book is visiting her intimidating grandmother Gabrielle, complaining that her elder half-sister Phillida's husband, Robert Madrigal, is suggesting that she marry his odious business partner, Henry Lucar. Lucar is a pushy young man who gained a mild reputation as a hero for saving Madrigal on an expedition to Tibet with the notorious adventurer Dolly Godolphin, who died in the Himalayas. Frances is also upset because some disturbing things are happening at the art gallery owned by her father, but run by Madrigal and Lucar in her father's absence. The latest issue is a slashed painting, and the painter, David Field, shows up to complain. Field had painted Frances when she was 14 ... now she's 20, and he seems suddenly attracted, as she is to him. Things get further complicated when Field suggests they pretend to be engaged, in order to deflect Lucar's attentions.

That's the setup ... and then comes the murder. Robert Madrigal disappears for a few days, before he's discovered stuffed in a closet. At the same time, more or less, it is revealed that Dolly Godolphin is not dead after all ... he was rescued by monks at a lamasery, and after a few years is finally returning to England. Evidence seems to point to either David Field or Henry Lucar as the main suspect. Frances finds herself shading the truth slightly, about events she witnessed the night of Madrigal's disappearance, in order to protect David Field. Meanwhile Henry Lucar has apparently fled to America.

Lucar's a convenient villain -- and he's a bad guy, all right -- but that means he can't possibly be the murderer, and so it proves to be. So the novel turns on Field's apparent possible guilt, and Frances' decision to protect him, despite her fears he may really be guilty. Godolphin returns to England, and there are further revelations of tangled relationships among Madrigal, Godolphin, and Field, and the fact that all of them were at one time or another involved with Phillida. Inspector Bridie seems to know when one is lying ... And then there is grandmother Gabrielle, trying to control events in her imperious Victorian fashion.

It's a nice book, classic crime fiction of its era, with a strong and nicely resolved murder mystery at the core, and an affecting enough romance plot as well. I liked it -- Allingham seems worthy of her reputation even in this book not featuring her main detective character. The abridgement, assuming the book was abridged, isn't obviously noticeable.
Posted by Rich Horton at 9:35 PM