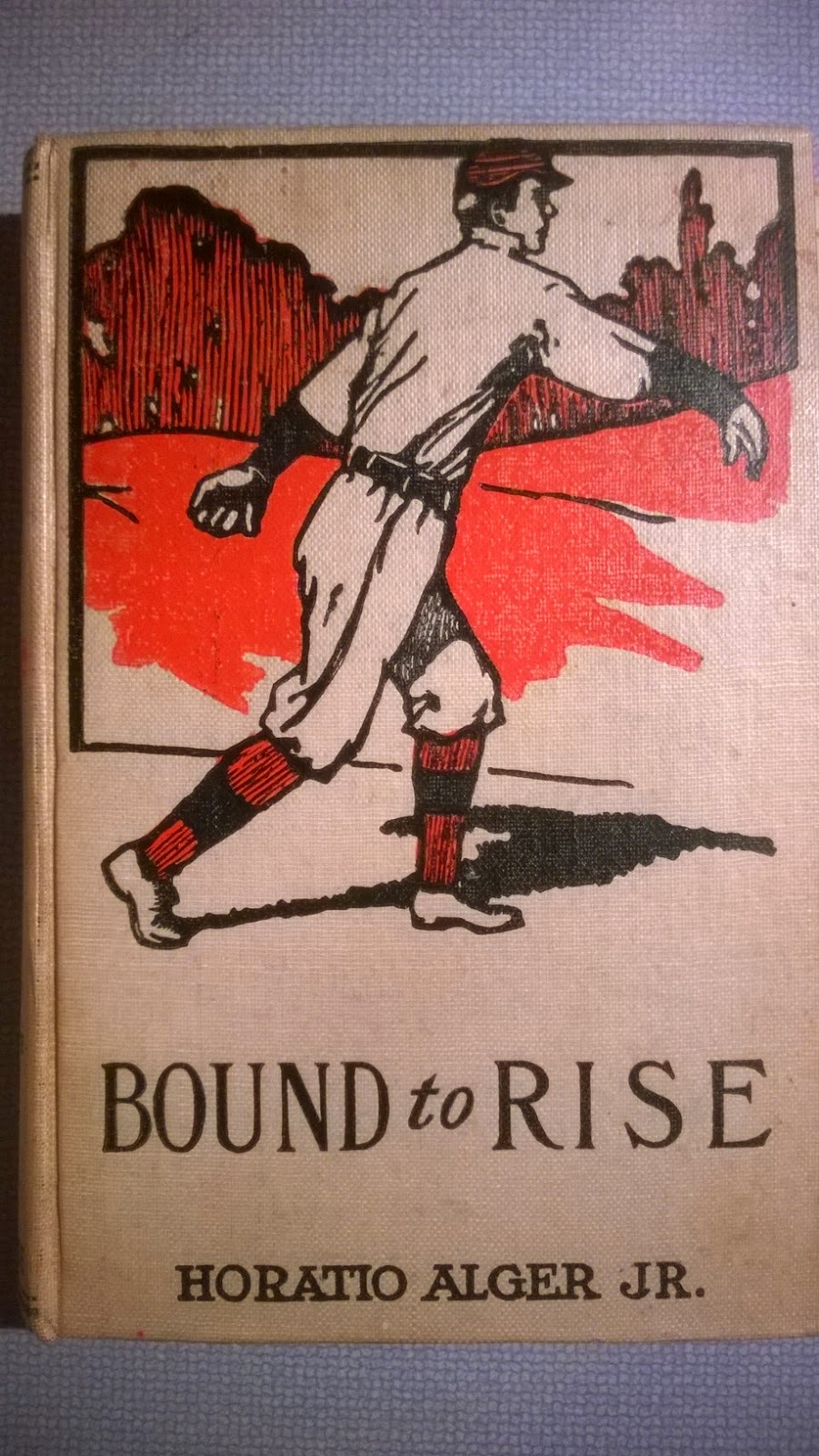 Back to the later middle 19th Century, and one of the most famous American popular writers of that time. Horatio Alger is best known for “rags to riches” stories of poor young men making their fortunes through hard work.

Horatio Alger, Jr., was born in 1832. His father was a Unitarian minister, of old American stock (several Pilgrims were among his ancestors), but not well off. Young Horatio was a good student, and ended up graduating Phi Beta Kappa from Harvard. He became a minister himself, but was eventually dismissed after allegations of overfamiliarity with the young boys in his congregation. Alger had published occasion stories, poems, and articles to this point, and he turned to more active writing. A few books for adults followed, with limited success. His métier was established with the publication of Ragged Dick in 1868. Most of the books that followed (around a hundred by the end of his life) were very similar: a poor boy, through hard work (and often enough the fortuitous financial assistance of an older wealthy man who the boy might impress through courage or honesty), attains respectably middle class status. Later in his life Alger’s books became a bit more sensational in content, in response to changing public taste. Though his books sold reasonably well, his financial position was never secure. He never married, and that, coupled with the early accusations that cost him his ministerial career, along with veiled references attributed to Henry James, or discovered in some of his books, leads to the assumption by many that he was homosexual, though no hard evidence is available. (Not too surprising, given the views of the times, and the likely affect any such revelation might have had on the sales of his books for boys.)

Alger’s reputation was probably at its highest in the decades just after his death, when reprints of his books sold very widely. But by the middle of the century he was no longer much read, and frankly I doubt he will ever be much read again.

As far as I can tell the book I read, Bound to Rise, is from 1872. It is a reprint, from at a guess somewhere around 1920, published by M. A. Donohue, as part of a series of very inexpensive reprints.

Bound to Rise seems entirely typical of Alger's output. As the story opens, Harry Walton is 14 years old (though the first page says 12 … but 14 is soon after established as correct). His father is a poor farmer in New Hampshire, with six children, just barely scraping by until his cow dies. He is forced to buy a new cow on credit from miserly Squire Green. Harry, after finishing school as the prize student, decides to go off on his own and find a job, hoping to pay back his father's debt.

He spends some time work in a shoemaker's shop, and earns some decent money, while virtuously refusing to waste it on clothes or pool or cigars or any other vice. Thereby he makes an enemy of a dissolute fellow worker, who is always in debt to his tailor. Harry's first catastrophe is when he loses his pocketbook and the other boy steals it … but that is soon rectified. Then the shoe business slows, but Harry finds a place with a magician. Soon he's making even more money – enough to pay off his father's debt, but disaster strikes again when Harry is robbed at gunpoint. In this case he is saved by an even more fortuitous event (the thief steals Harry's fine overcoat, but leaves him his own shabby one in recompense, and forgets that his (the thief's) pocketbook, with even more money than was stolen, is in the overcoat). The novel ends, somewhat abruptly, as the magician, having fallen sick, releases Harry to his next job, his dream job, working for a printer. (Harry is fascinated by Ben Franklin, and eventually wants to be an editor.) Before taking up his new position, Harry returns home to pay off his father's debt, to the discomfiture of the evil Squire Green.

There's little enough action there, to be sure. And if the novel seems incomplete – it was: there was an immediate sequel, Risen from the Ranks. It's really not terribly interesting. Alger's style was quite prosy, and moralizing. He also had the habit of half-describing something interesting, then saying something like “but our story need not dwell on this detail ...” and going on. Women are not very present in the novel, and there is never a suggestion that Harry even notices girls, nor that he ever thinks of a relationship with one. And Harry's path is quite straightforward … he is a hard worker, and thrifty, but otherwise opportunities are thrown willy-nilly in his path, and difficulties are overcome with sheer good luck. All in all, just not a very good book, but it is possible to see why it and its fellows were once very popular.
Posted by Rich Horton at 8:25 PM