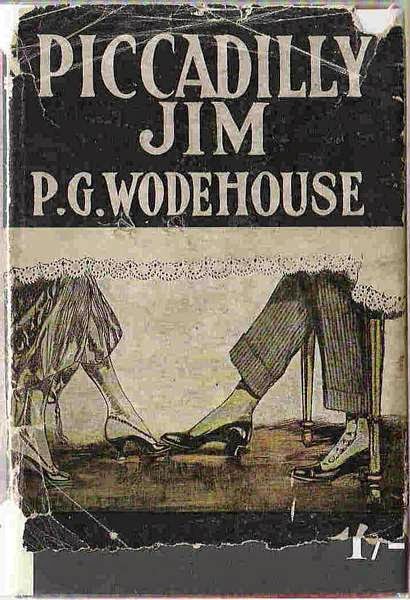 P. G. Wodehouse (full name Pelham Grenville) was born in England in 1881, though he lived in China until he was three. His parents planned a career in banking in Shanghai for him, but he didn't much like banking and found he had a knack as a writer. His early work was mostly for newspapers. His first stories to make a somewhat lasting impression were perhaps vaguely autobiographical, concerning a young man named Psmith, who, like Wodehouse, tried his hand at both banking and journalism.

Though in some ways seemingly quintessentially English, Wodehouse's career was arguably built in the U. S. He came over in 1909. Some of the early Bertie Wooster stories were set in Greenwich Village. His best-remembered early novel, Something New, appeared in the Saturday Evening Post in 1915. Perhaps most importantly, he met Jerome Kern and began writing musical comedies for Broadway. Though most of his Broadway work seems out of the repertory today (save perhaps his modest involvement in Cole Porter's Anything Goes, and one song he wrote for Show Boat), at the time he was very popular and fairly influential. Wodehouse split his time between England, France, and the U.S. until 1947, after which he moved permanently to the U. S., as a result of the (understandable but still perhaps excessive) hard feelings in Britain as a result of his having given 5 radio talks while interned by the Germans during the Second World War. MI5 investigated his actions, and determined that while he was naive, he was not a traitor, nor did he materially benefit the German war effort. However, he still refused to return to England, even after he was knighted very late in his life. Wodehouse died in 1975.

He is best known for a variety of series characters: Lord Emsworth, the owner of Blandings Castle; Archibald Mulliner; Psmith; and most of all Bertie Wooster and his valet Jeeves. Over the years I've read a great many stories in all those series, and many other standalone novels, with great enjoyment. Wodehouse excelled most of all in his comic prose; and secondarily in his intricate and inspiredly silly plots.

I ran across Piccadilly Jim in an antique store. I had not heard of it, and I noticed its early date, so I assumed it was fairly forgotten, though that turns out not to be quite true. It first appeared as a serial in the Saturday Evening Post in 1916, and was first issued in book form by Dodd, Mead in 1917. My copy is from Dodd, Mead, possibly a first (Good condition, no dj). It's signed by someone named Campbell Jackes, dated (I think) Feb. 6, 1917. (The date could be 6/17, with what looks like Feb being something else.) (I do like to see these signatures in books, which if nothing else reliably support the notion that standards of handwriting were much higher a century ago than now.) The book is illustrated, quite nicely, by May Wilson Preston. (It's dedicated to Wodehouse's stepdaughter "Lenora, conservatively speaking the most wonderful child on Earth". (Wikipedia says her name was actually Leonora.))

The story is a typical Wodehouse romantic comedy. Peter Pett is a wealthy New Yorker, ruler of his business, but henpecked to death in his home, after his marriage to Nesta, who has an odious son named Ogden, and who is also fond of allowing penniless Bohemian types to stay in their home. Mr. Pett's only ally is his red-haired niece Ann Chester. Nesta's great rival is her sister Eugenia, who married a former actor, Bingley Crocker, and moved to London. Eugenia is angling (implausibly, to say the least) to get Bingley a peerage. The fly in that particular ointment is Bingley's son by an earlier marriage, Jimmy Crocker, a former newspaperman who has been making a reputation in London as "Piccadilly Jim", for his rackety exploits. It turns out he also made an enemy in his previous career, having made fun of Ann Chester's poetic efforts in his newspaper column.

The plot turns on the Petts' visit to London to fetch Piccadilly Jim home, and on Ann's plot to have Ogden kidnapped and sent to a veterinarian to straighten out his nutritional and exercise habits. Bingley Crocker pretends to be his own butler, and impresses Peter Pett with his knowledge of baseball. Jim meets Ann and falls hard for her (having forgotten her poetry), and realizing she hates "Piccadilly Jim" for some reason, pretends to be his father's son in his role as butler. Back in New York, Jim becomes involved in Ann's kidnapping plot, but complications ensue when it turns out there are real criminals on hand, trying to steal an explosive invented by another of Nesta's protegés. Also there is the threat of Lord Wisbeach, who wants to marry Ann ... etc. etc., of course, this being a Wodehouse plot.

This is all good fun. It's not quite Wodehouse at his fully developed best ... the prose is fine, and often Wodehousianly funny, but not so consistently as inventive as later Wodehouse. The plot is complicated but less illogically logical, if you see what I mean, than the better later stories. It would be easy to imagine that this was a decent early Wodehouse that had been eclipsed in reputation by his later stuff.

And to some extent that's true ... except that Piccadilly Jim has been filmed three times! First in 1919, starring Owen Moore, then in 1936, starring Robert Montgomery, then again as recently as 2004, with the great Sam Rockwell as the title character, and such other fine actors as Allison Janney, Brenda Blethyn, and Tom Wilkinson on board as well. I wanted to rent the movie before writing this review ... but alas, it's not available at Netflix, or pretty much anywhere else, it seems. Used copies run for $20 or $30, with no obvious guarantee they'll even play on U. S. DVD players. The movie got decent if not ecstatic reviews ... and, hey, Sam Rockwell! But it just doesn't seem readily available.