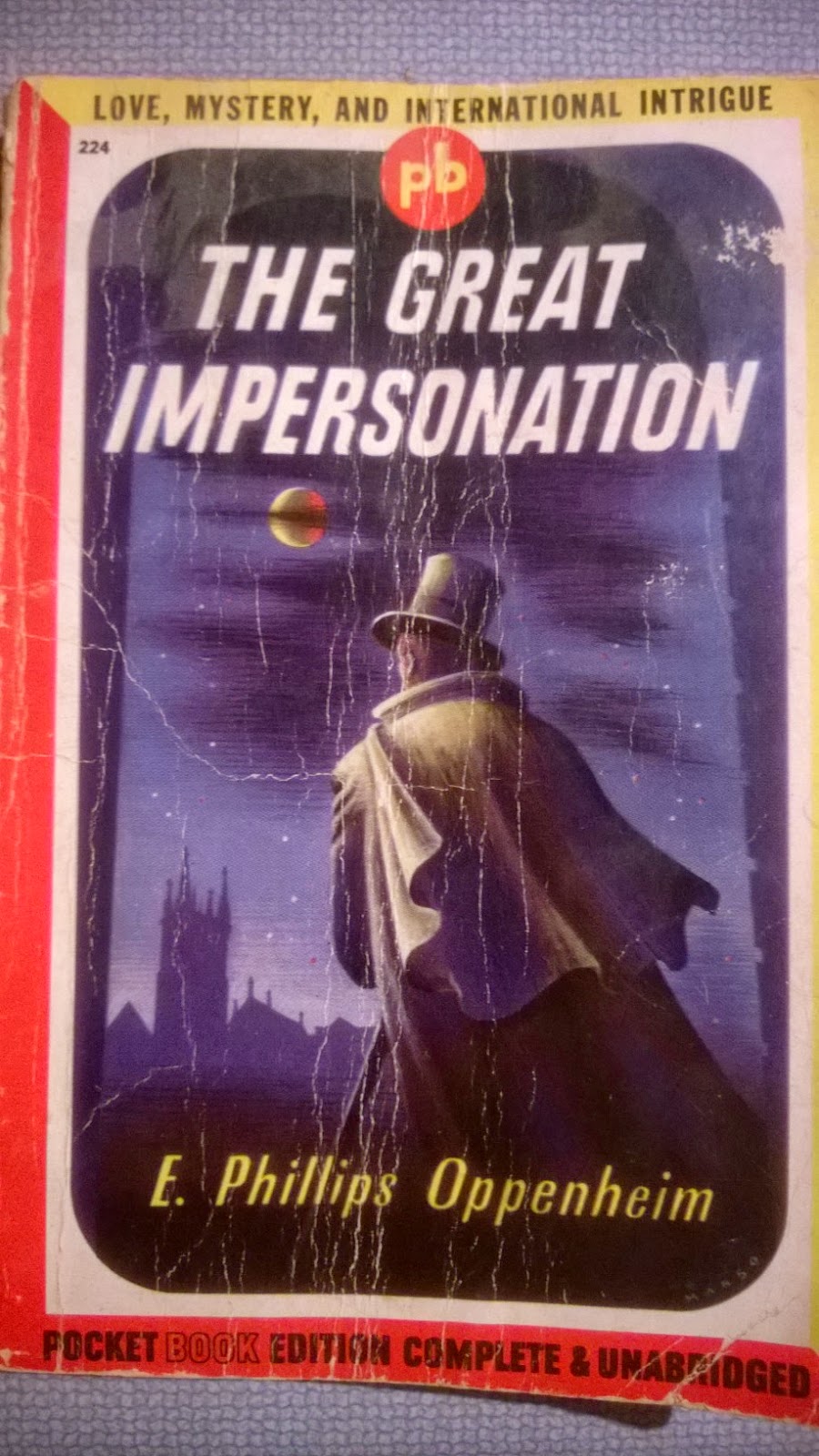 Here's another book that fits this blog's overall theme pretty much perfectly: it really was a major bestseller on first appearance (the 8th bestselling book in the US in 1920 according to Publishers' Weekly); and by now it is being forgotten, though not as completely as some other books. (You can find "new" copies at Amazon, but they look like rather inferior POD editions.)

E. Phillips Oppenheim was a very prolific and successful writer of thrillers. He was born in London in 1866, and died at his house on Guernsey (one of the Channel Islands) in 1946. He seems to have been a writer his whole adult life (though he worked for the Ministry of Information (presumably writing!) during the First World War, and before that he worked in his father's leather business, one assumes until he made enough money from writing to quit). His first novel appeared in 1887, and he published over 100. His life seems, from the Wikipedia description, to have been fairly uneventful, and probably fairly happy. He married Elise Hopkins in 1892, they had one daughter, and a yacht and a French villa as well as the house on Guernsey.

The Great Impersonation is far and away his most famous novel. It was published in 1920. According to my Pocket Books edition, the first American printing was from Little, Brown in January 1920. The Little, Brown edition went through 20 printings, and there were at least 23 printings of the A. L. Burt edition (Burt was a reprint hardcover publisher, one of a few houses that served the same role, more or less, as mass market paperbacks did beginning in the late '30s). My copy is from the first printing, dated June 1943, of the July (!) 1943 Pocket Books edition.

It's a pretty fun and implausible mixture of spy story and gothic romance (with a mystery plot too). It's set in about 1913, as tensions increase between Germany and England. Everard Dominey, a dissolute Englishman, is drinking himself to death in East Africa when he runs into the German Baron Leopold von Ragastein, who bears a remarkable resemblance to him. Both men have been exiled from their homelands after being accused of causing the death of a rival for their lover's affections (though in Dominey's case the woman was his own wife, in von Ragastein's case he was the adulterer who caused his lover's husband's death), but von Ragastein has borne up much better. He hatches a plot to regain favor in his homeland by taking over Dominey's identity and becoming a spy in England. He leaves Dominey for dead in Africa, and decamps to England.

There he runs into a variety of complications. Dominey's wife seems certain he is not her husband: he is much colder and more controlled than Dominey. But she has been on the edge of madness since her husband killed Roger Unthank, her presumed lover, whom she is convinced is haunting her. He also encounters his erstwhile lover, Stephanie von Eiderstrom, who is also convinced he is not Everard Dominey, as she recognizes him as von Ragastein. And he finds himeslf torn between the German Ambassador Terniloff, who favors peace, and the Kaiser, who reveals that he regards Terniloff as a tool, to be used to gull the English into thinking the Germans want peace.

Dominey's wife tries to kill him, then decides to spare his life, perhaps because she realizes he's not her husband. But the shadow of Roger Unthank still lies over them. The novel, of course, turns on resolution of both issues: the mystery of Roger Unthank's death (and ghost), and the problem of von Ragastein's spy mission, and whether he should support the Ambassador's peace party or his ruler's desire for war.

There's more going on of course, and a couple of twists along the way. It is precisely as preposterous as it sounds, and also quite enjoyable, if you can tolerate a fair amount of guff, and implausibility, and slightly old-fashioned writing. It strikes me as a book that deserved its bestsellerdom in its time, and that is still worth reading for that subset of us fascinated by older popular fiction, though hardly a book requiring a major revival.

It was filmed three times, by the way, first in 1921, again in 1935, and finally in 1942. The latter version doesn't seem well-regarded, partly I suspect because it moved the action to the runup to WWII. The 1935 version was apparently a faithful adaptation, and seems to have been a decent enough film.