A Not Quite Forgotten Book: A God and His Gifts, by Ivy Compton-Burnett 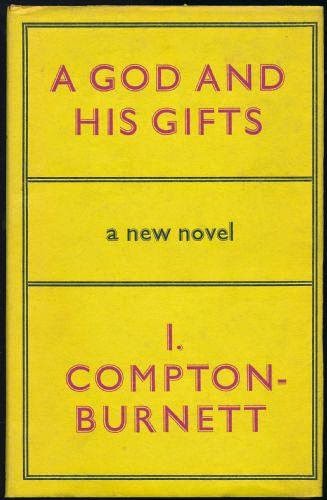 A Not Quite Forgotten Book: A God and His Gifts, by Ivy Compton-Burnett

I'm going to be out of town the rest of the week, so I'm dipping again into my backlist of reviews, for a look at an author who is hardly forgotten, though also not that well known. Indeed I would say that this very eccentric writer has perhaps established -- much as she had in life, really -- a permanent small niche as a minor but continuingly significant writer, never likely to be widely read but also not likely to be forgotten soon.

Ivy Compton-Burnett (1884-1969) was the first child of the second marriage of James Compton Burnett (Ivy's mother, by all acounts not a very nice woman, insisted on adding the hyphen), once famous homeopathic doctor. Ivy's life, at least at first, doesn't seem to have been very happy -- her mother was a bully, two of her sisters jointly committed suicide, as did a brother, another couple of brothers died young, one in the Great War. And none of her siblings had children. She herself never married, and lived from 1919 to 1951 with the famous writer on the decorative arts, Margaret Jourdain. Jourdain was far more famous during her lifetime, but by now some speculate that some of her success as a writer was due to Compton-Burnett's editing. It is often assumed that the two were lovers, but Compton-Burnett always denied this, and her biographer Hilary Spurling thinks not. Compton-Burnett's father amassed a considerable fortune, which Ivy had the management of after his death in 1916, giving her a comfortable living throughout her life.

Her first novel, Dolores, appeared in 1911, and is not well-regarded nor very characteristic. She later repudiated it. Her first mature novel was Pastors and Masters (1925). She continued to publish regularly until 1963 (one last novel was assembled from her notes and published in 1971). (Most of her novels, at least when published in the UK, were bylined "I. Compton-Burnett", but my US editions give her name as Ivy.) She never sold well, perhaps partly because her publisher, Victor Gollancz, was not enthusiastic. (Gollancz was an important figure in British publishing, but nothing I've read about him makes him seem like a particularly good person, nor one particularly interested in literature.) But almost from the first she attracted praise from fellow writers, such as Anthony Powell and her good friend Elizabeth Taylor. I will add that I have so far read only one of her novels, and cannot consider myself particularly well-placed to comment on her work as a whole. I do mean to do better ... but the to-be-read pile is so darn high!

A God and His Gifts (1962) was the last novel she published before her death. Based on what I know of her work, it seems fairly characteristic, and fairly well-regarded. It's the story of Hereward Egerton, a baronet's son who is a successful novelist, but perhaps just a shade too popular for critical approval. The first few chapters unfold rapidly, jumping years and decades at a time, as Hereward decides to marry a conventional neighbour (his mistress having rejected his suit), uses his money to save his parents' home, has three sons, and becomes close enough to his sister-in-law that his wife insists she leave. The final portion of the book (half or three quarters of it) happens after his sons have reached their majority. One son decides to marry, only to have Hereward seduce his fiancée. Hereward and his wife adopt the resulting child, without telling his son. The sister-in-law, now a widow, moves back to the neighborhood, and another of Hereward's sons falls in love with her daughter. I think you can guess what they will learn about her parentage! The whole thing is terribly melodramatic, but Compton-Burnett's telling of the story gives it quite a different tone.

I'm not sure what to say about it. Compton-Burnett's style is decidedly unusual. The story is told almost completely in dialogue, with very limited tags. The dialogue is arch, at the same time distant, almost emotionless in utterance despite what must be fury and revulsion behind much of it. I cannot say I believe in her characters -- they really seem artificial. Hereward perhaps excepted -- he is quite a monster, egotistical beyond bearing, self-indulgent, spoiled forever by his spinster sister. The story is indeed quite funny at times -- the deeply cynical views of the family butler are particularly to be noted -- but the humor is very cold. There is no question that she was an original writer -- I am not sure how ultimately worthwhile this novel is, however. But it does seem that I ought to try some more ... Manservant and Maidservant, from 1947, is often called her best.
Posted by Rich Horton at 6:26 PM