Old Bestsellers: A Diversity of Creatures, by Rudyard Kipling 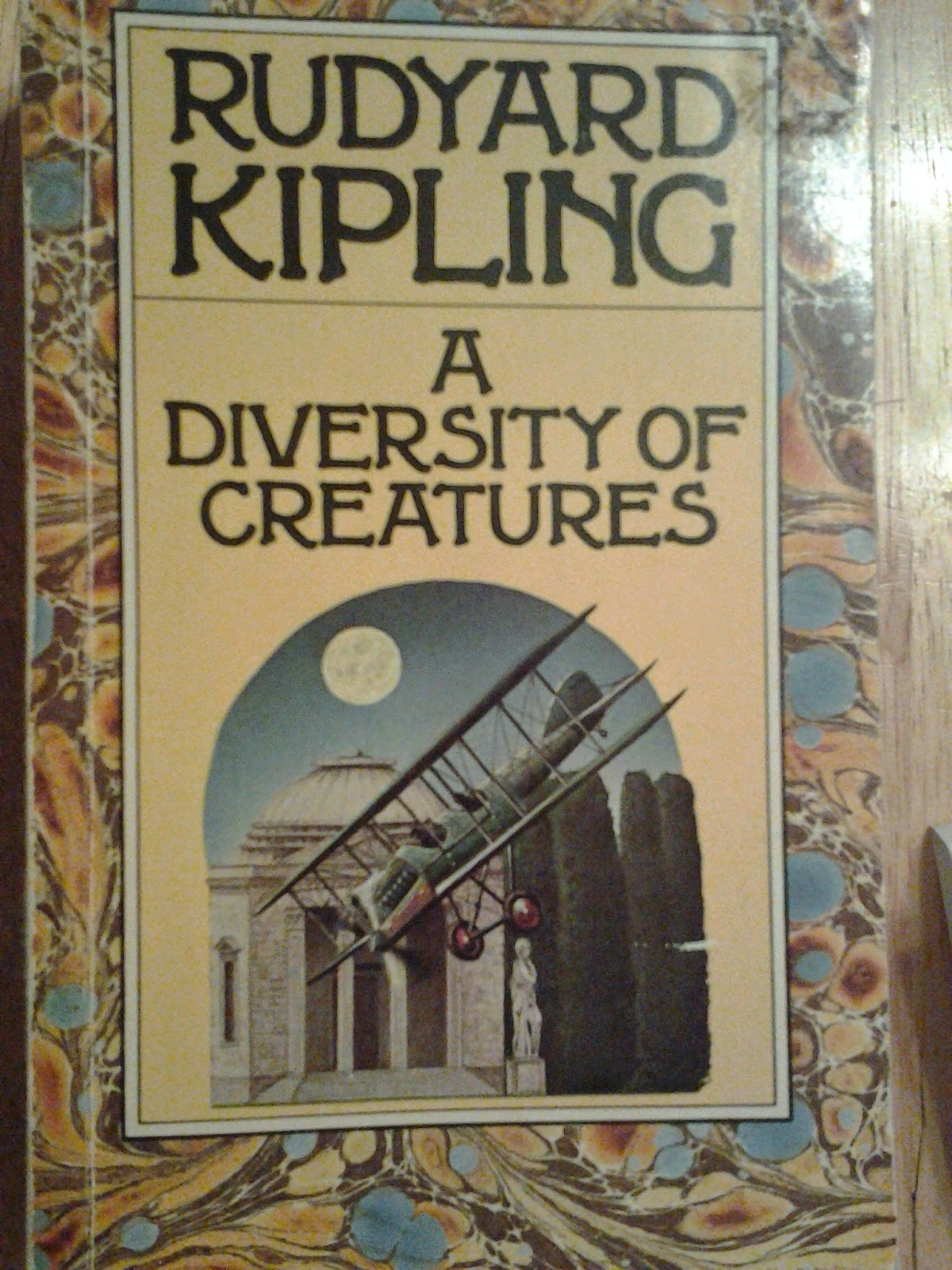 Old Bestsellers: A Diversity of Creatures, by Rudyard Kipling

I have no idea if this was a bestseller, but Rudyard Kipling was a very popular writer, so doubtless this sold nicely enough. A Diversity of Creatures was published in 1917, but most of the stories predate World War I, and it shows. The book resembles the just preceding adult collection, Actions and Reactions, more than it does the postwar collections such as Limits and Renewals. It does include one of his all-time great stories, "Mary Postgate", and one other very fine story, the odd SF piece "As Easy as A. B. C." Perhaps not surprisingly these close and open the collection. The other fairly famous story here is "The Village That Voted the Earth Was Flat".

I won't go into my usual detail about Kipling's biography: it's pretty familiar. Born in 1865, died in 1936. He had his foot in three countries: England, where his loyalties lay and where he lived more than half his life; India, where he was born and spent much of his youth and young manhood, and where he made his reputation and set most of his early stories; and the United States: he married an American woman, and they lived in Vermont for about four years. Kipling won the 1907 Nobel Prize for Literature (before much of his very best work appeared, which is not to say that the stories up until then, including his best-known novel, Kim (1901), weren't often outstanding). He is one of my favorite writers, and a great example of the fact that you can disagree profoundly with many of an author's views and still love the work. (A maxim many would do well to remember.)

The most obvious recurring theme in A Diversity of Creatures is revenge -- indeed, this is a central theme in much of Kipling, and not always in a good way. Quite often the revenge is by characters Kipling appears to approve of against hapless or awkward antagonists, and seems out of proportion to the original offense. In "The Village That Voted the Earth Was Flat", a group of people in an early motorcar are caught in a sort of speed trap, clearly a revenue grab by a local Baronet. They are newspaper people, as well as an M. P. and (in another car) a theatre man. They get together to subject the village in which they were mistreated to humiliation by such means as arranging for them to be hoodwinked into voting that the Earth is flat after a presentation by a fake member of the Flat Earth Society. That annoyed me enough on first reading to put me off the story entirely, but on rereading it this time I realized, for one thing, how funny the story can be; and, secondly, that the story takes an ambiguous view of the appropriateness of the "revenge". In many ways this is really about the sometimes dangerous power of the press. (It also introduces a character, singer Vidal Benzaguen, who shows up later in another revenge story, one of Kipling's very greatest, "Dayspring Mishandled", from Limits and Renewals. Kipling was wont to reuse characters, even minor ones, as we shall see again in this book.)

In "The Honours of War", a "Stalky as an adult" story, a rather silly young officer too much taken up with book-learning is the target. The story, from 1911, defends old-style traditional officers and military values -- and by the time the book was published surely it was already clear how horribly these were faring. (The following poem, "The Children", is a wrenching lament for young men dead in war -- whether it was written in response to WWI I don't know.) Another revenge story is "Friendly Brook", in which a drunk blackmails (more or less) a country couple who have adopted his child by threatening to assert his parental rights. He ends up drowning in the title brook, clearly a response of a "friendly" entity to the threat to the brook's local couple. "The Edge of the Evening" is a pre-war spy story. Laughton Zigler, the American entrepreneur who showed up previously in "The Captive" (Traffics and Discoveries), has now married and rents an English estate. The narrator character runs into him and comes up for a weekend, at which he hears a story of a German plane crashlanding on the estate, and Zigler and company (half by accident) killing the occupants and sending the plane off to harmlessly ditch in the Channel. In "The Vortex", a foolish representative of one of the Empire's Dominions, spouting rot about going it alone independent from England, etc., is given his comeuppance via a drive in a motorcar, some bees, and an accident. "In the Presence" tells two stories of Indian soldiers: in one, a pair of Sikh brothers take vengeance on the locals who take advantage of their absence in the British Army, in the other, a group of Goorkhas faithfully mourn the death of the King.

There is also a Pyecroft story, "The Horse Marines", about mishaps with a motorcar stumbling into a military exercise. "'My Son's Wife'" is one of those Kipling stories where a city boy discovers the value of country life and country people. In this case a foolish young radical bohemian sort ("He had suffered from the disease of the century", the story opens), depressed after his free-loving girlfriend dumps him, inherits his aunt's estate. At first he plans to sell it, but the attractions of hard work, hunting, and a local girl all work to turn him into a man of the land -- and a Tory too, no doubt! "'Swept and Garnished'" is one of the two war stories, a ghost story in which a German woman is visited by the shades of the children of a French village overrun by the German army. It's a pretty powerful piece. "Regulus" is another Stalky story, though he's not a main character. It's set in school, and concerns a prim and virtuous young man getting in some trouble and being compared to the Roman hero Regulus.

"In the Same Boat" is a tale of drug addiction. Two young people are treated for addiction to sleeping pills by the same doctor, and they support each other on train trips as they try to go cold turkey. Both have terrible dreams that drove them to their addictions. The source of the dreams are eventually revealed, and give the story a slightly supernatural edge. The two seem well suited to each other, but one point of the story is that even though they become friendly they can never love each other -- perhaps the knowledge of each other's weakness is too much for them. "The Dog Hervey" is about an old maid who gets a rather mangy dog as a pet, and how this unlovely beast finally leads her to romance.

Now to the cream of the crop. "As Easy as A.B.C." is a sequel to "With the Night Mail". It is set in 2065. The world by this time has become a mostly libertarian paradise, with a declining population and a horror of invasion of privacy. One form of invasion of privacy, in this formulation, is democracy, with its imposure of majority will. Paradoxically (or not), the generally libertarian nature of this society is maintained by the Draconian rule of "The A.B.C., that semi-elected, semi-nominated, body of a few score persons", as the introductory paragraph has it. In this story some members of the A.B.C. are traveling to Chicago, where it seems a few idlers and no-accounts have been assembling and trying to force votes on various issues. The other locals, horrified, call in the A.B.C. demanding that they take over -- if they don't, they say, people might get killed. And so the A.B.C., rather drastically it seemed to me, takes things in hand -- though with magic tech that supposedly won't actually really hurt anyone. Politics aside (the views put forth are, I think, purposely exaggerated for effect), I really liked the story. It seems very fresh, very science-fictional and well thought out, for all that it dates to 1912. It is probably my favorite of Kipling's "Science Fiction" stories.

The title character of "Mary Postgate" is a spinster hired to be companion to a well-off woman, Miss Fowler. Miss Fowler's nephew Wynn is orphaned, and she and Mary Postgate more or less raise him, until he joins the nascent Flying Corps at the outbreak of war. Soon he dies in a training accident. Through all this we gather something of Mary Postgate's relationship to him: clearly she dotes on the boy while he treats her with casual disrespect that one supposes includes a reluctant admixture of affection. Mary Postgate suffers in silence through the funeral, and the cleaning up of his effects. The two women decide to burn some of Wynn's belongings, and as Mary is working on his there is another accident -- a building collapses, and a local child is killed. At about the same time an airplane crashes near the incinerator where Mary Postgate is burying Wynn's effects. Mary immediately (and almost certainly erroneously) decides that the airplane had dropped a bomb, causing the building collapse. When she finds the downed pilot, she refuses him any help (though he speaks in French, albeit possibly German-accented French), instead guarding him until he dies -- an event she reacts to in a stunning scene in which she seems perhaps to come to orgasm as the man dies.

It's an odd odd story, and Mary Postgate is one of Kipling's stranger characters. You might think that the story, written in about 1915, in the midst of the War, should be read straight -- that Mary is simply doing her bit for the War effort, killing her German, as it were, while mourning her lost surrogate son, who died as a result of the War. But everywhere this is undermined. Mary's actions are hardly heroic, and her orgasmic reaction to his death is distasteful. The German pilot isn't even necessarily German -- he could be French, an ally. Mary assumes he dropped a bomb on the village and killed a child -- but that does not seem likely. Mary's beloved Wynn does not die in action but in a training accident. To me the story seems rather to be concerned with the tragic waste of war, with the danger of excessive vengefulness, and with one particular character: the spinster Mary Postgate.
Posted by Rich Horton at 7:30 PM