A Not Quite Forgotten Book: Palladian, by Elizabeth Taylor 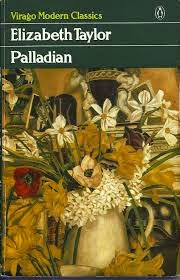 One of the great mid-20th century English writers was Elizabeth Taylor (needless to say, not the actress). Taylor, daughter of an insurance inspector, was born in 1912 and died in 1975. She married John Taylor, who owned a candy company, in 1936. Her friend the novelist Elizabeth Jane Howard declined to write a biography of Taylor due to "lack of incident" in her life, though as Taylor was notably a very private person, it may be that Howard was simply deferring to her friend's presumed wishes.

I discovered Taylor because Howard's husband, Kingsley Amis, one of my favorite writers, called her "one of the best English novelists born this century". Taylor can be placed with others of the great run of English women writers of quiet but sharp social comedy of roughly the middle of the 20th Century: the obvious comparisons are Barbara Pym, Elizabeth Bowen, perhaps Anita Brookner or Muriel Spark, even. (Even perhaps another friend of Taylor's, the somewhat older and decidedly odder Ivy Compton-Burnett.) I've read a few of her novels: I like in particular Mrs Palfrey at the Claremont, one of the great novels of old age. (Amis has one too: Ending Up; and so does Spark: Memento Mori.)

This book certainly wasn't a "bestseller" -- none of Taylor's novels were. She might have been in danger of becoming forgotten at some point, but her champions such as Howard, Amis, and Anne Tyler have kept her novels in people's minds. Many of her books were reprinted in trade paper by Virago Press, a feminist imprint, in the 1980s. My copy of the book at hand, Palladian, is the Virago reprint. Taylor's work got some more notice in the 2000s with the appearance of a couple of movies based on her best-known novels, Mrs Palfrey at the Claremont (starring Joan Plowright) in 2005, and Angel (starring Romola Garai) in 2007.

Palladian is her second novel, from 1946. The nominal protagonist is Cassandra Dashwood, who becomes governess to Sophy, daughter of a rather ineffectual widower, Marion Vanbrugh, who lives in a decayed manor house with his drunk cousin Tom, Tom's pregnant sister Margaret, a couple of not very respectful servants, and Tom and Margaret's somewhat dotty mother. Cassandra is a romantical young woman who determines in advance to fall in love with Marion. And so she does. But that is a small part of the story. More important, perhaps, is Tom's tawdry relationship with the local publican's wife, and Tom's secret past involving Marion's dead wife. There are also telling tidbits from the POV of the two servants. Margaret's rather bossy and excessively bracing nature. Sophy is depicted as a pretty normal girl of her age, not at all a prodigy, desperate about her failure to be the beauty her mother was.

The novel turns on a shocking event with about 40 pages to go. I admit I put the book down for a day or so at that point -- it seemed unearned, unfair. But -- though I am still unsure that that plot development works -- Taylor still brings home the novel quite effectively. It's by no means her best novel, but it's fine work. Delicately funny, acute, honest about its characters' failings but still fair to them. Taylor was a fan of Jane Austen, which is fairly clear in all her work, but perhaps never more so than here, as indicated by her protagonist's name, by the reference to the Greer Garson*/Laurence Olivier vehicle Pride and Prejudice, which is shown at the local theater, and by a couple further overt references to Austen.

(*As it happens I just the other night watched another Greer Garson film, Random Harvest, based on the novel of the same title by James Hilton, which I covered in this space a couple of months ago.)
Posted by Rich Horton at 6:32 PM