Old Bestsellers: The Bondage of Ballinger, by Roswell Field 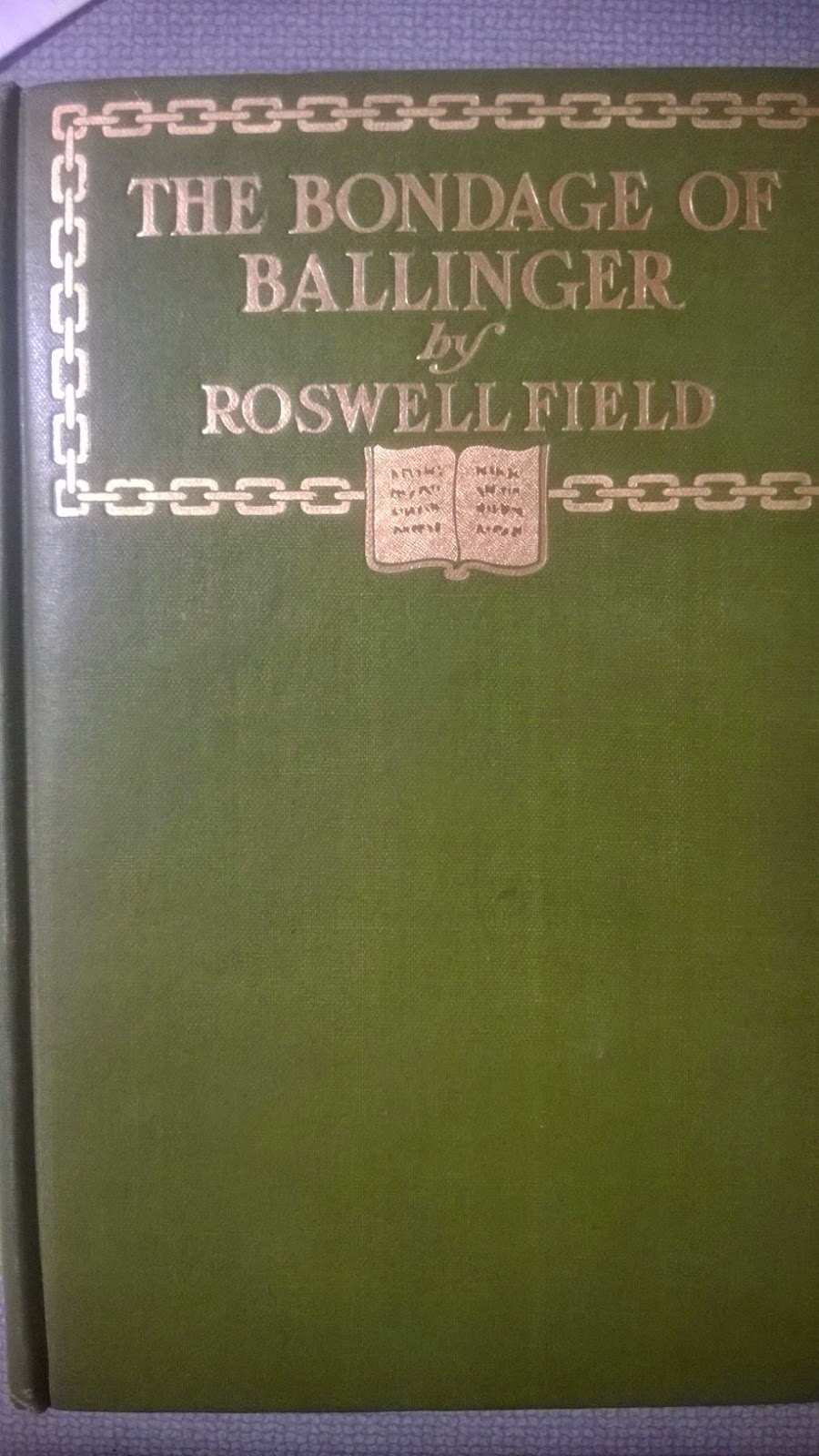 The Bondage of Ballinger, by Roswell Field

Well, I don't think this book was a bestseller. And the writer is, as far as I can tell, quite forgotten, and perhaps only ever known for having a notable father and a quite famous writer for a brother. What it is, is a book for a certain class of people ... many of whom may read this blog, or, at least, are part of what I perceive my desired audience for this blog to be. And those people are "bookmen": book collectors, indeed, as portrayed in this novel, obsessive book collectors to the point of unhealthiness.

Roswell Field's father, also named Roswell Field, was a St. Louis lawyer, and he is remembered for one earth-shaking case, the Dred Scott case: he was Scott's advocate. (So, like Clarence Darrow, he is remembered for a case he lost.) He had two sons with literary careers. By far the more famous is Eugene Field (1850-1895), still very well remembered for light verse, often for children, such as "The Duel" (aka "The Gingham Dog and the Calico Cat") and "Wynken, Blynken, and Nod"; as well as for one short story, "Daniel and the Devil", an inspiration for Stephen Vincent Benet's much more famous "The Devil and Daniel Webster". The Eugene Field House is a minor attraction in St. Louis (where I live), though Eugene, as with his brother, later moved to Chicago. The younger brother was Roswell Field (1851-1919), who, like Eugene, attended the University of Missouri and ended up moving to Chicago.

Roswell seems to have been a quite prolific writer of books that seem, at glance, to be somewhat gloopily sentimental. Certainly "gloopily sentimental" applies to The Bondage of Ballinger. This book was published in 1903 by Fleming H. Revell, a Chicago-based firm that began as a publisher of Christian tracts. My edition, which I found at an antique mall in Springfield, IL, seems quite possibly to be a first, and it's in very fine condition, though there is no dust jacket. 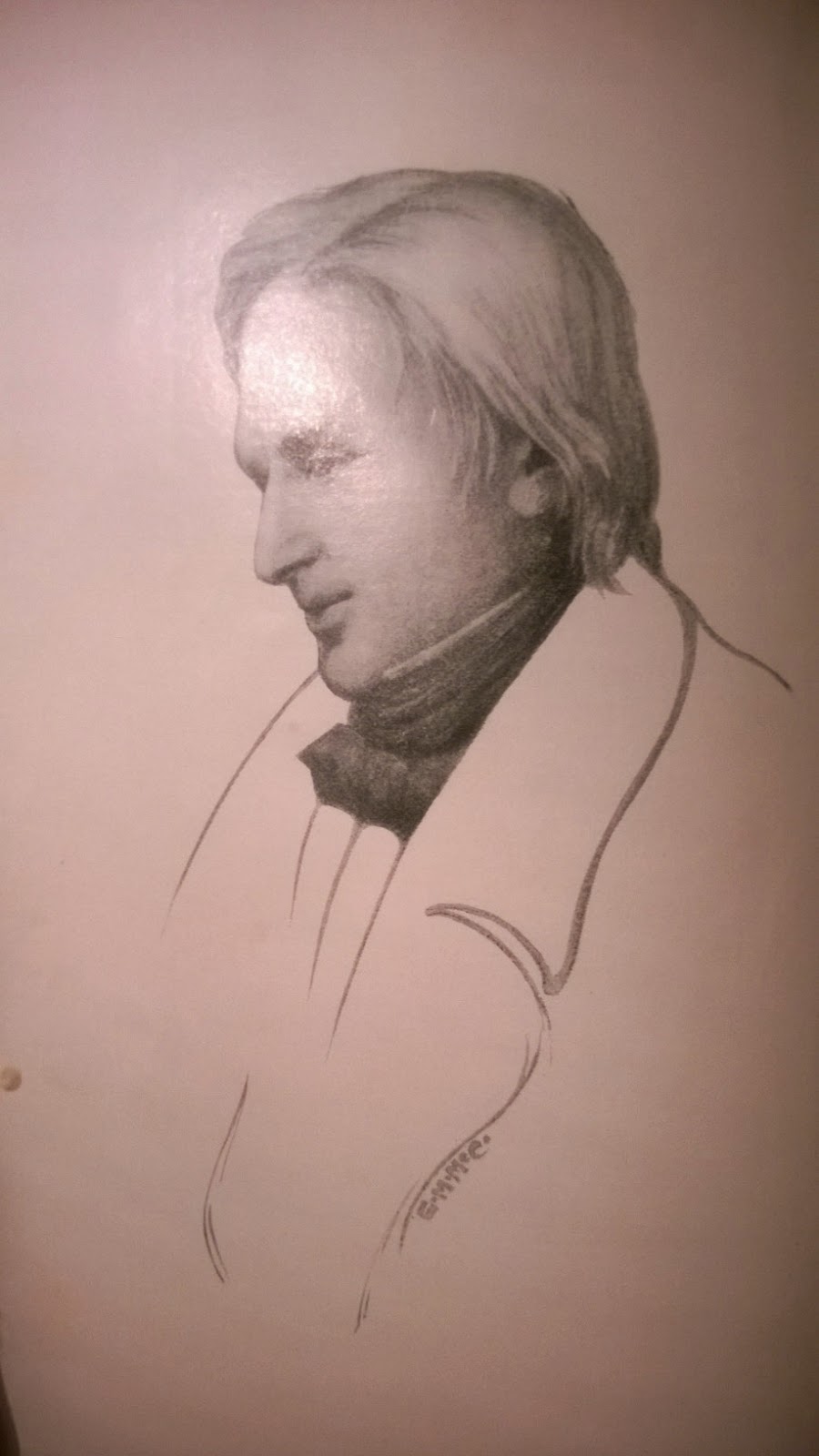 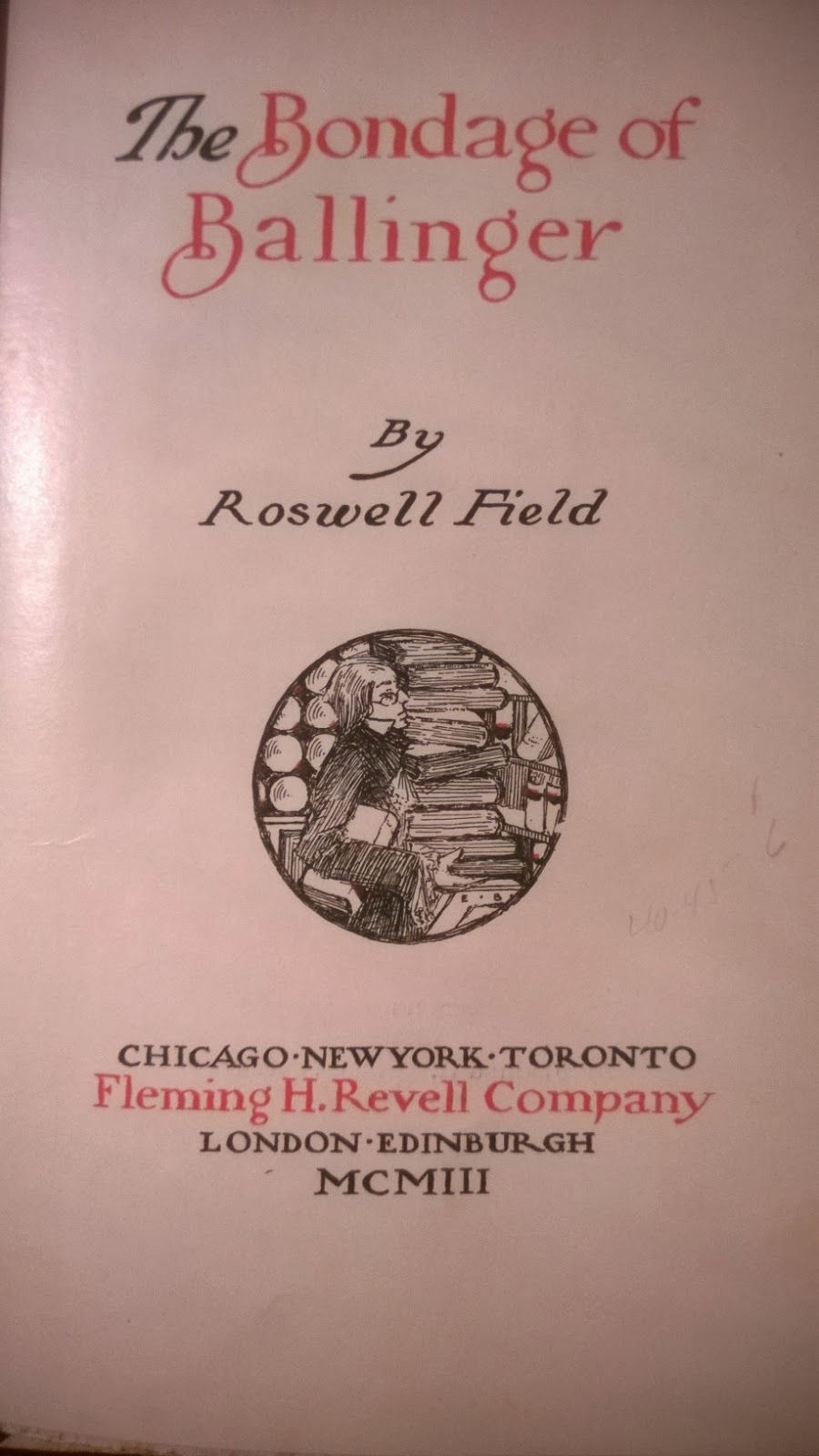 The book opens with a longish history of the Ballinger family, beginning with Giles, a "staunch Puritan" who fought with Cromwell, and fled to Massachusetts after the Restoration. His descendants were for some time clergymen, and then schoolteachers, and then comes Thomas, sometime in the first half of the 19th century. Thomas is pleasant and sweet and lazy and loves nothing but books. He fails at every trade he tries except for printer. He falls in love from childhood with a Quaker girl, Hannah, and marries her despite her father's misgivings, after which they enter on a peripatetic life, Thomas finding jobs for a year or two at a time as a printer, but spending most of his money on books, especially rare books. He treasures especially books he has had personally autographed by the likes of Emerson, Hawthorne, and Thoreau. He and Hannah make it all the way to California, before wandering back to Chicago, and settling permanently in a cottage on the lakeshore (apparently on the North Side).

All this time Thomas is just barely making enough to keep he and his wife provided for, but then he is enticed to quit his job and open a rare book store. This actually might have worked out well, except that he can hardly bear to sell any of his books, so he ends up mostly just buying more books and refusing to sell his treasures even when customers beg him. Clearly bankruptcy is the only future for him ... but, somewhere along the way, a chance collision with a very young girl, Helen Bascom, the only daughter of a very wealthy grocer, leads to a sort of redemption, as Helen become entranced with Thomas and his books, and Thomas, almost by accident, gives her an excellent education in literature, which proves vital when disaster looms for the Ballinger couple.

The portrayal of Thomas Ballinger and his wife Hannah is sweet but almost cruel. Field calls them "children" throughout, though the novel follows them from very young childhood to somewhere in their 60s. Hannah's sin is weakness: an inability to stand up to Thomas's refusal to properly provide for her. Thomas, though a very sweet and nice man, an enemy to no one, simply will not take any responsibility to provide for his wife. And Field makes this very clear. That their ultimate fate is happy is simply due to luck.

The book is really not very good. As I said before, it's gloopy. It is also often quite boring. The sweetness cloys, and Thomas unworldly attitude towards finance seems exaggerated to the point of caricature ... well, really, Thomas' entire character is a caricature. The resolution, with Helen prevailing on her father to secretly provide for Thomas and Hannah, is pleasant but not quite plausible. In reality, it's a minor and deservedly forgotten book.

But I'm glad I found it, for two reasons: one, the portrayal, even if exaggerated, of a breed to which I belong: book collector; and, two: the serendipitous discovery of connections to St. Louis natives of some note in Roswell Field the elder and in Eugene Field.
Posted by Rich Horton at 7:49 PM