Old Bestsellers: When Knighthood Was in Flower, by "Edwin Caskoden" (Charles Major) 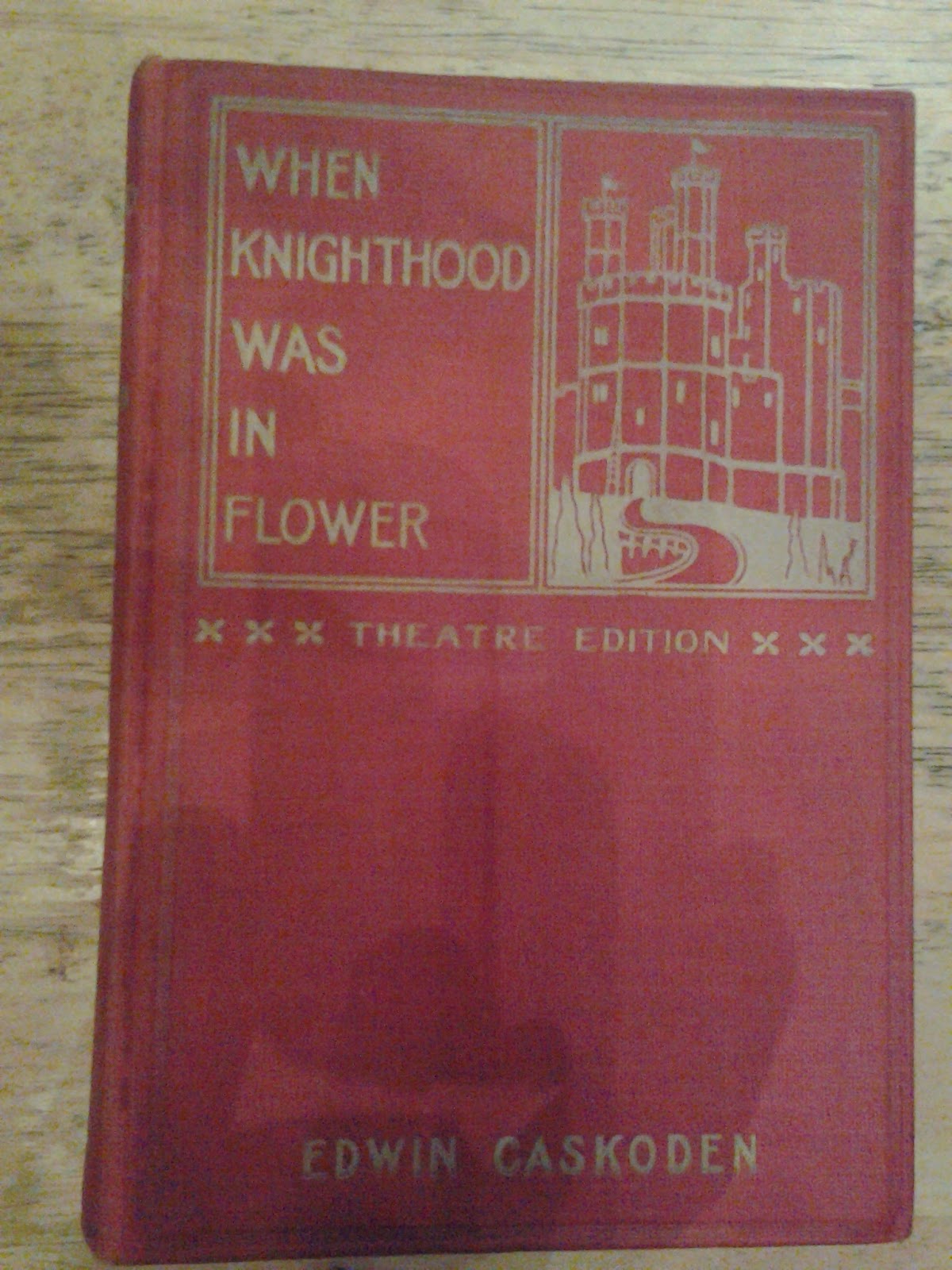 When Knighthood Was in Flower, by "Edwin Caskoden" (Charles Major)

This is an interesting case, I think. For reasons not always having to do with the book: I'll be blathering about the movies made from it, the career of one of the actresses in the movies, and publishing history ...

When Knighthood Was in Flower was a true bestseller. It was published in 1898, and it was the second bestselling novel of 1899, and the fifth bestselling novel of 1900. Yet it seems all but entirely forgotten today, as does its author. (It was at least modestly well-remembered into the 1950s.)

Charles Major was an Indiana lawyer (and one-term state legislator), born in 1856 in Indianapolis, a graduate of the University of Michigan, and resident in Shelbyville (only 30 or so miles SE of Indianapolis) for most of his adult life. He died quite young, in 1913. When Knighthood Was in Flower was his first novel. He closed his law practice after its success and continued to write. He had one more major bestseller, Dorothy Vernon of Haddon Hall (1902), set in Elizabethan times (and later filmed starring Mary Pickford). He wrote several more historical novels, as well as a few children's adventure stories set in Indiana.

Major published When Knighthood Was in Flower under the pseudonym "Edwin Caskoden", partly perhaps to avoid interfering with his law practice, but also as part of the novel's conceit: the narrator is named Edwin Caskoden, and the story is presented as being an edited version of Edwin Caskoden's memoir, done by his distant descendant of the same name. Not surprisingly for such a successful book, it became a successful play and movie. The first movie version was as early as 1908, produced by D. W. Griffith, and retitled When Knights Were Bold. (No copies survive.) The next version was made in 1922, and starred William Randolph Hearst's mistress Marion Davies. Finally, Disney made a live-action movie in 1953, renaming it (in the US) The Sword and the Rose.

(That version starred Glynis Johns, whom I remember (not from seeing the play, just from listening to the soundtrack) as the original Desiree Arnfeldt in Sondheim's A Little Night Music, and thus the original singer of "Send in the Clowns". Johns also played Mrs. Banks in Mary Poppins. She was the daughter of actor Mervyn Johns, and more importantly, she shares a birthday, October 5, with no other than ... me!. She is still alive, aged 91.) 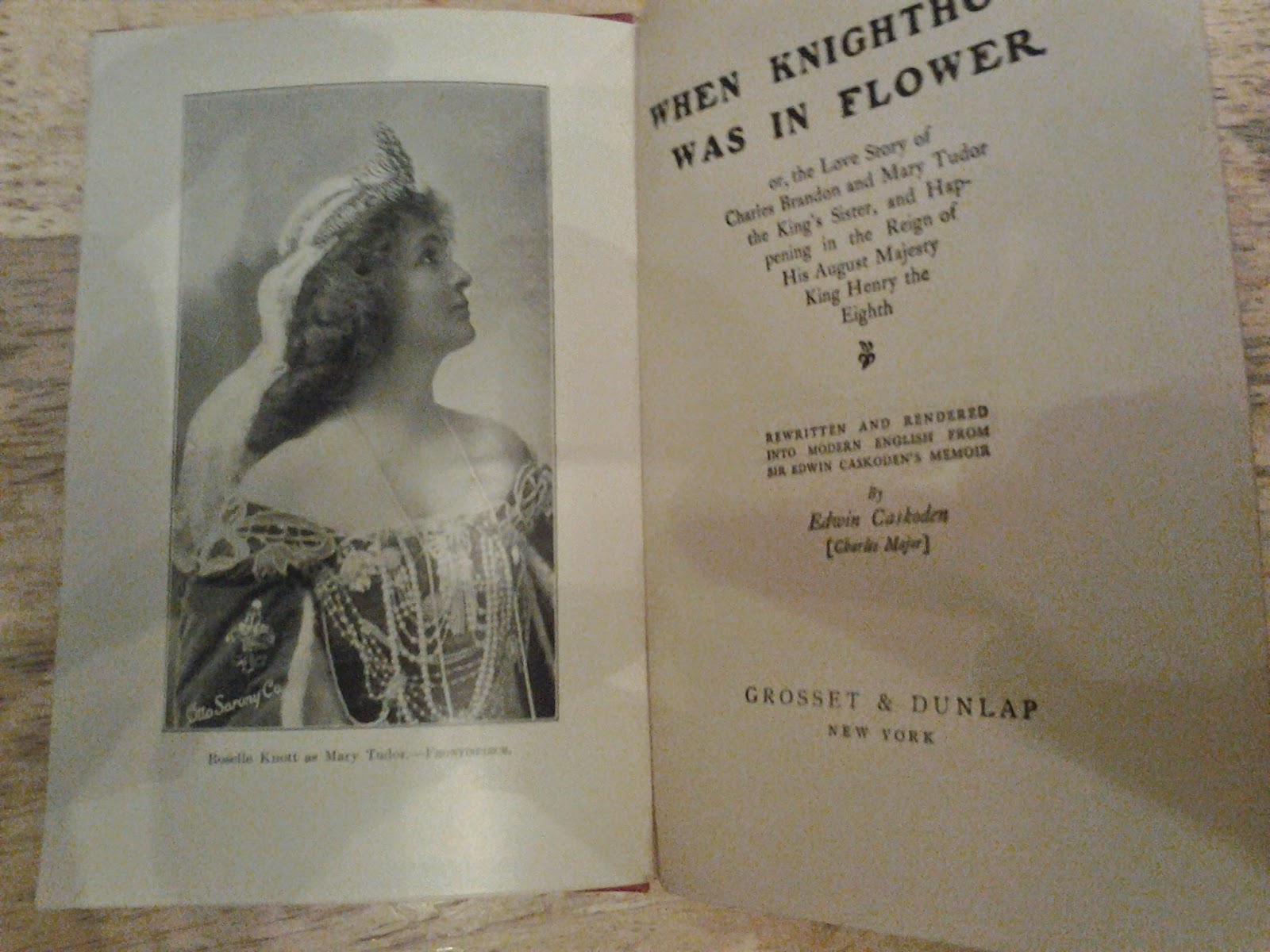 My edition of the book is a Grossett and Dunlap reprint, called the "Theatre Edition", presumably because it is illustrated with still photos from a production of the play. (That seems to have been common at that time. The picture I have so clumsily reproduced above (my son not being available to do the photography) is of Roselle Knott playing Mary Tudor, though the role was actually originated by Shakespearean actress Julia Marlow.) This edition is undated, but may have appeared in 1907, as it is inscribed "Mr. Virgil S. Kenninger, from Mamma, Christmas 1907". At least by the time this edition appeared, Major was acknowledging his authorship: the title page says "Rewritten and rendered into modern English from Sir Edwin Caskoden's memoir by Edwin Caskoden (Charles Major)". The original publisher was Bowen-Merrill, the predecessor to the Bobbs Merrill publishing firm. Bobbs-Merrill was best known for publishing The Joy of Cooking, as well as L. Frank Baum. They were based in Indianapolis, hence the connection to Major: a salesman for the firm tried to sell him some law books, and instead he brought back a copy of the manuscript.

The book is held to have been at the forefront of a sudden fashion for historical romances. I found it quite enjoyable, but it does not have much of a remaining reputation. I found the following in a 1955 article by a Professor of History at Indiana University, Howard J. Baetxhold:

"Charles Major's works will be long remembered in American literary history. To be thoroughly honest and objective, however, we must admit that, dear as they are to the hearts of Hoosiers, their place has not been determined by intrinsic literary merit. They have the characteristics of the historical novels of the time -- overly rhetorical and bombastic language; heroes possessing impossible skill, bravery, and foresight; plots determined largely by coincidence. Modern critics do not always deal kindly with Major. One contemporary scholar writes: "Although his importance may be said to be entirely in the historical field, Major made no real contribution to the development of the historical novel created by Scott and Americanized by Cooper. He had their faults but seldom possessed their powers." But the books do tell an exciting story, and Major certainly holds his own in the genre with his contemporaries: writers like Maurice Thompson, George Barr McCutcheon, and the early Tarkington."

Baetxhold was quite wrong in his assertion that Major's works will be long remembered -- they are now nearly forgotten. But I think he, and the scholar he quotes, are also off the mark in their judgement of his work. Major, at least in this first novel, is not terribly bombastic in his language, and while the primary hero does possess unusual skill, and lots of bravery, and perhaps overemphasized virtue, the plot is not really driven by coincidence at all, and in fact much goes wrong for the characters. But most of all, the chief virtue of this book is one seemingly completely missed by those commentators: the narrative voice of "Edwin Caskoden", which is a purposely self-deprecating mixture of some pomposity, some family pride, and lots of (probably deserved) modesty about his abilities in certain spheres. Moreover, he is witty throughout, and plausibly and funnily observant about most of the characters around him (the perhaps too perfect hero, Charles Brandon, excepted). It's really not bad stuff at all, though it's not earthshakingly great either.

The novel's title comes from a couplet by Leigh Hunt: "There Bred a Knight, when Knighthood was in flow'r/Who charmed alike the tilt-yard and the bow'r". The novel has a long subtitle: The Love Story of Charles Brandon and Mary Tudor, the King's Sister, and Happening in the Reign of His August Majesty, King Henry VIII. It opens with a preface detailing the supposed origin of the story: one Edwin Caskoden gives a short history of his often illustrious family, especially noting how one of his ancestors made a fortune by wisely ignoring the then King's cuckolding of him, instead gaining favor and selling him lots of jewelry (he was a goldsmith). The goldsmith's grandson is Sir Edwin Caskoden, Master of the Dance for King Henry VIII, and the story is supposed to be a rewritten extract from his memoirs.

Caskoden tells of Charles Brandon, a commoner who had made something of a name for himself by fighting in the wars in Europe, and who after returning home, fought a duel with a man famous for having killed numerous men in other duels, including Brandon's father and brother. It turns out the other man was a cheater, wearing mail under his clothes, and Brandon disarms and blinds him. His fame leads to an invitation to King Henry's court. As Caskoden notes, the King's 19 year old sister, Mary Tudor, is the leading beauty of the court, and many men had fallen for her only to be rejected (Caskoden included, though on the rebound he started courting Mary's best friend, in the end successfully). Naturally he assumes that Brandon will fall for her too, which could be disastrous as he is a commoner. The two men are soon close friends, and by convincingly feigning complete indifference Brandon manages to attract Mary's attention.

Before long the two are completely in love, to Henry's anger, as he wishes to marry her off to the aging King Louis of France. A further complication comes from a former suitor of Mary's, the dastardly Duke of Buckingham, who attempts to disgrace Mary when she makes a visit to a fortuneteller who happens also to run a house of ill repute. When Brandon rescues the girls, he kills two of Buckingham's hired men, and Buckingham has him thrown into prison.

Brandon is finally released and plans to travel to New Spain (i.e, America) because he knows that the King will have him executed for daring to mess with his sister. Before long Mary plans to come along with him, dressed as a man, but that plan fails because she it too beautiful to pass herself as a male. Brandon ends up in the Tower, and Mary can only save him by finally promising to marry the French King.

The rest of the novel is fairly true to the historical record ... the King of France dies soon after the marriage (Caskoden suggest, and in fact contemporary wags thought so as well, that Mary (presumably on purpose) wore the old man out), and Brandon goes to France and secretly marries her, despite the odious attentions of the Dauphin, the new King (a married man it should be noted). Henry VIII makes the best of things by making Brandon 1st Duke of Suffolk.

Major claimed to have deviated from the historical record only in small ways (Brandon's father is supposed to have been killed by Richard III, not in a duel; and Brandon was given his titles before marrying Mary Tudor); but there are other departures. Most obviously, the novel's Brandon is portrayed as quite young and unimportant, but in fact he was 31 in 1515 (when the action takes place), and had already been married twice (scandalously, Wikipedia says) and widowed twice, and was engaged to his 8 year old ward, Elizabeth Grey. He married another ward (this one 13) after Mary Tudor's death. Clearly not the paragon portrayed in the novel -- though he was in fact a notable soldier, and a very influential man in Henry's court. He and Mary were the grandparents of the tragic near-Queen Lady Jane Grey.
Posted by Rich Horton at 7:03 PM