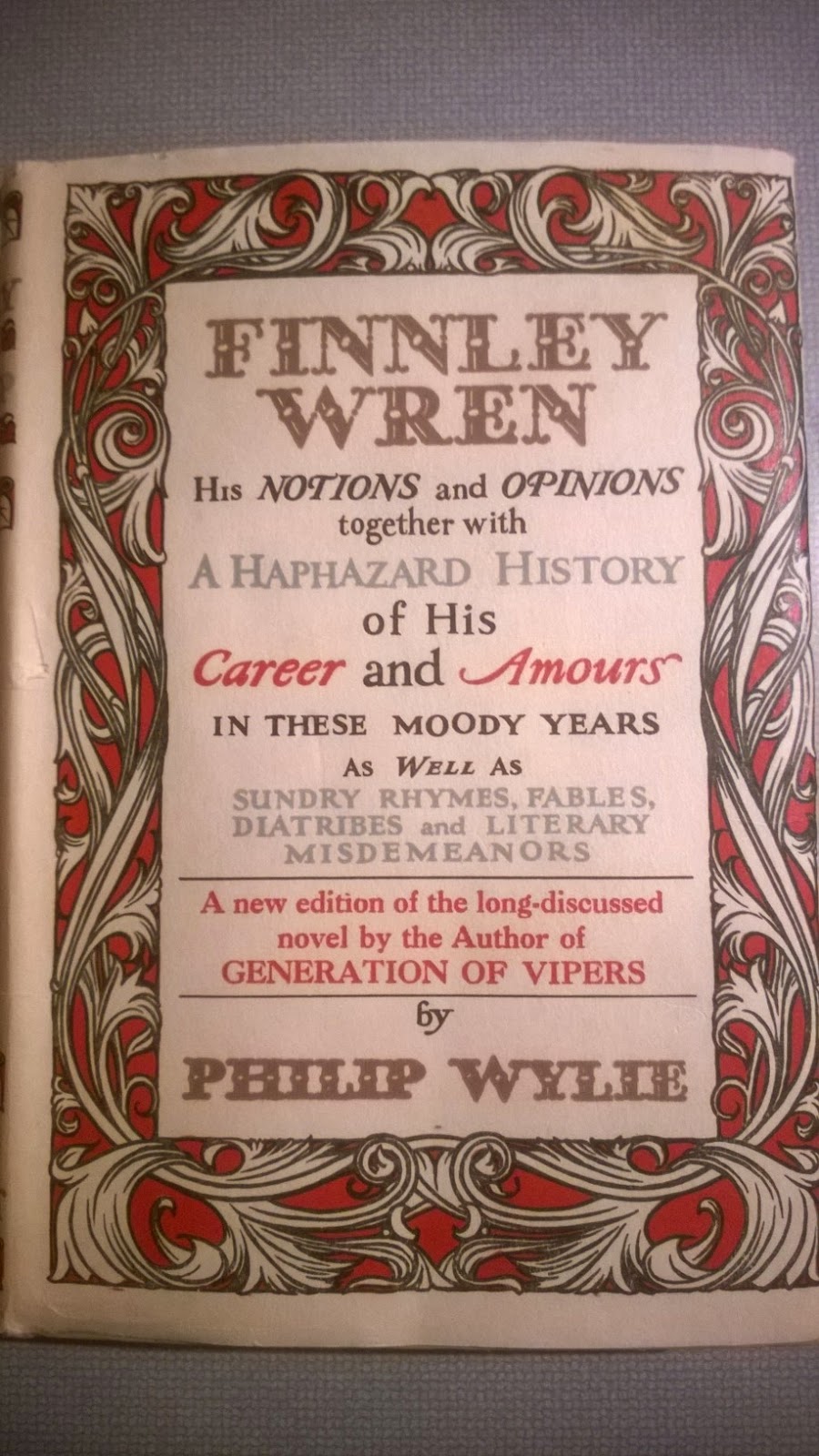 Philip Wylie was once a very famous writer, both for his polemics and his fiction. He was born in 1902, died in 1971. Much of his work was SF, though he did not work within the confines of the genre. His most famous novel may be The Disappearance (1951), in which the world splits into two timelines, one with all the men, the other with all the women. His two collaborations with Edwin Balmer, When Worlds Collide (1933) and After Worlds Collide (1934), concern a rogue planet colliding with Earth, and an escape to the planet's moon. They were very popular, and a movie was made in 1951, produced by George Pal (and departing quite a lot from the plot of the novels). Wylie's non-fiction screed Generation of Vipers (1942) also attracted a lot of attention. Novels like Gladiator (said to be an inspiration for Superman) and The Savage Gentleman (said to be an inspiration for Doc Savage) also were noticed. He also wrote a great many stories about deep sea fishing, featuring the characters Crunch and Des: these appeared regularly in the Saturday Evening Post, and became a TV series in the 1950s. Many of his later novels concerned nuclear war, and close to the end of his life he wrote the screenplay for a special episode of the TV series The Name of the Game, set in LA in 2017: this episode was directed by a very young Steven Spielberg.

Wren's family members gained a bit of notoriety, in one case quite tragically: his niece Janice Wylie was murdered with her roommate in 1963 in a famous case called the "Career Girls Murder". A man of limited intelligence was originally charged with the murders and was coerced into confessing ... he was eventually exonerated and the actual murderer was caught, but the case was one of those that led to the Miranda rules. Janice Wylie's father Max was an advertising man and a novelist. Philip Wylie's daughter Karen Wylie Pryor wrote an influential book on breastfeeding, and was married at one time to Charles Lindbergh's son Jon.

Though his reputation was well-established in the literary world, a quick look at the above list shows an abiding interest in genre fiction, including outrightly pulpy stuff. (He also wrote some mysteries.) But he did also write straightforward literary fiction, and one perhaps his best-known effort in that vein is Finnley Wren, from 1934. I say best known, but I have to confess that while I was very familiar with The Disappearance, Generation of Vipers, and When Worlds Collide, and had at least heard of Gladiator, I had no idea Finnley Wren existed until Gregory Feeley pointed me in its direction a couple of months ago. Based on that, I think it qualifies this days as a largely forgotten book.

Finnley Wren appeared during a period of tremendous productivity for Wylie: he published 10 novels between 1928 and 1934, three in that last year alone. It has a long subtitle that describes the novel reasonably well: "His Notions and Opinions together with a Haphazard History of His Career and Amours in These Moody Years as well as Sundry Rhymes, Fables, Diatribes and Literary Misdemeanors". My edition is the Thirteenth Printing, from Rinehart and Company (owned by Mary Roberts Rinehart's sons). It is marked by some minor typographical experiments ... not sure how they are reproduced in newer editions.

It opens in a bar in New York, on a Friday afternoon, in perhaps 1932 or 1933. The narrator, Philip Wylie, at loose ends because his wife is traveling to the Caribbean, meets a man named Finnley Wren who starts to tell him the story of his life. Much of the early history of his life is given in a few long conversations over the next couple of hours -- Finnley was born in South Dakota in 1900, went to elementary school there (described cynically), had a brother and sister named Tom and Vi. (I thought of T. S. Eliot and his wife, called Tom and Viv: I am sure Wylie was not thinking of them.) Sometime in Wren's teens they moved to New Jersey. At a dance just before going to college Finnley is spurned by his longtime sweetheart, and ends up sleeping with another girl, who then accuses him of getting her pregnant, even though the baby shows up far too soon to be his. Finnley is ostracized, and ends up playing piano on a cruise ship heading to Europe, where he is seduced by the wife of an advertising man and then falls in love with her daughter. After some travail, they get married and Finnley takes a job working for his father-in-law ... and at the time of the story, he is a fairly prominent advertising man, though no longer married to his boss's daughter.

All this seems quite simple but there is much more going on ... vicious description of Finnley's rather awful father ... revelation of Finnley's early loss of faith and his cynicism about education and women ... portraits of his brother, sister, and mother, all of whom he loves but all of whom seem weak ... etc. etc.

The novel continues as Finnley takes Wylie to a strange party on Long Island, where Wylie seems ready to sleep with a beautiful married woman but instead inveigles from her the story of Finnley's horrible second wife, who decided to become a single mother despite having no intention of raising the child, and who ruins another man's life in the process. We learn what happened to Finnley's first wife (a rather gothic tale) and the also rather gothic tale of his second wife's pregnancy. Wylie eventually sleeps with a different woman, a nice but apparently stupid chorus girl ... but she has a secret too. There are brief cynical depictions of the other people at the party, an apparently typical messed up bunch of affluent New Yorkers and suburbanites. We see a couple of Finnley Wren's efforts at fiction, which he calls "Epistles", and which are fable-like SF stories actually.

It's a curious construct, this novel. Much of it is indeed given to Finnley Wren's Amours, and much to Fables and Diatribes (not just by Finnley), and there is plenty of often cynical philosophical musing. It is often funny, but sometimes quite tragic. It is certainly polemical. And in the end, one realizes somewhat unexpectedly that Finnley Wren is actually a somewhat ordinary man -- after all, he's in advertising. Perhaps that's the point -- the extraordinary ordinary life. Or perhaps he's a tragic case ... trapped in a career unworthy of his talents. Or perhaps it's just a story of its time.