Old Bestsellers: Portrait of Jennie (and One More Spring), by Robert Nathan 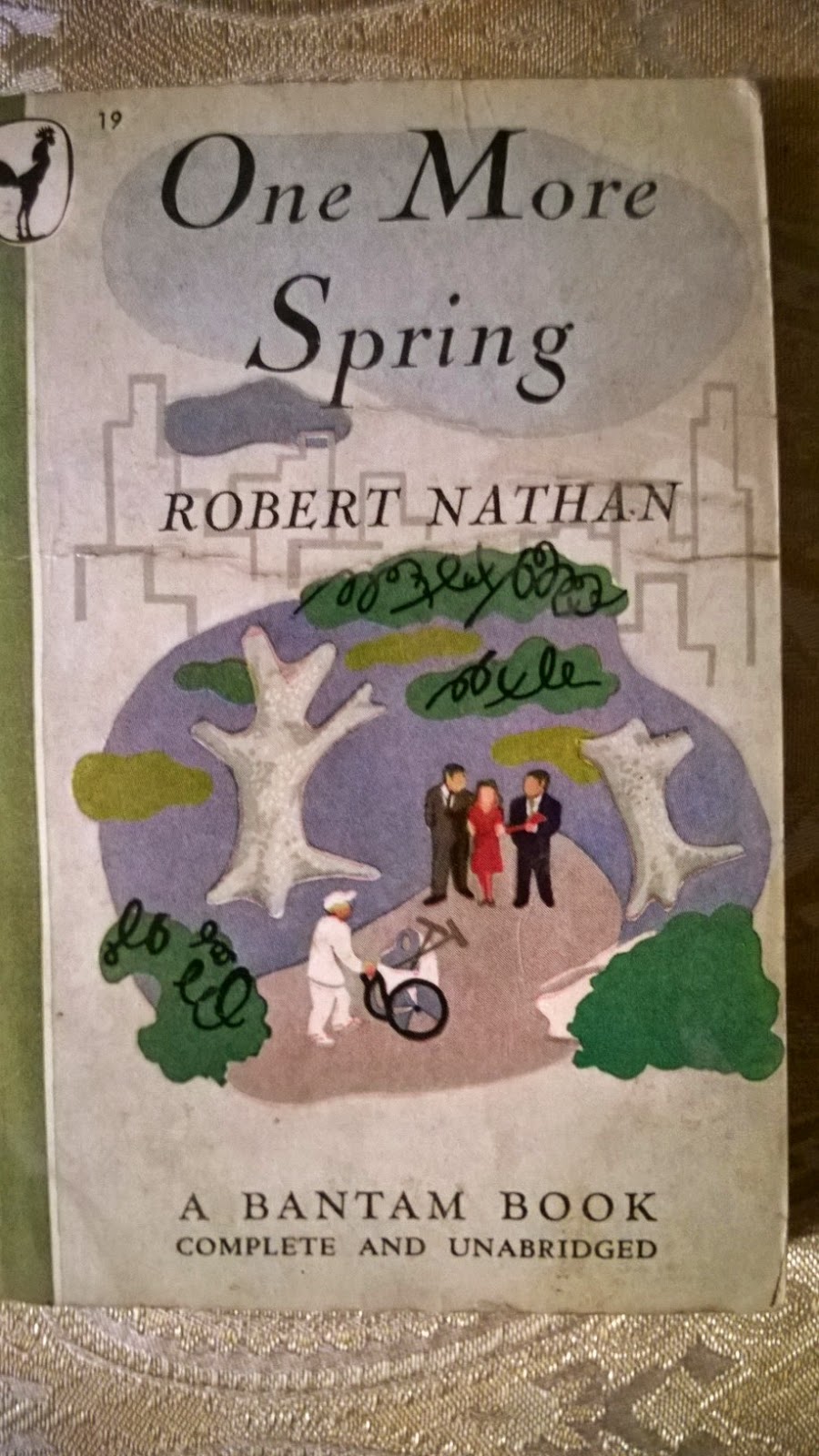 Portrait of Jennie (and One More Spring), by Robert Nathan

This blog is about Old Bestsellers, and Portrait of Jennie certainly qualifies as such. But it's also to some extent about "forgotten" books, and in this case I'm not quite as sure Portrait of Jennie qualifies as "forgotten". But surely less well-known now than it once was. It does have the advantage of having been made into a reasonably successful movie. That said, I remember a panel at a convention some years ago about "Authors in danger of being forgotten". Peter Beagle was one of the panelists, and he cited Nathan as one writer he thought was on the way to being forgotten who should be remembered. (He also credited Nathan as something of a mentor to the young Beagle, and as an influence. You can definitely see the influence of a novel like One More Spring in Beagle's A Fine and Private Place, I would say.)

Robert Nathan (1894-1985) was a quite popular novelist in his time, and he had a very long career: his first novel appeared in 1919 and his last in 1975. (I remember seeing that last novel, Heaven and Hell and the Megas Factor, in bookstores when I was first buying books.) Besides Portrait of Jennie his best known work, also made into a well-received film, is The Bishop's Wife. In the SF field he is slightly known for his 1956 short story "Digging the Weans". His cousins included Emma Lazarus, who wrote the poem ("The New Colossus") on the Statue of Liberty; and Supreme Court Justice Benjamin Cardozo. He married seven times.

Portrait of Jennie is a very short novel at about 32000 words. (Most of Nathan's novels were quite short.) It was published in 1940, and made into a movie with Joseph Cotten and the appropriately named Jennifer Jones in 1948.

It's an odd and very haunting book. It fits into the category of "timeslip" novel, one of the most common SF tropes used by non-genre writers. (Other examples include Sumner Locke Elliott's The Man Who Got Away, Audrey Niffenegger's The Time Traveler's Wife, perhaps you could add Martin Amis' Time's Arrow or Ken Grimwood's Replay.)  I found it extremely beautiful and moving, though I don't think Nathan quite managed the ending: which isn't to say I can see a better answer. Indeed, even if I don't think the book perfect, I love it in a way that I perhaps don't love books that I might think more fully executed.

It's about a young struggling artist who meets a mysterious little girl playing by herself in a park.  He befriends her and learns that her parents are high wire jugglers.  Then she disappears,but reappears a few more times, always a few years older.  After a while the artist realizes how strange things are, and this girl, Jennie, always seems to know.  Basically, she seems disconnected from time.  The artist's sketches of Jennie give him the break he needs to make his career, but before long Jennie is all he cares about.  The book moves quickly to the inevitable ending.  Parts of it, as I said, are extraordinarily haunting: the images of the lonely girl in the park bring tears to my eyes as I type.  And there are some very fine lines as well.  Really a very good book. The movie, by the way, is not bad, though not as good as the book.

I ran across another Nathan novel at an antique mall: One More Spring. It was published in 1933, and it is very overtly a Depression novel, written essentially as the events portrayed occur. And, perhaps as a result, it is rather a bitter book, despite essentially attempting to tell a sweet story. (It was also filmed, though less successfully than Portrait of Jennie or The Bishop's Wife, and Peter Beagle mentioned that it was lost for a long time, but that a print had been found shortly before the convention I saw him at, and he (Beagle) had seen a screening. It starred Janet Gaynor.)

The main character is an antique dealer, Mr. Otkar, who has to close his shop because of debt. He is left with one large bed. When a likewise penniless violinist, Morris Rosenberg, shows up, they decide to take the bed to Central Park and live there. After one cold night they befriend a street cleaner, who lets them stay in his equipment shed, in exchange for violin lessons. For a bit they feed on pigeons and such, and contemplate stealing a pig from the petting zoo, but then Rosenberg manages to make some money playing on the street corner. But when Mr. Otkar tries to steal from a restaurant, he instead rescues a young woman, Elizabeth, also stealing. She is a prostitute, but with a heart of gold naturally -- driven to prostitution by destitution. She joins them and the three people spend a (chaste) winter in the park, helped by Mr. Sweeney and his wife, who works at a bank. But the bank fails, and the bank president runs away in despair, ending up at the park with the others. They protect him for a bit, but he ends up turning himself in, and finding that the bank will survive anyway. Rosenberg ends up on his feet, more or less, and Mr. Otkar and Elizabeth realize they are in love, but so disillusioned with the world that Mr. Otkar refuses a job offer from the bank and the two decide to wander across the country, living in fields and parks, and likely starving (the author tells us) the next winter. A sad but often sweet novel, not in any real sense believable (but not asking to be believed), and as I said underlaid with bitterness over the economic conditions of the time. Notable is the cynical portrayal of the bank president -- not actually a bad man, nor even corrupt, but quite oblivious to anyone's distress but his own, despite the fact that his circumstances, while straitened, are not nearly so bad as most people's.
Posted by Rich Horton at 7:57 PM