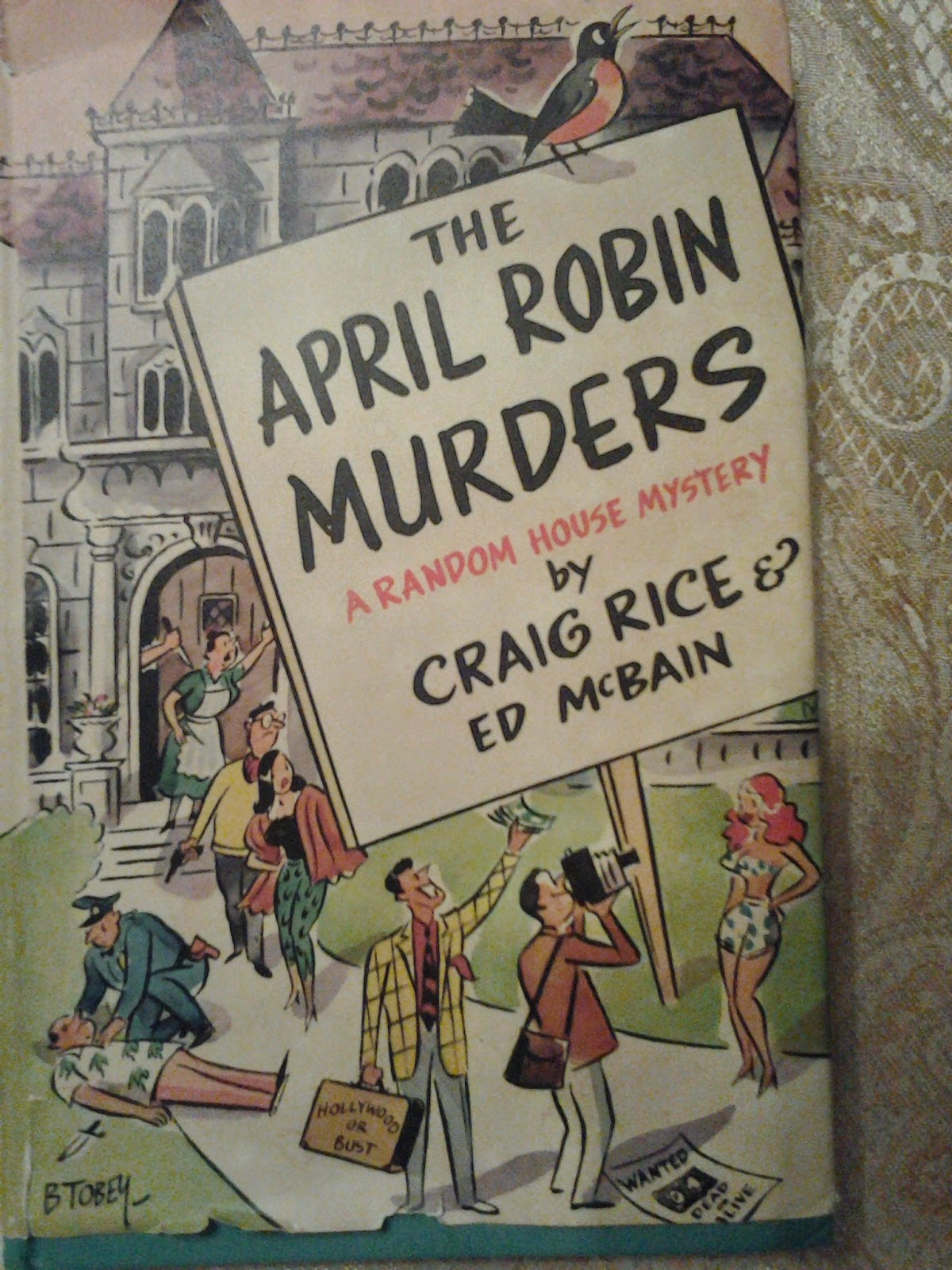 The April Robin Murders, by Craig Rice and Ed McBain

A little break from old bestsellers this week. Instead I'm writing about a detective novel from the '50s.

Craig Rice was born Georgiana Ann Randolph Craig in 1908. Her parents did not want an infant messing with their world traveling, and basically abandoned the child to a string of relatives. Eventually she settled with an aunt and uncle, the Rices. Hence her penname, derived from her surname and her adoptive parents' surname. She was married four times and had three children, had numerous affairs, became an alcoholic, and died fairly young in 1957.

Ed McBain, best known by far for his 87th Precinct novels, was born Salvatore Lombino in 1926 and legally changed his name to Evan Hunter in 1952. (He always said Hunter was the most innocuous "white-bread" name he could come up with, but the name also echoes a couple of schools he attended.) Ed McBain was his usual pseudonym, but he also often published as Hunter, and early in his career published as S. A. Lombino. Though best known for his mysteries, he published a number of SF stories, mostly as Lombino or Hunter but also under a few more pseudonyms. (I have read a couple of the Lombino stories, his earliest, and wasn't impressed, but he got better.) He died in 2005.

Craig Rice's most successful series featured a detective named John Joseph Malone. But The April Robin Murders is from her second series, which featured Bingo Riggs and Handsome Kusak, a pair of small-time photographers who keep getting into trouble and needing to solve mysteries to get out of it. The April Robin Murders was left unfinished at Rice's death in 1957, and McBain finished it and it was published in 1958. The back cover copy of my edition (a book club edition, which I found in an antique store in Union, MO) says that the book was 3/4 finished, but, according to Wikipedia, McBain, that is, Hunter, claimed it was only half-finished and he had to solve the mystery before finishing it. Based on style and pace, I would have guessed Rice wrote rather more than half the book, though I certainly believe McBain came up with the solution.

Bingo is the main POV character. He and Handsome have come to Hollywood to make their fortunes. (They started in New York.) They call their company The International Foto, Motion Picture, and Television Corporation of America, but basically they are street photographers -- taking pictures of tourists and offering to develop the prints for a price.

In Hollywood they go looking for office space and a home; and they seem to succeed easily ... though to the reader it's obvious that they are being taken in by a con man when they "buy" their house. The house, they are told, was once the home of the legendary movie star April Robin. But now it is abandoned except for a rather sinister caretaker. The previous owner, Julien Lattimer, died in mysterious circumstances. But, they learn soon enough, a body was never found, and moreover there are two wives, his fourth and fifth, disputing the matter. The fourth thinks Lattimer is dead (we assume murdered by the fifth wife), and so she should get the inheritance, while the fifth claims Lattimer is alive and so she still gets the property.

In good time there are a couple of further murders, and Bingo and Handsome are in a bit of a pinch, between the importunings of a couple of different conmen, the interests of agents and producers and neighbors, and the suspicions of two policeman, a classic good cop/bad cop pair. The solution is a bit intricate, maybe a bit of a stretch, but not a bad one -- involving (as it should) the mystery of April Robin's brief career along with the stories of Julien Lattimer, his wives, and a couple of other people Bingo and Handsome bump into.

For the first two thirds or so of the book things meander along. The main interest is in the characters of Bingo and Handsome -- neither terribly intelligent, both quite likable, Handsome with maybe better instincts but Bingo a bit more agressive and hopeful. Really all this is very fun -- funny in a rather understated way, a bit sad in that you really like Bingo and Handsome but you can see that they're not at all in control of their lives. Then towards the end there is a distinct acceleration, and a slight change in style, and the characters, though not inconsistent with themselves, seem to change focus a bit. I assume that's McBain taking over, but you could argue that it's more a case of the writer, whoever it was by then, realizing that it's about time to get things moving and finish the story.