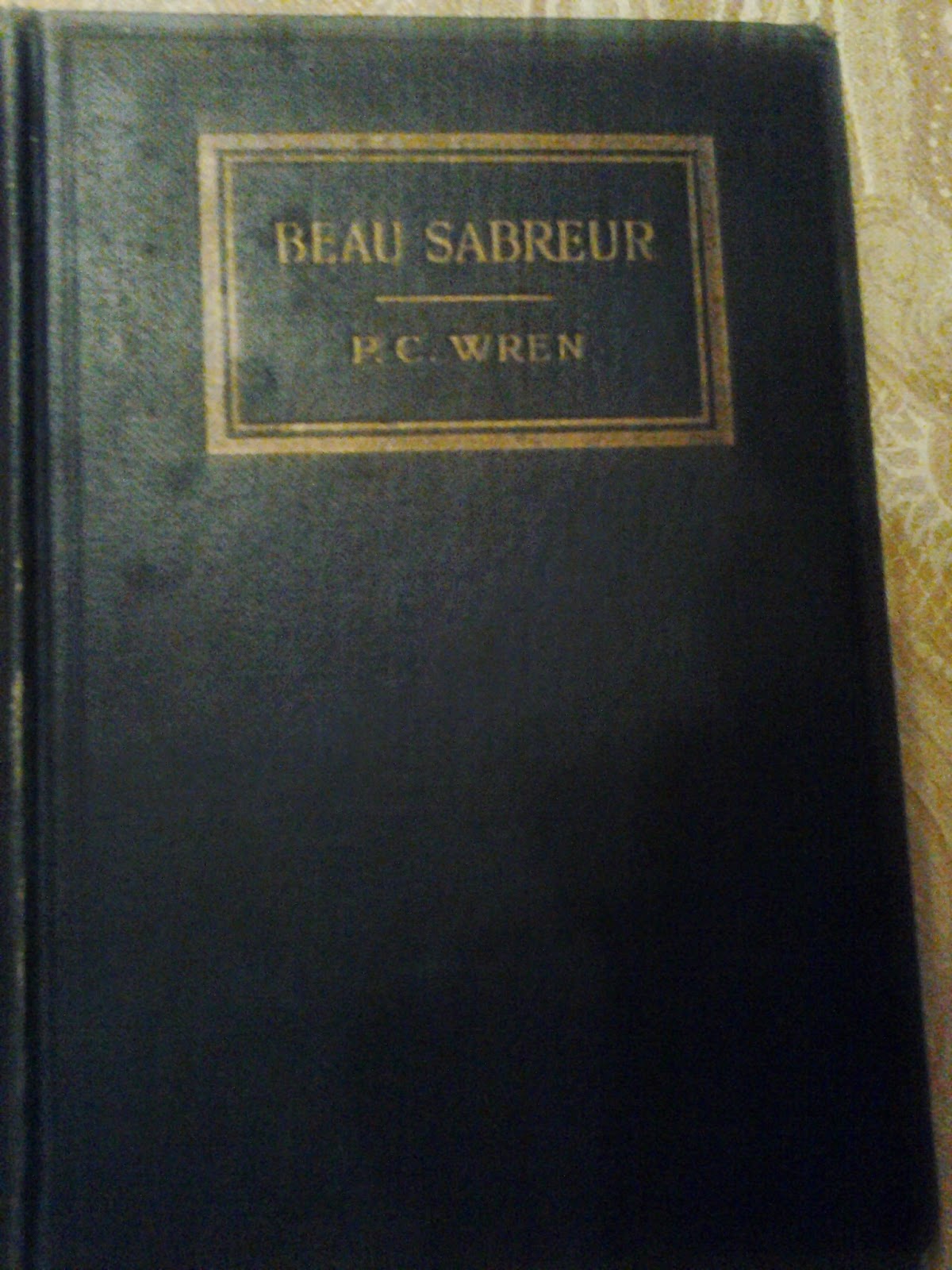 Long ago, when I was a teenager, I read P. C. Wren's most famous book, Beau Geste, a story of some English brothers in the French Foreign Legion. I remember enjoying it, don't remember much else ... it was a well-known book (and has been filmed several times, perhaps most famously in 1939 starring Gary Cooper) but I frankly had no idea there were any others.

It turns out there were several sequels (of sorts) to Beau Geste, and some related short stories. I found copies of Beau Sabreur and Beau Ideal cheap, and I decided to read Beau Sabreur, because I saw it referred to as the second of the "Beau Geste Trilogy". This turns out to be inaccurate in a sense, because the story of the Geste brothers ultimately filled (one way or another) 5 volumes (4 novels and a collection). And, as I found out, Beau Sabreur is only a very indirect sequel.

P. C. Wren was an Englishman, born 1875, died 1941. He spent some time in India, mostly as a schoolteacher, though he did serve in the military briefly. He claimed that he spent 5 years in the French Foreign Legion after the deaths of his wife and daughter, but there are no records confirming this, and the balance of opinion seems to be that he made that story up. Apparently the details of Foreign Legion life in his novels are quite accurate, however.

His early books are mostly textbooks for use in Indian schools, and one collection of stories set in India. But he began to produce adventure stories in about 1914. Beau Geste appeared in 1924, and was a great success. Beau Sabreur appeared in 1926. My copy appears to be a US first edition (no dust jacket), published by Frederick Stokes.

The novel opens (after a brief preface in which Wren avers that despite the critical complaints that some of the events in his books are implausible, they all actually happened) with what is represented to be the "unfinished memoirs of Major Henri de Beaujolais". De Beajolais begins, confusingly, with him in disgrace in the brig, punished for going AWOL (to help a woman in a fix) ... this turns out to not be important to the story at all. He jumps back to his enlistment as a buck private in the French Army (a Hussar regiment) -- his Uncle, an ambitious General, insisted he enlist after he left Eton -- apparently to teach him how real soldiers live. After a year he can use his Uncle's influence to get a commission as an officer. And so several chapters go by, mostly humorous in tone, describing his early time in the army, during which two important things happen: he meets a regular soldier who becomes his long-time servant, and he forces out a treasonous fellow soldier.

Then the action jumps forward a couple of decades, and South to North Africa. (This action appears to be set in perhaps the first decade of the 20th Century). De Beajolais, now a Major, is an important figure in the Intelligence branch. His previous two decades of service are briefly described (the reader of Beau Geste may recognize one significant event he was involved with -- I did not remember it, though).  He is in North Africa, assigned to deal with the problem of the sudden rise of a dangerous Emir among the tribes of the Sahara. While in Zaguig, a "holy" city that is on the brink of exploding, he meets a beautiful American woman, Mary Vanbrugh, along with her maid Maudie Atkinson. As the city erupts in violence, his duty requires him to slink away, to try to find the mysterious Emir and negotiate a treaty with France. Mary Vanbrugh is disgusted with him -- he deserts the French garrison there (including a fellow intelligence officer, his closest friend), who face certain death. Mary's brother stays in Zaguig to die as well, but de Beaujolais and a couple of guides, along with the two women, escape to the desert, where Mary is disguested again when de Beaujolais chooses duty overy loyalty and leaves Dufour and his Arab servant to die in order cover his (and the women's) escape, after which they are captured by the Emir's people.

Here de Beaujolais attempts to negotiate his treaty with the Emir, but there is a rival in camp, representing another power. And it seems that the Emir is infatuated with Maudie, while his Wazir desires Mary. Will de Beajolais sacrifice the women's virtue for a treaty with France? Or will he sacrifice his own life to save the women? His memoir ends abruptly, apparently revealing the answer to that question.

Then the novel transitions to an account from the point of view of "two bad men" -- the Emir and the Wazir. This rapidly (if implausibly (sorry, Mr. Wren!)) unravels a whole series of mysteries, brings things to a neat conclusion, and also reveals at last the link between this novel and Beau Geste. (Which, again, may have been clear already to readers with fresher memories than me of Beau Geste.)

What to say on the whole? The heart of the novel is a pretty fair adventure story. It begins too slowly, and parts of it are uneven. And, yes, much of it is implausible, but acceptably so for its genre. That said, the attitudes towards Africans are, frankly, racist, if in that sort of fawning "acknowledging their strengths" manner. And it is, after all, a story of colonialism from the point of the colonizers, and it's hard for a contemporary reader not to think, "Hey, these Africans resisting French control? They've got a point!" I suppose, in that sense, the novel is "of its time", which probably contributes to it being rather forgotten today.
Posted by Rich Horton at 8:47 PM