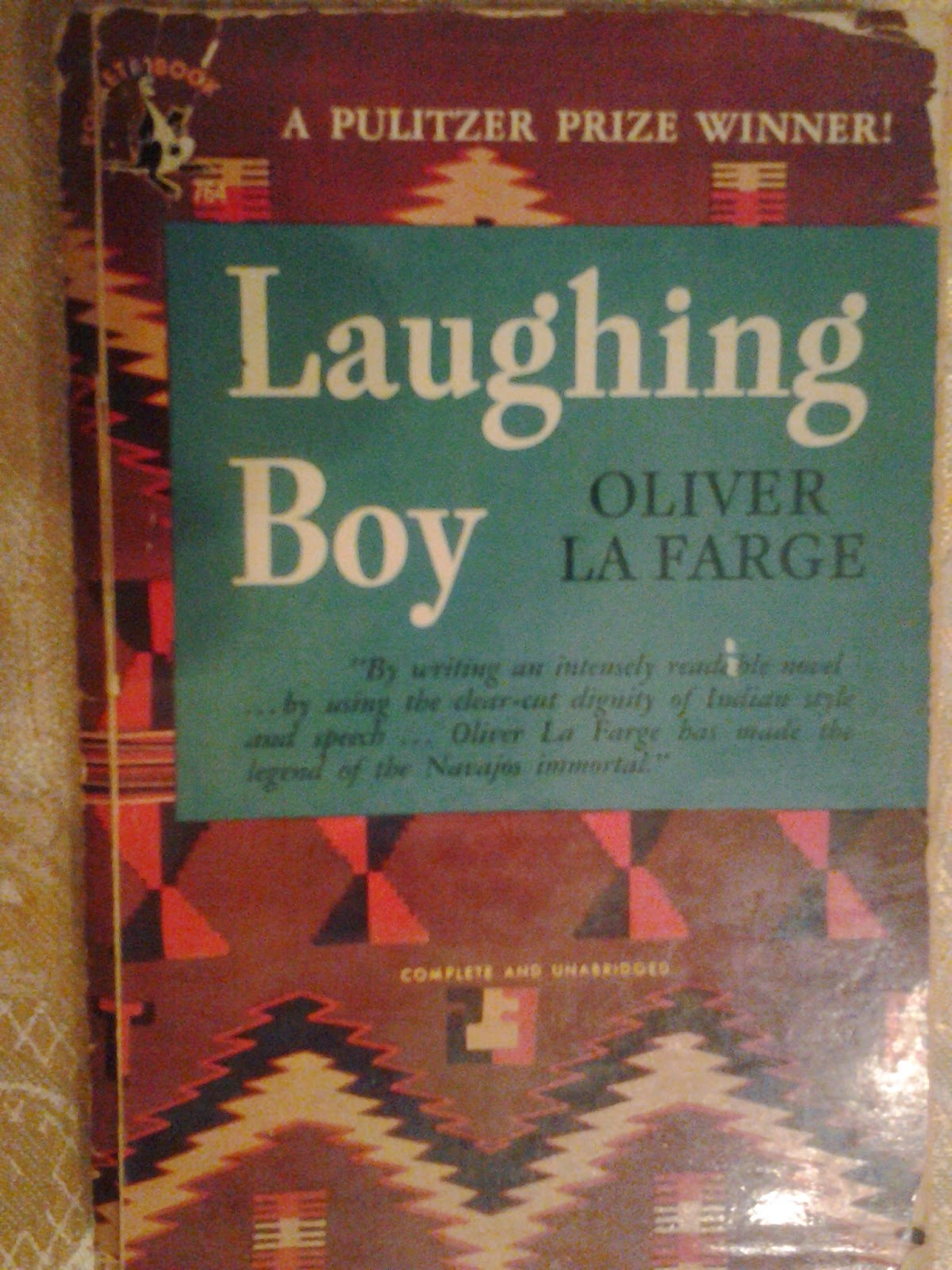 I don't know for sure that Laughing Boy was a major bestseller when first published in 1929 -- it doesn't show up on any of the bestseller lists I can find (which typically list the top ten each year). But it probably sold reasonably well, and has kept selling at some level for quite a while. It seems to be still in print, with the most recent edition from Mariner Books in 2004. Most importantly, it won the Pulitzer Prize in 1930. It was made into a movie in 1934, by most accounts not too successfully. (It starred two Hispanic actors, Ramon Novarro and Lupe Velez.) So, it's not precisely forgotten, but it has somewhat dwindled from the general consciousness over time, in part because Native Americans tend to resist (somewhat reflexively) any depiction of Native American characters by outsiders.

Oliver La Farge, full name Oliver Hazard Perry La Farge, was born in New York City in 1901. As his full name suggests, he was the grandson of Commodore Oliver Hazard Perry, famous for winning the naval Battle of Lake Erie during the War of 1812. La Farge was also a descendant of William Brewster, spiritual leader of the Pilgrims of the Mayflower. (I will note by the by that I too am descended from a Mayflower passenger, though my ancestor, Richard Warren, is much less significant (and he apparently was not a Puritan).)

La Farge attended Harvard, receiving a Bachelor's and a Master's. He was an anthropologist, and spent time in Central America and Mexico, discovering a couple of languages then unknown to Europeans, and doing important work on the Olmecs. But his most significant work was with the Navajos, on the reservation (or Navajo Nation) in Arizona, Utah, and New Mexico. The introduction to my edition of Laughing Boy claims that Indians of other tribes thought La Farge was Navajo (though likely no Navajo thought the same). He was an advocate for Native American rights and for some time was President of the Association for American Indian Affairs. He died in Santa Fe in 1963.

Laughing Boy was his first and by far most successful novel. I had encountered one previous story by him, "Spud and Cochise", which appeared in La Farge's collection A Pause in the Desert (1957) and was reprinted in the December 1957 F&SF. I saw it when it was featured in Spider Robinson's 1990 anthology The Best of All Possible Worlds. The conceit for Spider's book was that he chose several of his favorite stories, and the authors of those stories each chose a personal favorite as well. "Spud and Cochise" was Larry Niven's choice. I remember enjoying that story, which is why I picked up Laughing Boy when I saw it at an antique mall. My edition is a 1951 Pocket Books reprint. The official first edition appeared in November 1929 from Houghton Mifflin, but the "true" first appears to have been the Book Club edition, from the Literary Guild, in September 1929.

Laughing Boy is the name of one of the lead characters, a traditional Navajo, in about 1915. He is a young man, a silversmith of some modest note, and he comes to a dance at the southern part of Navajo Nation. There he finds himself entranced by a girl he doesn't know -- a very beautiful but unconventional young woman, called Slim Girl. Before long they have decided to marry, despite the misgivings of Laughing Boy's uncle.

We soon gather that there is a dark side to Slim Girl's life. She insists that the couple live isolated from the rest of their society, near a reservation border town, into which she disappears every so often. She has a fair amount of money and wants to earn enough to set them up well. She also wants Laughing Boy to teach her the traditional ways of Navajo society, such as weaving and general manners. The reader soon learns that she grew up in a White milieu, and grew discontented with American ways, particularly after she was seduced and made pregnant, then cruelly rejected by the missionary priest who had befriended her. After a miscarriage she became a prostitute, eventually becoming the mistress of a rich cowboy. Her plan is to take as much money from that man as she can, then move with Laughing Boy back to his true home. All this is unknown to Laughing Boy.

The story is structured, then, as pure tragedy -- their inevitable doom is clear from early on. And so it goes, quite affectingly. For all her flaws, we sympathize with Slim Girl, and Laughing Boy is a very likeable character. The resolution is powerfully portrayed. I enjoyed the book a great deal.

For all that one does wonder how well a New Yorker from a privileged family really understood Navajo culture from the inside. From my (ignorant) perspective, La Farge seems to do a good job, but I'm sure he got things wrong, and for all his good intentions there is a sense of something just a bit like patronization in his depiction of the Navajos. He's clearly on their side, but -- I don't know. That said, I suspect a 21st Century American Indian (especially a non-Navajo) would have difficulty as well -- it's quite clear that to a great extent the Navajos of Laughing Boy's time were isolated from the main stream of American culture much more than reservation Indians of today are. So -- an interesting and moving book, with a lot of depictions of Navajo life -- the dances, the marriage customs, the weaving and other artwork, the horse's place -- that ring true to my ears. Did it deserve the Pulitzer if books like The Sound and the Fury and A Farewell to Arms (not to mention Look Homeward, Angel, not a book I'm a partisan of) appeared the same year? I'd say probably not -- but I did enjoy it.
Posted by Rich Horton at 9:29 PM