I wrote this piece way back in May of 2003, but as this issue -- the only issue -- of Star Science Fiction recently came up in conversation, and also I recently acquired Chandler Davis' collection It Walks in Beauty, the title story of which appeared first in this magazine, I thought I'd reprint it now. 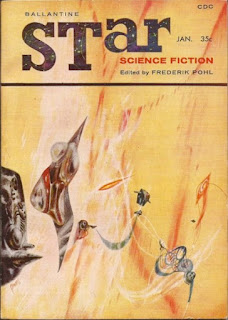 As I'm sure I've made clear in these pages, I collect old SF magazines. Sometimes I buy them for just one story -- for example I've been looking for the uncollected stories of Poul Anderson lately. But usually I end up reading several of the stories in any given magazine -- all the really short ones, and any longer ones that look even remotely interesting. I've read a number of decent stories that way, and I've gained a pretty good (I think) feel for the general zeitgeist of 50s SF, and for the nature of the various magazines of that time. But, probably not surprisingly, I rarely if ever come across stories that could be called neglected classics. Pretty much, any story from the 50s that was particularly good got noticed and anthologized.* (Certainly the uncollected Anderson stories are generally uncollected for understandable reasons -- though I think those stories in general good enough that a retrospective collection would be a worthy project.)

(*That said, from the perspective of 20 years or so later, I think I have come across enough unanthologized or barely anthologized '50s stories that deserve to be better remembered that I could assemble a fine small anthology.)

Pretty much all the good stories were anthologized. But I think I may have found one counterexample. I bought a copy of the January 1958 issue of Star Science Fiction. This magazine, which lasted only one issue, was edited by Frederik Pohl, and it was an attempt to turn his successful original anthology series into a magazine. I had never heard of it until I read a Bud Webster article about the Star anthologies in, as I recall, NYRSF, a few months ago. Well, one of Poul Anderson's stories that has never appeared in a book is "The Apprentice Wobbler", which appeared in this issue of Star. So I found a copy and bought it.

But, alas, the Anderson story isn't the neglected classic. In fact, it's a very minor story that reads like a Randall Garrett made-to-order-for-Campbell story, about psi. A corporation sends an engineer to investigate the small company that has been producing machines that allow people to levitate and move objects and create energy, with the intention of discrediting them. In pure Campbell manner, the guy discovers that psi is a real power, but you can't use it if you have even a shred of disbelief, so the machine is just a placebo to make you think the power is coming from elsewhere blah blah blah. Competent, to be sure, it being Anderson, but not very good. I wonder why he didn't sell it to Campbell? Or maybe Campbell bounced it.

But there are several other stories in Star. Indeed the magazine is quite good. I'm not sure why it didn't survive -- I suspect Ballantine, the publisher, may not have been well tied into the magazine distribution system. Also, 1958 wasn't a very good time to start a magazine -- around that time is when the SF field went through one of its crashes, in great part due to the collapse of a major magazine distributor. (Curiously, I have also seen people blame Sputnik!) Finally, though the magazine was high quality, it was very thin, only 128 not very tightly packed pages, for 35 cents, a high end price in those days. Perhaps buyers felt they weren't getting full value in terms of word count. Physically, I liked the look OK -- a beautiful yellowish Richard Powers cover, and interior illustrations all by Powers, but I don't know how widely Powers' abstract style appealed, especially for interiors.

Another notable story this issue is "Judas Dancing" (better known, I believe, as "Judas Danced"), by Brian Aldiss. It's a time viewer story, plus a time travel story, about a multiple murderer who is repeatedly resurrected (via time travel) along with his victim. It reminded me a bit of Damon Knight's "The Country of the Kind".

There is also an Algis Budrys story, "Mark X", under his pseudonym "John A. Sentry". I'm puzzled as to why he published the story under a pseudonym, because it deals with an idea he used in several Astounding stories -- a quasi-intelligent device called an AID which is implanted in people's brains. In the Astounding stories it's used in a war against aliens called Eglins (after the Air Force base in Florida?) -- it prevents prisoners from revealing information under interrogation, and it implants a compulsion to get crucial information back to humanity. The best of those stories, and a favorite of mine when I was much younger, is "The War is Over", a really cool (if perhaps crudely told) piece about the efforts of an AID over many generations to deliver the title message. "Mark X" may or may not be in the same continuity -- it does mention the Eglins -- but it's set on Earth, and deals with an experimental new model of the AID, which turns out to have unexpected side effects. I didn't find it very convincing, though.

There is also a Robert Bloch fable about nuclear war, "Daybroke", which didn't quite work for me partly because of the contempt I felt it displayed towards people, and Isaac Asimov's story "S as in Zebatinsky" (aka "Spell My Name with an S"), about the possible wide ranging effects of a simple one letter change in a man's name. (Apparently inspired by Asimov's frustration over people misspelling his name.) And Gavin Hyde, who according to the ISFDB published only three stories, contributes a decent story called "Nor the Moon by Night", about a chess master who volunteers to be uploaded into a computer after death to serve as a chess instructor, and his despair at the loss of normal human feelings.

All those make a decent set of stories -- well above the average quality of an SF magazine back then, but the story that really surprised me was the opening novelette, "It Walks in Beauty", by Chan Davis. Davis is a mathematician who published roughly a dozen SF stories, beginning in 1946, the latest in 1994 in Crank! His best known stories may be "Letter to Ellen" (1947) and "Adrift on the Policy Level" (1959 -- from Pohl's anthologi series Star, #5). He's also known for refusing to testify before the House Un-American Activities Committee and being fired from his position at the University of Michigan as a result. He is a highly respected mathematician on his own terms -- having long since moved to Canada, to teach at the University of Toronto. He was born in 1926, and is still alive at age 95. He may be the oldest living SF writer after the death of James Gunn.

"It Walks in Beauty" only ever appeared in this issue of Star. [As of my writing -- it has been reprinted since as I will discuss later.] It's the story of a factory worker named Max. We learn right away that he is in love with a woman named Luana -- but soon we learn that she is some sort of a stripper, and that men regularly visit "houses" with these strippers -- and every so often one of them is chosen to be "jaypeed" and presumably enjoy her favors. A strange element is the "career girls" Max works with -- they are referred to as "it", and they dress mannishly, and they are regarded with a sort of pity and condescension. Max becomes friends with one such career girl, against his will pretty much, and he is exposed to some of the truth about "women" and "career girls". But can he react against his own social conditioning? The basic social setup is interesting but in the end I don't think it quite holds together, but the rather subtly portrayed look at male/female relationships, and the way it shows gender expectations distorting our perception of both men and women, trapping both sexes in stereotypical roles, really worked for me. Perhaps the story is a bit dated, but I was very impressed by it. I think it would be an excellent choice for some sort of "Tiptree Rediscovery Award", if the Tiptree folks did anything like that.

Maybe "It Walks in Beauty" isn't quite a masterpiece. But I thought it pretty darn good, and I'm surprised that it's never resurfaced since that first printing.

I actually, after writing this review, wrote to Ellen Datlow to bring this story to her attention for possible reprint at Sci Fiction. I'm not sure it was my prompting or something else, but in September of 2003 Sci Fiction did reprint "It Walks in Beauty" -- and with Chandler Davis' original (and preferred) ending. Pohl had asked for a change to the end, which in Davis' opinion (and mine!) weakened the story. I actually nominated it for a Hugo that year, on the grounds that it was sufficiently "new" due to the changed ending to be eligible; and also on the grounds that it was one of the 5 best novelettes of the year. And in 2010, Aqueduct Press published It Walks in Beauty: Selected Prose of Chandler Davis, which reprints several of his stories and a number of essays.