I had read a couple other things by William Makepeace Thackeray, but never yet his most famous novel, Vanity Fair. (I've called this an Old Bestseller Review, a nod to this blog's original purpose -- not because I have bestseller lists dating to the 1840s but because Vanity Fair was definitely a sensation on its appearance.) I absolutely love Thackeray's great historical novel, Henry Esmond, which I review here: 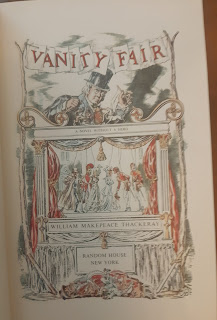 Along the way I had bought a couple of used editions of Vanity Fair, with the idea that I'd surely read it someday. But a couple of years ago I found a quite lovely boxed edition, from Random House in 1958, with illustrations by Robert Ball. I snapped it up cheap at the used bookstore where I saw it, which was, alas, going out of business. And, a bit later, I started reading it -- but then set it aside, for reasons to do partly with deadlines, and perhaps also partly the pandemic. Upon my retirement from my Locus column, some reading time opened up, and I decided to return to Vanity Fair. I read it over the next few weeks much, I suppose, as its original readers did -- a chapter or two at a time. (The novel was serialized in 19 monthly parts in 1847 and 1848. The book version appeared in 1848.)

This is one of those cases where my review is more or less superfluous -- Vanity Fair is one of the all time classic English novels. Numerous trees have given their lives for pieces about the book, professors have told their students what to think for a century and a half, and I'm sure many more illustrious book bloggers than me have weighed in. So take my brief look for what it's worth. I will say to begin with that this is an immensely entertaining book -- but that I still rank it behind Henry Esmond. Perhaps some of this is down to the accurate subtitle -- A Novel Without a Hero. In Henry Esmond there is no doubt that Henry -- for all his faults -- is the hero of his narrative (if, perhaps, partly because it is framed as his narrative.) Vanity Fair is framed quite differently -- the author (a fairly direct avatar of Thackeray) conceives of himself as a puppeter, manipulating his characters through their decades long adventures. And the main character, Becky Sharp, for all that she is one of the best known characters in Victorian literature, is not only not a hero, but is absent from the book for chapters at a time. The two most virtuous characters, Becky's friend Amelia Sedley, and William Dobbin, a friend of Amelia's husband George Osborne, doomed to a hopeless love for Amelia (who foolishly dotes on the worthless George); are presented as basically good but in different ways rather foolish. 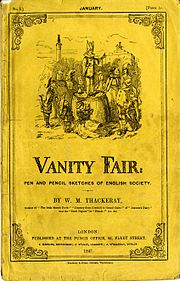 The action of the story extends from about 1814 to the early '30s. Becky Sharp is the pennyless orphaned daughter of a rackety couple -- an art dealer and a French dancer -- who has managed to get an education by teaching French at a school for young women of society, and who there befriends Amelia Sedley, the daughter of a wealthy man of business. The story follows, essentially, the love lives of the two women (using the term "love" perhaps unwisely!) Becky is from the beginning an amoral schemer, and, beginning with Amelia's brother Jos, she sets her cap at a variety of men -- failing to get Jos to propose she pivots to an elderly baronet, Sir Pitt Crawley, then to Sir Pitt's younger son Rawdon. Once married to Rawdon, who ends up penniless because of his family's objection to the marriage, she attracts a lot of sexual attention from society men, especially the rather vile Marquis of Steyne -- always with the object of getting her hands on money. Amelia, on the other hand, falls for the handsome but irresponsible and rather stupid George Osborne, son of one of her father's business partners; even while George's friend, the sometimes socially awkward (and not so handsome) Captain William Dobbin is pathetically devoted to her. Amelia's fiscal life is also fraught, partly because the elder Osborne disinherits his son after Amelia's father loses his fortune because of some unlucky investments. And when Amelia's husband dies at Waterloo, she is reduced to living in poverty with her parents, and forced to give up her beloved son to the Osborne family. Becky also has a son by Rawdon Crawley, but she has no interest in motherhood, and Rawdon Jr. also ends up with his relatives (despite his father's sincere love for his son.)

The novel follows the fortunes of the two women and their families, with Amelia selflessly (but often foolishly) serving her mother and father in their sad state, and mooning over her dead husband, never realizing how he betrayed her (for the most notorious example, by having a brief affair with Becky Sharp and urging her to run away with him just before the battle that took his life.) It is only Captain Dobbin's often secret interventions that keep Amelia barely above water financially, and that allow her boy to go to school -- but she never deigns to take notice of poor William except as a friend. Meanwhile Becky's adventures seem to prosper for a while -- with Lord Steyne's sponsorship, she becomes a fashionable if somewhat scandalous hostess, and she squirrels away some money even as her husband's debts mount. (There is a delighful chapter called "How to Live Well on Nothing a Year".) But Becky overplays her hand, and ends up separated from her husband and wandering Europe. The novel's concluding chapters resolve things by reuniting all the main characters to one degree or another, each getting a fairly appropriate fate.

As must be obvious, the aim of the book is satire. And it delivers in spades. The novel is stuffed with amusing and mildly grotesque characters -- pretty much the entire Crawley family, most obviously, and to a lesser degree the Osbornes and their associates, not to mention Captain Dobbin's military company. The plot is quite intricate, if a bit loose-limbed (an inevitable consequence, I think, of both the length of time covered, and of the serial method of publication (and presumably composition.) While the misadventures of the amoral Becky Sharp seem the moral center of the book, in reality no aspect of British society escape criticism. It is possible to have some sympathy for Becky's life circumstances -- she does seem to be treated unfairly because of her birth -- she squanders all that sympathy by her financial dishonesty, her apparently loveless sex life (though the book is far more circumspect about her actual sex life than the same book would be if written today), and most of all by her treatment of her child. And even Amelia, a much sweeter and more virtuous person, is portrayed as downright stupid, and terribly obtuse and unfair in her relationship with the only too faithful William.

The book is what its reputation says -- one of the great Victorian novels. It is archly funny, biting, and absorbing. I still wasn't transported in quite the way I was with Henry Esmond, but I'm not sure that was the aim of this novel. I'll get to another Thackeray novel some time in the future -- maybe Pendennis? -- but first I need to sample some other Victorians -- Trollope, Mrs. Gaskell, Collins, another Brontë novel besides Wuthering Heights and Jane Eyre ... who should it be?