Review: The Merman and the Book of Power, by Musharraf Ali Farooqi

The Merman and the Book of Power, by Musharraf Ali Farooqi 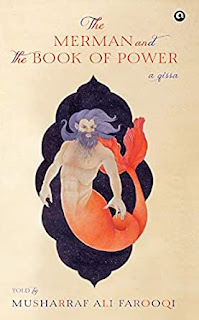 This is labeled "a quissa", which is "a fabulist storytelling form common to the oral and written literatures of Urdu, Persian, and Arabic". Wikipedia also suggests it's a particularly important literary form in the Punjab, a region common to both India and Pakistan. In this book the form involves a central plot interweaved with a great many shorter accounts which illuminate elements of the main narrative. The author is a scholar as well as a writer of fiction, and his story is based, the author's note says, on the "parallel histories, myths and multiple personas for Apollonius of Tyana, Hermes Trismegistus, Alexander the Great in the Western and Eastern literary canon, and the various religious, occult, and apocalyptic traditions associated with them." As such, many of the short tales are adaptations and translations of older texts. But this should not give you the impression that the book is at all dry -- instead, it is continually readable and interesting, telling a fine tale along with a host of fascinating older stories and descriptions of marvelous things.

The book opens with the sack of Baghdad by the Mongols in 1258, but the real action starts a year later, when a strange creature -- a merman -- is brought to Baghdad. The Governor, intrigued, arranges for him -- the merman's name is Gujastak -- to be housed away from the palace, under the care of Qazwini, an astronomer and also a religious authority. Qazwini becomes the central character of this book. It is his scholarly knowledge that (as a literary convention) allows us access to the numerous vignettes about historical events, magical creatures, old tales, and philosophical ideas that are interlaced with the primary story.

This central story concerns the captive merman and his lust for another captive, a slave girl called Aydan. Qazwini himself is attracted to Aydan, and much is made of her animalistic nature, and that of Gujastak, which is implicitly contrasted with Qazwini's less impressive vigor. Another major thread concerns an historical (to Qazwini) mission to Central Asia to investigate a "rampart" constructed to contain Gog and Magog, who may bring about the end of the world.

The result is an always fascinating amalgam of philosophical speculation, historical narrative, folklore and folk tales, and many stories of fantastical beasts. It never fails to entertain, and at the same time intrigue, with truly profound inquisition into the nature of the creatures described, the historical context, the religious context. And most of all, the book never bores -- it is frankly fun reading, no matter the depth of its imagination.