Birthday Review: The Master and Margarita, by Mikhail Bulgakov

The Master and Margarita, by Mikhail Bulgakov

a brief look by Rich Horton 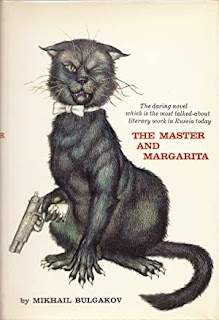 The Master and Margarita is a famous 20th Century Russian novel. It's also a fantasy novel, and a comic novel, and one of the great novels of the 20th Century. This is a slightly polished version of a fairly brief review I wrote back in 2000, reproduced here for the 130th anniversary of Bulgakov's birth on May 15, 1891.

It's set in Moscow, apparently in the '20s or '30s. One day a couple of literati are talking when they meet a strange man.  Before long the man is laughing at their confident assertion that the Jesus and the Devil don't exist, and telling a story about Pontius Pilate and his encounter with Jesus, or Yeshua, and also predicting the death of one of the two men.  When the death occurs, the other man goes mad. The strange man, who is, of course, the devil, and his associates, including most memorably a talking, gun-toting, very large, black cat, are spreading havoc throughout Moscow. Most spectacular is a catastrophic magic show. Those Muscovites who encounter the devilish group are mostly humiliated, sometimes killed or driven mad. One notable, perhaps ambiguous, exception, is the case of the Master, who has written a novel about Pontius Pilate which has been excoriated by the figures in power in the Moscow literary world, and his lover Margarita. Margarita encounters the devil, and goes through hell itself in an attempt to free the Master.

That's a very brief and perhaps not very persuasive description. But it really is a remarkable book. In some part it is a satire of the Soviet system, and perhaps for people in the present day not all of that lands. But that doesn't really matter. The book also satirizes the Russian literary scene -- and, again, we may not recognize the specific targets but it remains incisive and funny. Indeed it is a very funny book, and a very strange book. It presents an odd combination of very sharp and funny satire, striking descriptive passages, and some very moving events. It also has the power of staying in your head after you read it. And I found the several long passages about Pilate and Yeshua and Matthias the Levite very affecting as well. The fate of the title pair is powerful and perhaps confusing. 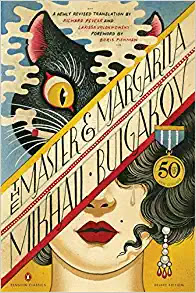 I read the Michael Glenny translation.  There are at least three others: a truncated version by Mirra Ginsburg (which dates, with the Glenny, to about 1967, when the book was first allowed to be published by the Soviet authorities), a more recent, quite highly regarded version, by Diana Burgin and Kathryn Tiernan O'Connor and an even new translation by the famous team of Richard Pevear and Larissa Volokhonsky.  The novel itself was written between about 1928 and Bulgakov's death in 1940.