Cheerful Weather for the Wedding/An Integrated Man, by Julia Strachey 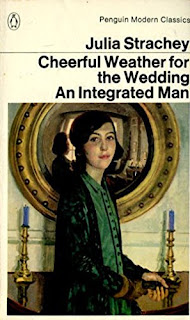 Julia Strachey was born in India in 1901, the daughter of Oliver Strachey -- and Oliver Strachey, a civil servant, was also Lytton Strachey's older brother. They moved back to England 6 years later, and Strachey's young life was further ruffled by her parents' divorce a few years later. She became sort of multiply a kind of second generation Bloomsburyite -- not only was she Lytton Strachey's niece, but her father's second wife, Ray Costelloe (a mathematician/engineer and a major figure in the suffrage movement) was Virginia Woolf's sister-in-law (extended). She began writing occasional short stories, and in 1932 published a short novel, Cheerful Weather for the Wedding, that was very well-received at the time and has retained its reputation, having been reprinted as recently as 2009 by Persephone Books, and having been adapted (not terribly successfully, it would seem) into a film in 2012. She never did write regularly, it seems, and her only other novel appeared in 1951 as The Man on the Pier. It was reprinted along with Cheerful Weather For the Wedding in 1978, under Strachey's preferred title, An Integrated Man. Strachey died a year later; and a few years after that her lifelong friend Frances Partridge assembled the fragments of autobiography she had left behind with additional material by Partridge as Julia: A Portrait of Julia Strachey by Herself and Frances Partridge. (Frances Partridge, sometimes called "The Last of the Bloomsbury Set", was an interesting figure herself, living to just a few weeks short of her 104th birthday in 2004.)

So, a curiously sparse bibliography. Her stories (and some poetry) don't seem well-regarded, but her novels (especially the first) and the strange memoir are still remembered. I had not heard of her until recently, but the novels looked interesting, and writers of the first half of the 20th Century are always worth a look (for me), so I found a used copy of the 1978 Penguin omnibus of the two novels. 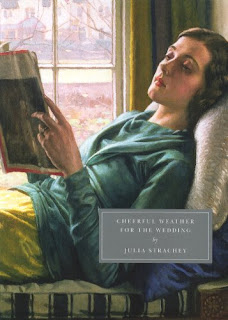 Cheerful Weather for the Wedding is really only novella length, perhaps 23,000 words. It takes place over just a few hours, on the day of the wedding of Dolly Thatcham to Owen Bigham. They are being married from the Thatchams' country house near Malton, which is a town that also features in An Integrated Man. (I suspect this Malton is not the real Malton in North Yorkshire, because this town seems close to the sea, while the real Malton is about 20 miles away from it.) There is not much in the way of plot (though over time some secrets do surface) -- the story is confined to the house, and to the actions of various family members, servants, and an ex-boyfriend of the bride.

It's a satirical piece of writing, though in a more affectionate than cutting way. The various characters each get a look-in, enough that we know them a bit. Dolly seems perhaps a bit unsure of her coming nuptials, or perhaps just nervous ... she takes forever to get ready, and gets drunk in the process. Her sister Kitty is worried about being thought provincial and perhaps rather overcomplicated. Young Tom is furious at his younger brother Robert for insisting on wearing hideous socks, mostly because he's convinced a schoolmate will see them and the ridicule will be visited on Tom. Mrs. Thatcham is vague and rambling and insistent on the "cheerful weather" they are having for the wedding even though the day is windy and cold. And then there's Joseph, a former admirer of Dolly, who is pining and hiding from everyone else, hoping for an audience with Dolly.

It's nicely done, funny, very well-observed. There is a secret lurking in the background, that is subtly hinted at, never stated but clear enough to the reader. It's a portrait of a certain pre-War English class, not necessarily obvious to Americans, I think ... I mean, they have servants! But they're not upper class. 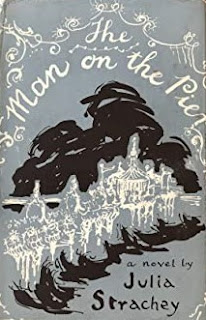 An Integrated Man is a different sort of book. Much longer, for one thing -- 60,000 words or so. It also displays Strachey's close observation, a real gift for interesting description of largely mundane things. It's set in the country, at Flitchcombe Manor, the home of Ned Moon's friend Reamur. Ned is the viewpoint character, the "integrated man" of the title, for so he declares himself at the open, a man of about 40, fully satisfied with his life, happy, and eagerly approaching his next challenge, a school he is opening with his friend Aron. He and Aron are spending a few weeks with Reamur and Reamur's wife Gwen; using the the time to finish preparations for the schoole, whilst Ned also tutors Reamur and Gwen's son Co-Co. The house party is soon to be expanded when Aron's wife Marina and their daughter Violet arrive. And for the first third of so of the book nothing in particular happens -- we just see Ned going about his normal days, and we get a sense of Ned's character, and a look at the environs of Flitchcombe Manor and the nearby villages. This works oddly well, mostly because of Strachey's excellent eye for detailed descriptons of small things.

The other shoe drops when Marina shows up. For, somewhat mysteriously, Ned decides that he is in lust with her. Indeed, that he must "have" her. And so while similar things happen to what happened for the first 60 pages -- walks across the countryside, group conversations, shopping at the village -- these things are all filtered through Ned's haze of lust. All this time Ned is trying to avoid detection, and often avoiding the rest of the party entirely. A bit to the reader's surprise, after some time Marina makes some little hints that she is interested in Ned as well.

So the conclusion comes -- the end of summer is near, school ready to start, and the house party will be breaking up. Ned and Marina awkwardly make an arrangement for him to come up to London for a couple of days, while Aron is setting things up at school. All Ned's desires are ready to be satisfied ...

The resolution, then, is (as we perhaps expect) painful and embarrassing. Ned comes to realize that it is his friend and business partner, Aron, whom he will betray -- and for a woman that he lusts after but doesn't seem to much like. Ned is forced to hurt Marina terribly, and to leave himself frustrated. And to realize that he is perhaps really not such an "integrated man".

I'm not sure how much I really liked this. I thought it was in many ways well done. I did believe in Ned -- of Marina and the others we get a much less full picture. And Ned's actions are, well, in the end proper (now as much as they were in 1936 when the book is set) though of course he should have acted (or not acted!) much earlier. As I've said, Strachey's paragraph by paragraph writing is strong, and her powers of description impressive. This book has moments of comedy, but it's not generally comic in the way Cheerful Weather for the Wedding is; and I suppose I felt that in the end the book was just a bit thin. But I'm not sorry to have read it; and I do think Strachey, though of course a very minor writer, still a writer worth continued attention.