I wrote this review for Fantasy Magazine when Emma Bull's (to date) last novel, Territory, was published, in 2007. Bull made -- and deserved -- a big splash when her first few novels (War for the Oaks, Falcon, Bone Dance, and Finder) came out, in the late '80s and early '90s. Since then she has written fairly little -- a collaboration with Steven Brust, one with her husband Will Shetterly, and contributions to the intriguing "web serial" Shadow Unit; plus this novel. I've enjoyed all her work, particularly Falcon, which is imperfectly constructed by which pushes all my buttons.

Emma Bull is one of those writers about whom my main complaint is that they don’t write enough. Her last novel, Freedom and Necessity (with Stephen Brust) appeared fully a decade ago. So I was delighted to see Territory on bookstore shelves this summer. 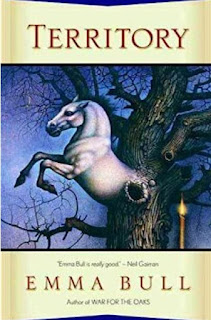 This is a fantasy set in the Old West, indeed, in Tombstone, Arizona, in 1880, in the months leading up to the Gunfight at the OK Corral. Bull focuses on three characters. Mildred Benjamin is a young widow making an independent life for herself as a newspaperwoman and as a writer of early “pulp” Western stories. Jesse Fox is a horse trainer, previously from San Francisco, who has wandered into Tombstone on the way to Mexico – or so he thinks. And Doc Holliday – well, we know who Doc Holliday is: a dentist, a card player, a Southerner, and a friend of the controversial Wyatt Earp.

Through the eyes of these characters we learn the dicey political situation in Tombstone. Much of the trouble is centered on Wyatt Earp and his brothers. Wyatt wants to be Sheriff, but has no formal position. Virgil is City Marshal. And there no account brother Morgan is on the other side, more or less, and as the novel opens he has just participated in an attempted stagecoach robbery that left two people dead. Doc Holliday manages to create an alibi for Morgan, but in the process becomes a suspect himself. Over the next few months tensions rise between the townspeople, the Earps, and the cowboys, some of them rustlers, who live outside of town – people like the McLaury brothers, John Ringo (supposedly an ancestor of the SF writer of that name), and the Clantons. And the truth about the stage robbery becomes fuzzy as the main suspects all meet violent deaths before they can be arrested.

All this is for the most part historical record. What makes this story a story is the personal experience of the main characters. Mildred is the most engaging, the best depicted. As a woman, she has a different view of the conflict, especially once she befriends the Earps’ wives. And her budding career as a reporter gives her a still different angle. Jesse Fox, meanwhile, has his own secret, one he is loath to admit to himself. He can do magic. His friend Chow Lung, a Chinese doctor, urges him to accept his abilities. And in so doing, he realizes that there are other magic users in Tombstone – including very likely both Wyatt Earp and at least one of Earp’s enemies. Finally, Doc Holliday is probably the least well realized main character – perhaps because he is historical. His viewpoint serves mostly as an inside look at Wyatt Earp’s “camp”.

At this level the book follows Jesse’s arrival, his investigation, with Chow Lung, of the murder of a Chinese prostitute, and his subsequent realization that the girl was a victim of the political eddies in Tombstone. Meanwhile Mildred moves from typesetter to reporter at the Nugget as she gets interested in the nasty doings of a mining company. At the same time she is romantically drawn to both Tom McLaury and Jesse Fox. And her knowledge of the situation of the Earp women puts her squarely in the anti-Earp camp. Meanwhile Doc Holliday is trying to escape Earp’s orbit, urged by his common law wife Kate. But Earp’s hold – magical, perhaps? – seems to prove too strong.

The book is quite a delightful read. Mildred and Jesse are engaging protagonists, if, as I mentioned, Doc Holliday is a bit thinner. The fantastical element is modest but well-integrated and well portrayed. I had just one major issue: as the end approached, I realized that the remaining pages were not possibly enough to contain the actual gunfight. And, indeed, the book rather suddenly stops – at a not unreasonable point, with certain crucial information just revealed, but not, it turns out, at the end of the story. Yes – once again we have a book that is only Part 1 of a series (of only two books, I believe) – with absolutely no indication of this fact in the book, or on the cover, or anywhere unless you poke around the author’s web page. I will certainly be happy to read the conclusion to this story – but it would have been nice to know going in that Territory is only the first half. [That's what I wrote in 2007, but no sequel has eventuated -- perhaps none was ever planned.]