Birthday Review: The Gifts of the Child Christ and other stories, by George MacDonald

I realized that it has been over a month since I posted on this blog. There are Reasons, of course (mostly 2020 reasons), but that's too long. So I figured I would post a birthday review today -- this one is something rather short I wrote about 20 years ago. (I hope to have "non-bestseller review" of a 20th Century woman writer, Julia Strachey, in a day or two.) 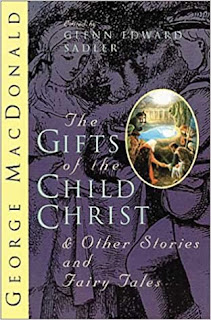 George MacDonald was one of the greatest, perhaps the greatest, 19th Century fantasist, a mentor to Samuel Dodgson (Lewis Carroll) and a key influence on C. S. Lewis. He was born on 10 December 1824, and died in 1905. He grew up in the Congregationalist church and become a minister, but eventually lost his job partly because of his somewhat unconventional theological views. I had thought he was a Unitarian (inside joke: from the period before Unitarians became lovers of Mary Oliver's poetry), but now I can't find that he ever officially left the Congregationalist denomination -- that said, his theology seems to me more in tune with 19th century Unitarian/Universalist thinking. (It should be noted that the formal Unitarian church (at least in the US) was founded as a result of schism with the Congregationalists.) He moved to the Italian Riviera in the 1870s and did much of his writing there. Much of McDonald's fiction was essentially religious. I am particularly fond of his children's novels, At the Back of the North Wind, The Princess and the Goblin, and The Princess and Curdie. He also wrote adult novels, most importantly Phantastes and Lilith.

He also wrote a lot of shorter fiction. The Gifts of the Child Christ and Other Stories, a collection of much of the best of his shorter works (selected by Glenn Edward Sadler). These include a couple of stories I have read before in solo editions: The Light Princess a very funny story about a princess with no gravity, either of spirit or physically; and The Golden Key, a lovely symbolic story about a boy and a girl and their long journey together. (My reviews of those two books can be found here.) Other highlights are The Wise Woman, or The Lost Princess, a long story (35,000 words or so) about a spoiled princess and a spoiled shepherd's child and the efforts of an old wise woman to reform them; the title story, about how the daughter of a too serious man and his neglected young wife brings them together after their younger child is stillborn; "The Carasoyn" (or "The Fairy Fleet"), about a young man and his less than enjoyable involvement with a group of fairies and their queen; "The History of Photogen and Nycteris" (or "The Day Boy and the Night Girl"), about two babies kidnapped by an evil fairy, the boy brought up only in daylight, the girl only in darkness; and "The Cruel Painter" is a fine story about a painter who insisted on distorting his scenes to bring out the worst in their subjects, and the young man who falls in love with his daughter and comes to work as his apprentice.

There are quite a few more stories, most quite interesting, roughly evenly divided between fairy tales or fantasies and contemporary tales. Only very rarely does MacDonald moralize to the detriment of his stories, though his stories do quite often make moral points. (And quite explicitly Christian points.) Sadler has also selected quite a few period illustrations, many by Arthur Hughes, many from the original publications of the stories.