Review: The Sky So Big and Black, by John Barnes

The Sky So Big and Black, by John Barnes 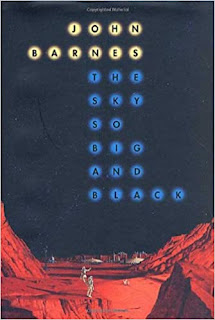 This is John Barnes' new novel.  It's set in the same future history as his novels Orbital Resonance, Kaleidoscope Century, and Candle.  Like Orbital Resonance, it's nominally YA, and very Heinleinian, and very much "to please adults".  It's something of a sequel to Orbital Resonance -- I don't remember that book that well, but I'm pretty sure the main character of the new book is a relative of the main character of the older book -- I think a niece.  It's also heavily related to Candle, far as I can tell, in that a main plot element is the takeover of Earth by the "One True" meme -- something I deduce happened in Candle, though I'm not quite sure. (I haven't read Candle.) (I say "Future History" but it's really an odd variant -- a sort of Future Alternate History, in that it's set in a future that branches from a near past (at time of writing) history that never happened.)

I just wanted basically to say that I loved this book.  As I mention, it's very much in the Heinlein Juvenile mode.  There are passages that seem pure quill Heinlein.  Here's the protagonist's father and her talking about education in the 20th Century:

"In fact what [20th C. students] got was either a specialty in some academic subject, like math or literature, or certification in some useful trade, like engineering or lying."

"They didn't have certification in lying!"

"Ha! The first place my grandpa taught was a program in something called "communications". Look up the curriculum sometime and tell me that's not a degree in lying!"

And there's plenty more in that vein, about personal responsibility and politics and human relationships.

But more than all that, it's just a good novel. Very well structured -- it's presented as a psychologist listening to a series of interviews he did with Teri-Mel Murray, a young woman on Mars who was working with her father as an "ecospector".  It's clear from the start that something terrible happened, and indeed that the psychologist was forced to erase Teri-Mel's memory.  It's also clear that he likes her a lot, and is really torn up by what has happened, and worried that he may have to treat her again, for some mysterious reason that takes a long time to become clear.

The interviews tell of Teri and her father travelling across the lightly terraformed planet to a "Gather" of the "rounditachis", people who live more or less in the open on Mars, working to help advance the terraforming.  Teri is hoping that she will be certified a "Full Adult" at the Gather, and be free to marry her boyfriend.  Her father wants her to go back to school for one more year, because he's not convinced that ecospecting will remain a good living.  As they travel, they plan to make one more attempt at a big "scorehole".  And Teri is starting to worry about her boyfriend.

All the above is cute stuff, and interleaved with neat SFnal details about the terraforming of Mars.  In the background lurk details about the future history up to this point, especially the takeover of ecologically ravaged Earth by a "meme" called "One True", or "Resuna", which more or less has turned Earth's population into a hive mind. Also we learn bits and pieces about the psychologist's feelings, which give us hints about the disaster which has clearly occurred.

So it's a scary book, as we learn to like Teri more and more, while we just know that she's going to get hurt real real bad.  And when the crisis comes, it's exciting, and terribly sad, and even scarier than I had first expected.

The resolution is moving, real, and, well, open. Barnes' future is on the one hand full of hope, and of cool SFnal stuff, and on the other hand it is very damned scary, and full of something purely evil, but not EVULL, somehow.

It's a darn good novel, and though it is written about a "young adult" (Teri is about 15), and though it is accessible and readable and appropriate (in my judgement) for teens to read, it is also very effective for adults.