Gene Wolfe would have turned 89 this past Thursday. Alas, he died last year. I am (belatedly) posting another one of my reviews in his honor. This is perhaps the best of his late novels, The Sorcerer's House, from 2010. This review originally appeared in Fantasy Magazine. 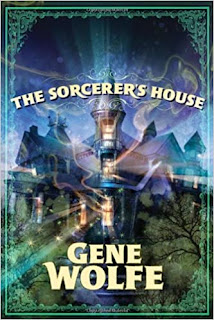 Gene Wolfe continues to publish interesting novels about every year. His new book is The Sorcerer’s House. It is a standalone novel, and, by Wolfe’s standards, a fairly simple one. It is also quite absorbing, a very nice read, and for all its relative “simplicity” stuffed with puzzles and with such Wolfean obsessions as twins, shapechanging, and virtue. And it is told in the familiar almost naïve first-person prose of many recent Wolfe novels.

The protagonist is Baxter Dunn, who has just been released from prison. We slowly gather that he went to jail for fraud, and that his victim, or one of his victims, was his identical twin brother, George. Most of the book is told in letters from Baxter to George, though Baxter also writes to George’s wife Millie, and to a friend he made in prison. And some of the letters here are addressed to Baxter.

Baxter comes to a quiet Midwestern town called Medicine Man. At first destitute, he comes by mysterious means into possession of a house called the Black House, which is rumored to be haunted. The house is quite odd – it is (of course) bigger on the inside than the outside, and its windows sometimes seem to look out on a landscape different that what one sees from the outside. And there are a variety of unusual characters attached to the house: another pair of good/bad twins, teenaged boys named Emlyn and Ieuan; a couple of weird butlers named Nicholas or Nick; a fox who sometimes seems to be a woman; and some magical implements.

Baxter also has encounters in the town, particular a series of variously interesting women: an attractive young widow, the older woman who revealed his inheritance to Baxter, a pert policewoman, etc. And the town is also menaced by a “Hellhound”. We are left to wonder what is really going on. Is Baxter really a criminal or did his brother betray him (perhaps because they both seem to love Millie)? Why did the mysterious Mr. Black leave his house to Baxter? From whence do all the odd creatures attracted to Baxter come – the fox woman, the werewolves, a vampire?

All this is familiar territory for Gene Wolfe’s readers. What may seem unusual is how relatively transparently it is all resolved. (Though the ending does leave a couple of open questions – I have my own answers, contradicting the plain narrative, but I’m by no means sure I’m right.) At any rate, it doesn’t quite achieve the depth of Wolfe’s very best work. But it avoids the frustration of a novel like, say, Castleview, at least to this reader, who knew there was something special going on beneath that book’s surface, but never quite figured it out. The Sorcerer’s House is, in the end, an entertainment, clever and satisfying – not great Wolfe, but good Wolfe, which is recommendation enough.
Posted by Rich Horton at 8:11 AM