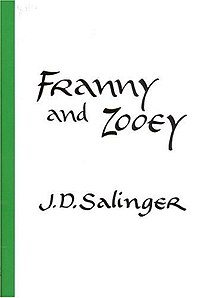 Franny and Zooey was J. D. Salinger's third book, published in 1961. The two previous books were his only novel (The Catcher in the Rye) and a story collection (Nine Stories.) The two parts of Franny and Zooey appeared in the New Yorker in 1955 and 1957.) It's a short book, and is usually described as comprising a short story ("Franny") and a novella ("Zooey".) In fact "Franny" is a longish short story at some 10,000 words by my rough count, and "Zooey" is a very long novella, perhaps 50,000 words. For that matter, the two pieces are intimately related, and if you ask me, they work together as a unified whole, and I think it makes a fair amount of sense to call the book a true novel.

This is the third Salinger book I've read. Like everyone else of my generation, I was assigned The Catcher in the Rye in high school, and like (it sometimes seems) only a few people, I rather liked it. I also read Nine Stories, and reread much of it just a few years ago. I think some of those stories are very fine. I could continue to the last book (Raise High the Roof Beam, Carpenters, and Seymour, an Introduction) but I am gathering that his work seemed to decline in quality as time went on, so perhaps I won't continue.

So I decided I'd read "Franny", because it's kind of short. And I read it through, liking it fine if not really loving it. It's the story of a few hours one weekend in which Franny comes up from her school (unspecified -- I thought it might be obvious to smarter readers but apparently it's not clear -- I'd have said maybe Vassar? maybe Mount Holyoke? but I don't know) to Harvard, where her boyfriend Lane goes, to attend the Harvard-Yale game. They go to a restaurant, and talk, and Franny is revealed as an interesting if a bit, well, immature young woman, while Lane is revealed as a prat (or "phony", Holden Caulfield would say.) Franny talks about books and her acting and about the odd book she's reading, The Way of the Pilgrim, about a man in Russia who is convinced that the way to spiritual truth is to continually recite a prayer: "Lord Jesus Christ have mercy on me". Franny doesn't eat and then gets sick. Lane mostly just gets mad that he's missing the game. By the end I was sure Franny was pregnant.

"Zooey" is set only a few days later, after Franny, in her delicate condition, has gone home to New York. It is basically organized around three communications between Zooey and his family -- first a long letter from his brother Buddy, next a long conversation in the bathroom with his mother, and then an even longer harangue (in a couple of parts) from Zooey to the distraught Franny. I kept waiting for the other shoe to drop about Franny's condition, but it never did, and eventually I realized Franny is NOT actually pregnant (though she probably was sleeping with the rather shallow Lane.) Instead she's having a spiritual crisis, based partly on her reaction to the book and its "prayer". Zooey, a TV actor, is unconvinced of the value of the book, and expresses some of his own philosophical notions, along with descriptions of his TV career, a couple of new scripts he's looking at, a potential movie he could appear in in France, and aspects of his family life. His and Franny's family, the Glasses, are Salinger's major fictional obsession -- the excellent story "A Perfect Day for Bananafish" features their older brother Seymour, who committed suicide. The children all appeared on a long-running radio show, which seems to have affected them in something like the way child actors are often depicted as being affected by early fame. Anyway, Zooey's ramblings (and really he does ramble) are sometimes interesting, somes just affected, to the point of occasional tedium. More to the point, he didn't really come to life for me, though Franny was a reasonably well done character.

I don't think this is a bad book, but it's not a great book either. It may be a book of its time ... probably it hit home a lot more directly in 1961 than now. I understand Salinger was quite upset that not just me but many readers assumed Franny was pregnant ... all I can say, it sure seemed like that's what we were expected to think. Salinger can (or could) write, but I think his prose was overrated at times ... it's original, has a real (though somewhat limited) voice, and certainly includes some sharp observation, but it never seemed quite striking to me, and sometimes just lost its way. Perhaps I write too much in awareness of where Salinger ended up ...