I thought I was going to post a Birthday Review today, because I was looking through the ISFDB's list of 4/10 birthdays and I thought I saw Raphael Carter's name, and I said to myself, "I haven't seen any work from them in forever, but the two Carter stories I saw were awesome, so ..." Then I realized it was a different R. Carter! But I don't know Raphael Carter's birthday, so why not go ahead and post this review anyway? The book is certainly worth remembering!

The Fortunate Fall, by Raphael Carter 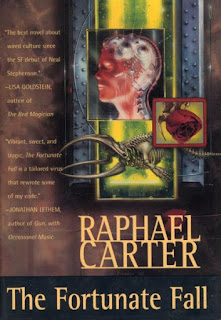 This is really, really, good. Set in the 23rd century, the Russian narrator (Maya, making at least three major SF novels this year to feature a major character named Maya (also Holy Fire and Blue Mars)) is a telepresence "camera": she "witnesses" news events, or anything which could be a story, and her total impressions (sensorium, plus memories: the latter including implanted memories of research on the subject) are transmitted over the net to her audience, although the output is "screened" by another individual (a "screener") who is totally linked with the camera, and who apparently filters sensitive or personal material, and makes sure that the sensorium output comes through OK (red looks red, stuff like that). We slowly learn that Maya has a "past" which she cannot remember, because memories of it have been suppressed, and that that past is related to her love life. We also learn that her world has emerged in recent decades from the domination of a group called the Guardians, and that it is now bifurcated into the technologically advanced, but isolated, African continent, and to something called the Fusion of Historical Nations, which seems to be a shaky reestablishment of roughly 20th century political boundaries.

Maya's latest story is about some of the key events in the liberation of Russia from the Guardians. As she begins her story, her old screener quits and she gets a new one. This new screener is revealed to have quite remarkable abilities, and also seems to quickly fall in love with Maya, which is difficult for Maya to handle because her sexual emotions are suppressed. Maya and Keishi (the new screener) begin to investigate some details of the defeat of the Guardians, details which are for some reason potentially embarrassing to the "new world order". Staying one step ahead of the law, Maya travels across Russia and through the net in search of an interview with a man who has some secrets about the Guardians, their successors, and the nature of the world and the net.

Carter pulls off a number of exciting, brilliant things. The nature of this new world and its history are carefully and slowly revealed, along with Maya's own past, and the resolution is well integrated, the tragic ending is both a surprise and not a surprise, and is "earned".

The technological and social details of life in the FHN are wonderfully well realized. In many ways, this book is reminiscent of Sterling in the way future tech and future society are densely integrated with the narrative, and seem so possible. The terminology (Postcops, Weavers, greyspace, etc.) is intriguing, and is introduced in such a way as to seem natural (there are very few lectures), but also be part of the mysteries which are slowly revealed. The realization of the how "mindlink" technology might really affect the world, and also the images of cyberspace, are believable and original.

The prose is very good, mostly clean and elegant, not showy, but occasionally erupting in apt and memorable images. In addition, the story has true momentum: it makes you want to keep reading. This is a gift that not all good writers have, and it's a great plus.

The book falls slightly short in a couple of areas (mere quibbles, really). Much of the second half of the book is a long narrative by the interview subject, and this method of telling the story seemed to me to create a bit of disconnectness. The story really has two protagonists, Maya and Voskrosenye (the interviewee), and their stories are well integrated, but still there is a slight slackening in that the two stories (Maya's personal one, and the story of the nature of Maya's world, which is mostly told through Voskrosenye) don't quite end in synch. Also, the Guardians are a bit stock as villains (though to be sure they are not the only villains). And I thought Maya's original crime was, well, not likely to be such a crime in the 23rd century. But I could be wrong about that.

This book really provokes thought. One virtue is that much is implied and never told, and we have a sense of a whole fascinating underpinning to this world (such as what the African culture is really like) which is hinted at but not explained. Also, the main themes of guilt and personal responsibility are well handled, and there is some very good stuff about the nature of love, and the nature of love on the net, or in Cyberspace, or whatever.
Posted by Rich Horton at 5:02 PM