Ian McDonald's birthday was back on March 31, but things have been a bit wild around here, and I didn't get around to posting this until today. 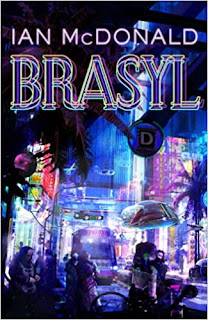 Ian McDonald's last novel, River of Gods, was in great part a portrait of future India, and so it is easy to view his new novel, Brasyl, as a portrait of future Brazil -- after, a country which is in some ways reminiscent of India, in its size, crowds, jungles, huge cities, and staggering diversity. While being at the same time wholly different. And to a certain extent I suppose that is true -- but only to a small extent. Brasyl ends up being about its SFnal idea more than anything -- that idea being the "we are a simulation running on a computer" one, with the variation being that the computer might be a quantum computer, which opens up parallel universes as part of the simulation.

It is told in three strands, divergent in time, and set in different major areas of the country. One is present day, and set in Rio de Janeiro, and focuses on Marcelina Hoffman, a producer of sensationalist reality TV. The second is set in 2032, in São Paulo, and focuses on Edson Jesus Oliveira de Freitas, an entertainment entrepreneur -- for example, his current project is a pretty girl who can keep a soccer ball in the air forever. The third thread is set in 1732, mostly on the Amazon, and focuses on Luis Quinn, a Jesuit "admonitory" sent to bring a renegade priest back to the fold.

Marcelina's new project is a TV show, timed to coincide with the 2006 World Cup, which will put the goalie who let in the losing goal in the shocking loss to Uruguay in the 1950 World Cup on trial. But she finds her plans sabotaged -- by someone who seems possibly to be her! She is a bit of a mess herself anyway ... and scary as it is, the eventual notion that there are other worlds to which one might even travel becomes almost alluring.

Edson has a large family, and one of his brothers is a criminal. In trying to get him out of trouble, Edson meets a beautiful quantum computer specialist, Fia Kishida. But quantum computers are proscribed tech, in this future of pervasive surveillance, so Fia is a dangerous person to know -- and after a while Edson is wanted himself, and on the run, with a different version of Fia -- and they too are looking to cross universes.

And finally Luis Quinn, in company with a French scientist, Robert Falcon, travels up the Amazon to deal with Father Goncalves, who has been converting Indians to Christianity and enslaving those who won't convert. Between the slavery, and Goncalves' odd version of Christianity, and his apparent desire for personal power, he is a pretty bad guy. But a powerful guy too, and Quinn is forced to try to find a tribe rumored to have great predictive powers, based on ingesting a frog's secretions. Of course, these powers turn out to arise from perceiving the many possible worlds all at once ... and Quinn gains these powers himself.

So on all three threads, the notion of parallel worlds, and travel between them, becomes central. And there is an action plot deriving from conflict across these worlds. I was reminded of Leiber at times, and of course of a certain Robert Charles Wilson novel too. It's a pretty good novel, very colorful, with imperfect but involving characters. It didn't quite work as well as River of Gods to my taste -- I'm not entirely sure why. Perhaps the overarching theme didn't quite convince me. Perhaps some of the cute touches, like the 18th century characters speculating (with the help of a sort of Babbage machine) in very 21 century terms on things like the universe being a computer simulation, turned me off a bit. But these are minor quibbles -- this is a fine novel, well worth your time.
Posted by Rich Horton at 1:17 PM