Birthday Review: Think Like a Dinosaur and Other Stories, by James Patrick Kelly

Today is Jim Kelly's birthday. Last year on this date I did one of my Locus review collections. This year, instead, I'll republish something from Tangent, where I got my start reviewing short fiction! 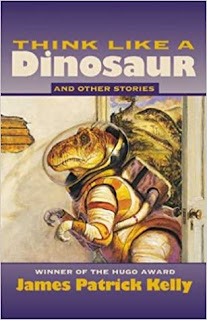 Reading a collection of James Patrick Kelly's stories, I am struck most forcefully by his range. The stories in Think Like a Dinosaur and Other Stories include cynical cyperpunkish adventures, gentle romantic stories, mainstream character explorations, and pure, idea-driven SF, and Kelly can wax passionate, lyrical, comedic or satirical as needed.

Start with the Hugo-winning title story. Michael is a human sapientologist assigned to Tuulen station, a wormhole hub operated by the dinosaur-like Hanen for human use. He guides the human travelers through the process of transmission, which involves a complete scan of their body, and its reconstruction at the receiving hub. Their "original" body is then destroyed, to maintain "balance", to prevent multiple copies of the same person from existing. A transmission problem causes a Kamala Shastri to have to wait to confirm successful recreation of her body at the receiving end: and after it works, Michael must kill her. But now he's gotten to know her, and anyway she's no longer quite the same person he transmitted. Michael's dilemma is agonizing, and, as has been well-documented, is in obvious response to a somewhat similar dilemma at the heart of the famous Tom Godwin story "The Cold Equations". But this story is subtler and better done: especially as it raises questions of identity and the nature of consciousness which echo similar questions in Algis Budrys' great novel Rogue Moon; and also because of the subtle reinforcement of the central questions throughout the story: as Michael and Kamala trade stories of youthful encounters with death, and as the (cold-blooded, of course) Hanen discuss immature Human attitudes towards "balance". A thought-provoking story, which raises intellectual and moral questions, and resolves them ambiguously, and which has said more to me each of the several times I've read it.

Kelly's early reputation was as one of the "humanist" side in the silly and mostly false '80s dichotomy of cyberpunks (Gibson, Sterling) and humanists (K. S. Robinson, Kelly). But several of his most striking stories venture into so-called "cyberpunk" territory. Included here are "Rat", a fast-paced and intriguing tale of a violent, decayed future, where the title character smuggles a large quantity of a fashionable drug into the US, and must try to avoid both federal agents, and the local middlemen who is trying to double cross; and "Mr. Boy", a long novella which is also part of his novel Wildlife. Mr. Boy is 25, but his mother keeps him somatically and emotionally at the age of 12 by repeated "gene twanking". His friends are a 13-year old boy who has been twanked into a dinosaur form, and an artificial intelligence his mother bought him as a companion/bodyguard. Mr. Boy's life begins to come apart when some illegal "corpse porn" is traced to him, and his understanding of his life is shaken when he meets a 17-year old "stiff" (read: untwanked) girl and starts to fall in love. The background details of the story are excellent, very Sterlingesque: Virtual Environment parties, his mother's chosen "twanked" form (Mr. Boy doesn't just live with his mother, he lives "in" her), smash parties, the mall franchise families, and so on. The main story itself is affecting, but a bit obvious: we know from the start just what Mr. Boy needs: to grow up.

Kelly's "sweeter" side shows in "Faith", about a newly-divorced woman who tries the personal ad dating route. Eventually she meets a man who talks to plants (and gets results). She needs to learn trust, or, as it were, faith. It is gently humorous and honestly romantic. An unexpectedly "sweet" story is "Monsters", a seemingly straightforward story about two misfits who work in a dry cleaners. The story takes a successful, almost magical-realist, twist at the end. Throughout the characters are sharply and closely drawn, and very affecting despite very real human weaknesses.

"Breakaway, Backdown" is another outstanding pure SF story. It's a monologue by a young woman who has just returned from a space station, addressing a younger woman who still dreams of space. It very affectingly depicts the real agony of making a choice which quite literally separates one forever from Earth. Kelly suggests, very economically, a convincing separate society of humans adapted for space.

The obligatory "mainstream" story is "Heroics" (which does have a suggestion of clairvoyant dreaming to qualify it as marginal SF). This is a moving look at an ordinary man who thinks of the choices he's made in his life, and can't convince himself that he isn't a coward. A series of dreams about a boat disaster and his failure to help the victims exacerbates his feelings. Finally, as we know will happen, the disaster occurs in real life. The hero's response is honest, and the ending is just ambiguous enough to raise questions in the reader's mind about the real nature of "heroism".

The other stories are similarly good, if sometimes slight. I'll briefly mention the most memorable. "Standing in Line with Mr. Jimmy", which echoes some of "Mr. Boy"'s concerns with independence, as a street-smart hustler, living on state maintenance, faces forced enrollment in a work gang, and considers the way out offered by a mysterious organization. The story's resolution turns on the value of depending on other people instead of free escapes, mechanical aids, or the government. "Pogrom" is a very pointed story about an old person in the next century, held responsible by young people for the decayed state of the world. It's an effective lecture, but unfortunately more lecture or screed than story. "Itsy Bitsy Spider" is a nice, quiet, look at a grown woman's encounter with her long-estranged father, now losing his memory and attended by an unexpected companion, herself.

Short fiction has always been central to genre SF, and story collections are an important way of coherently preserving the best short fiction. But lately economic considerations seem to have made story collections marginal products for big name publishers. I was surprised to see that this is Kelly's first collection (save a brief four story book from Pulphouse): he is one of the best writers in the field, and in my opinion short fiction is his stronger suit. So it's nice to see Jim Turner, who also edited the Ian R. MacLeod Voyages by Starlight collection (which I also reviewed in that issue of Tangent) for Arkham House, providing in Golden Gryphon Press a new outlet for economically marginal but very valuable books like this one.
Posted by Rich Horton at 7:51 AM