Today is Karen Joy Fowler's birthday. Last year I presented a summary of my reviews of her short fiction; so this year I'm resurrecting a review I did back in 1997 (I think one of the very first reviews I did for widish consumption) of her lovely second novel. 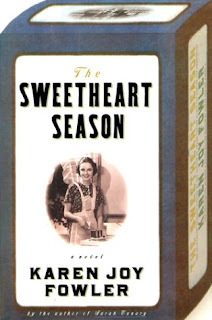 Karen Joy Fowler's first novel, Sarah Canary, is a marvel, an amazing, original novel about aliens, of all sorts, in the 1870's American West. It is extraordinarily assured, the best first novel I've read in a long time - indeed, in my opinion, at least arguably the best SF first novel of the nineties. Obviously, I have eagerly anticipated Fowler's second novel, which has now appeared: The Sweetheart Season.

Categorization of Fowler's work in a generic sense has always been difficult: perhaps a better word would be pointless. That said, most of her stories, for me, read best as SF or fabulations, but she is clearly enough a writer who appeals to non-SF readers as well. Sarah Canary is readable as a "mainstream" novel, though I think it is best read as SF; in John Clute's words, it is a First Contact story. The Sweetheart Season, by contrast, seems clearly a "mainstream" novel to me, though one could define certain of the events of the story as fantastical if one insisted.

The story concerns a small town in northern Minnesota, Magrit, home to a grain mill and an associated cereal business. It is set in 1947. The viewpoint character is Irini Doyle, though the story is told in the "voice" of her daughter, retelling Irini's story from a present day perspective. Irini lives with her alcoholic father (her mother is dead), who is a research chemist at the cereal company. Irini works in the Research Kitchen of the cereal company. The other characters are her co-workers (all women) in the Kitchen, as well as the company founder, his wife, and his grandson, and a few other local women.

The main action of the novel revolves somewhat loosely around a promotional scheme of the founder: the girls at the company form a baseball team, which barnstorms through Minnesota and Wisconsin, purportedly demonstrating the nutritive benefits of the company's cereal by their success. Several other narrative threads are woven into the story: the writing of a continuing promotional kitchen/life advice column by the fictional Maggie Collins, a sort of Betty Crocker-type spokesperson for the cereal company; the antagonism between the former residents of Upper Magrit (submerged to make the mill) and Lower Magrit (where everyone now lives); the involvement of the mill owner's wife with Gandhi and the Indian independence movement; the efforts of the local women to find love and husbands in a town left nearly male-free by the war; and a mysterious (young, male) visitor to Magrit. All of these threads are well-integrated with the novel's theme, as I read it: essentially: the nascent "Women's Liberation" movement, though that over-simplifies: but the focus on the "Kitchen", yet in the context of women who are all working, and playing a nominally male sport, combined with the ironic voice of the present day narrator, and the ironic-in-this-context quotes from Maggie Collins' women's magazine advice column, quite nicely merge to make simple, true, statements about the position of women in 1947, and in our time.

The female characters are very well drawn, and almost invariably engaging. A couple of the male characters come off as ciphers, but the portraits of Irini's father, and of old Henry Collins, the mill owner, are very good. Fowler's prose is clean and elegant. Her narrative voice is a delight: ironic, affectionate, knowing, often very funny. One brief quote, from one of Maggie Collins' advice columns, meant to be read in the context of the decision to form a baseball team: "Polls have recently confirmed what has long been suspected; most men do not want brainy women. Stewardesses have turned out to be that occupation blessed most often with marriage. The key elements appear to be uniforms and travel."

I wouldn't rank The Sweetheart Season quite as highly as Sarah Canary. At times the usually wonderfully controlled ironic voice turns a little shrill. At times she drives home a point unnecessarily: it is sufficient to show us the evidence, or to leave an ironic statement alone for the reader to interpret. Also, I was completely unable to believe the resolution of one of the plot threads. However, the book as a whole is thoroughly enjoyable, and says a lot of worthwhile things about the place of women in our society, especially about how (and, I suppose, why) it changed in the years during and after World War II.
Posted by Rich Horton at 5:22 AM