Today would have been Iain Banks' 66th birthday. Sadly, he died 7 years ago. He was one of the most interesting and enjoyable SF writers, and also a fine writer of contemporary fiction. Here's a review I did of one of his earlier novels, a non-Culture novel, but very much SF. I wrote this way back in 1996.

Iain M. Banks has been publishing SF novels for the past several years, as well as publishing mainstream novels (with horror and/or slipstream SF facets) as by Iain Banks. He has received considerable praise in both genres, but for one reason or another, I have yet to read one of his books until now. 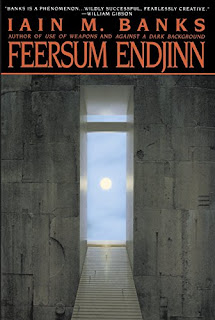 Banks` SF has mostly been set in a far future dominated by the "Culture", a galactic scale group of races, including humans, who apparently inhabit huge starships. Feersum Endjinn, his latest book, isn't part of this future. At the time of the action (which occurs over a couple of days, or several decades, depending on how you measure it), the Earth of the very far future is inhabited by the descendants of those who stayed when most humans traveled to the stars in the "Diaspora". Earth is dominated by an aristocratic class, based in a huge castle, so large that the highest tower extends into space, and the King`s residence, a large "palace", is contained within a chandelier of the greater castle. Ordinary humans are allowed 8 normal lifespans (copies apparently made of their brains` contents at the time of death), after which they are allowed 8 additional "lives" in a sort of virtual reality maintained in the global computer net, after which their personality becomes a component of the AI complex which "is" the net (or "crypt" as Banks cleverly calls it.) At the time of the action, Earth is threatened both by the Encroachment, a dust cloud which will swallow the Sun in a few centuries, and by a virus which is infecting the Crypt. Possible solutions to these problems were left by the humans of the Diaspora, but the means of access to these solutions has been forgotten.

The story is told in four threads, following four main characters: a mysterious, nameless woman, who is soon revealed as a messenger from the Crypt; the King`s Chief Scientist, Hortis Gadfium, who is part of a conspiracy which has been trying to discover the hidden solution to the problem of the Encroachment; an aristocrat and loyal general of the King`s, Alandre Sessine, who is on the point of discovering that the King and his advisors are obstructing progress towards solving the problem of the Encroachment, apparently because such progress is a threat to the status quo, and who is assassinated multiple times, both in real life and post-death virtual reality, for his pains; and finally, Bascule, a young, innocent "teller", that is, one who communicates with the Crypt as part of his job, who is also "recruited" by the Crypt to help find the solution to the encroachment problem.

These four threads are soon seen to be quests which will converge on each other. Much time is spent exploring both the physical and virtual reality of this far future Earth. The resolution is logical and satisfying, and the last line of the book is marvelous.

The strength of this book is the colorful presentation of a truly strange future world. I also found the "Virtual Reality" of the Crypt internally convincing, in a way I often don`t (i.e. I could never really believe in William Gibson`s visions of Cyberspace.) That isn`t to say that Banks has provided rock solid scientific rationales for the elements of this future world: far from it, but he makes us happily suspend disbelief in a lot of unlikely things, partly simply by setting the story so far in the future. In addition, Banks is an excellent and audacious writer. The Bascule sections of the novel are told in a compressed prose, abbreviating words phonetically in Bascule's (I am told) south England accent (like feersum endjinn for fearsome engine), also using numbers and symbols. This is initially difficult to follow, but I picked up on it pretty quickly, and I thought it was vital to providing Bascule an individual voice.

In summary, I loved this book. It is over the top, but in a good way, and Banks makes it all work.
Posted by Rich Horton at 5:05 PM