Here's a return to a subtheme of this series -- popular books for children. As with most children's books it didn't appear on any bestseller lists (and indeed there weren't any such lists when this book was published in 1891). It appears to have been quite popular, however. 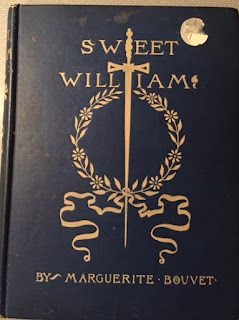 Despite her name, and the fact that Sweet William (as with many of her books) is set in France, Marguerite Bouvet was an American. That said, she was of French ancestry (both her parents came from distinguished French families, but they lost their fortune in the Civil War), and she was born in New Orleans, and she spent about 7 years of her childhood in France, living with her grandparents after her father's death. So she came by her interest in things French honestly enough! She was born in 1865 and died in 1915.

She spent some time as a French teacher, but turned to writing. Most or all of her books were for children. Sweet William was one of her earliest books, published in 1891, by the Chicago firm A. C. McClurg. It was illustrated by Helen and Margaret Armstrong, a pair of sisters who were significant women illustrators of the time. (I like the illustrations quite a bit.) My copy has pasted-in labels on the inside front cover, reading: "To Stephney Roller on her 7th Birthday, From Pearl Sling[?]". 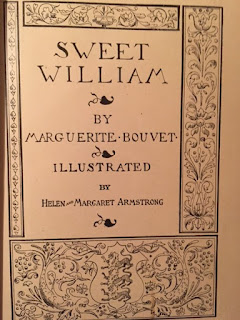 Sweet William is the story of a little boy who grows up isolated in a tower of the castle at Mont Saint Michel (called Mount Saint Michael in the book). William is put there by the evil Duke William. It seems Duke William of Normandy (not THE William of Normandy), a cruel man, went off to war alongside his much more popular brother. Both left pregnant young wives at home. William killed his brother on the field (even though both were fighting for France). On coming home, he found that both women had had their children, but William's wife died in childbirth. Furious, he orders the little son of his brother locked up in the tower. His own daughter is raised in the castle, but fortunately the cruel Duke is away most of the time, and in addition his sister-in-law is exiled back to her family. 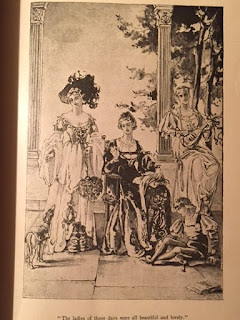 Despite his isolation, young William, soon called Sweet William, grows up a virtuous and happy child. His only companions are his nurse and an elderly manservant. Aged 6 or 7 or so, he spies his cousin Constance going off to hunt on her beloved horse -- and she sees him in the tower. Soon she has inveigled her servants to allow her to visit the tower, and she and William become close.

Things continue in that vein for a while, with the cruel Duke away most of the time. The only person he is nice to is his daughter. But eventually something must give. The Duke takes Constance to a joust in a far away town, and in the process she attracts the attention of a handsome young man. (The attention is made to seem almost sexual -- although Constance at this time is perhaps 9 or so, making this all a bit creepy.) The young man, a Count, manages to talk to Constance, and learn something of her family, and of the mysterious cousin hidden away in a tower. But the Count has a secret of his own -- a lost sister who married a nobleman from Normandy. And the Count recognizes something of his sister in little Constance ... 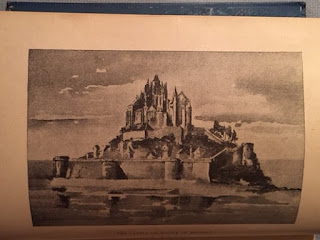 You can probably guess the secret revelation. Which to be honest I found a bit anti-climactic, a bit disappointing. Of course the Duke is brought to a shocking revelation of his own injustice ... though his villainy has always been apparent, and (as the book makes clear) his eventual sort of repentance does him little credit. It is clear the William and Constance (though only 9 or so! and first cousins!) will marry (when they get older) and that Sweet William will become rightful Duke of Normandy in good time.

The book is unrealistic, the plot a bit silly, and there is plenty of sanctimoniousness throughout. And the characters, especially the children, especially Sweet William, don't really make sense. Despite all that, it held my attention through its relatively short length (perhaps 36,000 words), and I can imagine it had some popularity at some time. I don't think it particularly worthy of revival, but I don't regret the time spent reading it.