Stewart Edward White (1873-1946) was a very popular American writer in the early decades of the 20th Century. Only one of his books made the Publishers' Weekly list of ten bestselling novels of its year: The Silent Places was 10th in 1904; but he was generally successful. He was a friend of Theodore Roosevelt's, who admired both his literary prowess and his shooting. White was an avid outdoorsman, a hunter, camper, and canoer. Most of his books (fiction as well as travel) were set in the American West, in the wilderness, and were packed with detail based on his own experience or his interviews with fur traders and the like. Then, around 1920, his wife Betty began to (she said) receive messages from spirits; and the two published a number of books about those messages until Betty died in 1939. White then claimed to have received further messages from Betty in the afterlife, and wrote at least one more book based on them.

In the context of most of his oeuvre, then, The Leopard Woman is an outlier. It is set in Central Africa, in the early days of World War I. It does still reflect his interest in hunting and his knowledged of the subject. It is also, not surprisingly, quite racist in its depiction of the natives of Central Africa. The view expressed in this book is not vicious, nor hostile, but rather extremely condescending. There's really no getting around that -- and there's little doubt the view of African tribesman as portrayed here is quite consistent with that of the general American (and European) public at that time -- but it remains distasteful to contemporary sensibilities. 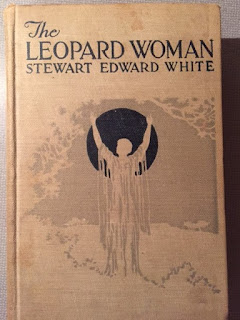 The Leopard Woman was published by Doubleday, Page & Company in 1916. It is illustrated, rather nicely, by W. H. D. Koerner. My copy appears to be a First Edition, in good condition, no dust jacket. It was made into a silent film in 1920, starring Louise Glaum and House Peters. There are apparently letters between Gary Cooper and Ernest Hemingway discussing a possible talking version that would have been scripted by Hemingway and starred Cooper, but obviously that came to naught. 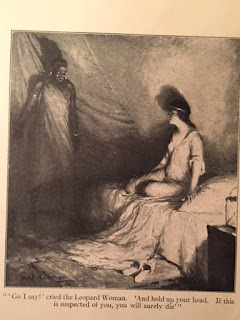 The novel opens with a safari on the march. The leader is an Englishman named Culbertson, but called Kingozi. We learn of the structure and discipline of the safari team: his trusted delegates, Cazi Moto and Simba, Culbertson's reputation as a very knowledgeable man and a great shot. Soon they unexpectedly encounter another safari, and Kingozi forms a low opinion of this group -- it seems less disciplined, and it's hard to understand what they are doing. To his surpise, he learns that it is led, if somewhat incompetently, by a European woman, who is called "the Leopard Woman".

Out of a sense of both obligation and curiousity, Kingozi ends up joining the other safari -- it's clear they don't know where to find water properly, etc. And he is soon somewhat bewitched by the very beautiful Leopard Woman. But he has a responsibility -- not quite clear to us -- and he remains tied to that, even as he is tempted to make love to the Leopard Woman (especially when she arranges a scene where she displays herself in a light shift with the moon behind her -- apparently Kingozi can barely resist such a sight).

There follow some adventures -- a charging rhinoceros, for instance -- and some intrigue, as Kingozi and the Leopard Woman, who are clearly at some sort of cross purposes, jockey for control of the travel sequence. When it becomes clear that Kingozi will prevail, and continue his journey to meet a great and influential chief, the Leopard Woman has one of her lackeys attempt to murder him. He escapes, but one of his men is killed, and continues -- when he is suddenly struck blind. To make things worse, when he asks the Leopard Woman to identify the medicine he happens to carry that will cure him, she refuses -- and indeed breaks the vial. But Kingozi perseveres, well aware that his rival, the German Winkleman, is also making his way to meet this chief -- and alliance may be important to the progress of the War. Fortunately, Kingozi has assigned a couple of his most trusted men to use a magic bone (a fossil) to distract Winkleman (who is a scientist).

There are a couple of tiny twists to come, but the conclusion is mostly straightforward, culminating, of course, in a resolution of the relationship between Kingozi and the Leopard Woman -- or, that is, Culbertson and the Countess Miklos. It's not a great book, but it is pretty entertaining on balance. And White's descriptions of the safari, and the techniques behind the march and the camp and the hunt, and of the Central African landscape, really ring true. White tells all this in a very knowing tone -- and as I know nothing of the subject I trust that he got it right. (He did write at least one straightforward travel book about Africa.) I don't know that  this book will ever really be revived, but, except for its casual (though not hostile) racism (which may indeed, and understandably, be sufficient bar to enjoyment for many readers), it's not a bad adventure novel.
Posted by Rich Horton at 7:45 PM