Castle Garac actually was not a bestseller, but the author, Nicholas Monsarrat, was known for one major bestseller, The Cruel Sea (1951), which was the 6th bestselling novel in the US in 1951 according to Publishers' Weekly. (That was a time for naval novels of the Second World War: the second bestselling novel that year was The Caine Mutiny. And for that matter the bestselling novel of 1951 was From Here to Eternity, which is about the Army, not the Navy, but which is set at Pearl Harbor, so surely involves some naval matters.) The Cruel Sea was perhaps my father's favorite novel (though he also used to mention Run Silent, Run Deep, another WWII Naval novel.) (My father was in the Army in Korea, for what that's worth.)

Nicholas Monsarrat (1910-1979) was an English writer and also a Lieutenant Commander in the Royal Navy, who served with distinction in the Second World War, and was later a diplomat. He wrote his first novels in the '30s, but become much better known for his sea stories, beginning during the War. He became a full time writer in 1959. Several of his novels were well-regarded at the time, but only The Cruel Sea seems much remembered any more. 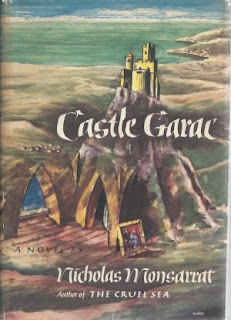 Castle Garac dates to 1955. My copy is an American first, from Knopf. Though the book didn't seem to be reviewed well, it had a Book of the Month Club edition and numerous later paperbacks, so it probably sold OK. It looked interesting to me as potentially in Alastair MacLean territory -- and it brushes against that -- but from another angle it has Gothic aspects, though it's told from the POV of the male lead. Comparing the original hardcover dust jacket with a later paperback shows the paperback marketers chose to emphasize -- indeed, greatly exaggerate -- the gothic aspects. 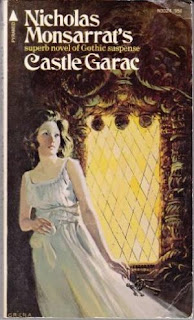 The novel opens with said male lead, Tom Welles, in Nice, France. He's a youngish ex-journalist, who moved to France to write his first novel. The novel is finished, and he's sent it to his agent, and he waits every day for a response. Meanwhile he's almost out of money. One breakfast he decides to steal a roll of bread from another diner, who seems ready to leave the bread. Suddenly the man (who is named Ehrenhardt) returns, and engages Tom in conversation -- but not because he noticed the theft. He wants to offer him a job.

The job involves looking for a castle in the area, potentially, it seems, to shoot a film of some sort. The castle found, the next task will be to find an appropriate young woman, Tom supposes perhaps to star in the picture. If that's what it is. The job also involves interacting with Mr. Ehrenhardt's beautiful wife, who makes a point of repeatedly attempting to seduce Tom. All this goes along well enough -- Tom has enough money to survive, and rather more, after Mrs. Ehrenhardt stakes him some money at a casino, and insists Tom keep half the rather unexpected winning he realizes. But Tom feels a bit uneasy -- there is something funny about the Ehrenhardts.

Finding an appropriate castle turns out not to be too difficult, but finding just the right woman is much harder. Tom is all but ready to give up, and gets drunk in despair, when he chance meets a girl in a park, tending a child. He gathers she is a nanny for an American couple, and that also she is an orphan -- an important detail to the Ehrenhardts. He decides he must offer her the job -- it could mean some money for her. But then he decides (surprise! surprise!) that he is falling in love with her (her name is Angele), and he regrets introducing her to the now very sinister seeming Ehrenhardts. But Angèle disappears, as do the Ehrenhardts, leaving Tom a note informing him that his services are no longer required. Oh, and Tom gets a letter from his agent -- it seems that not only has his novel sold, a movie producer is interested. Tom will be well off -- able to support a wife. But the girl he loves is gone!

Naturally Tom figures she might be at the castle (though the Ehrenhardts claim to have abandoned their plans for it). And what follows is the gothic part -- mysterious castle, girl in distress (though not really that much, it turns out!), gypsies, a mysterious stranger, and a tangle story of a rich French noble family who were all killed by Nazis ... or were they?

I thought there was some promise to all this, but the book ends up, in my view, a couple of twists, and a couple action scenes, short of the proper thriller/gothic requirements. And the Ehrenhardts, though a bit shady, are not really dangerous or violent -- and the whole scheme is not really all that sinister or dangerous. And it ends up failing for a reason out of left field. I was all unconvinced by Tom's good fortune as a first novelist -- the view of the writing life was almost as unrealistic as that on the newspaper comic Funky Winkerbean (Les Moore is one of the stupidest portrayals of a so-called writer I have ever seen). I did like the romance between Tom and Angele, though more or less by default. All in all, this is a very slight novel, and frankly well worth being forgotten. It seems perhaps Monsarrat was trying something different from his sea story niche (and from his earlier novels, which were realistic social novels, apparently) -- and good for him for trying, but it doesn't really work.
Posted by Rich Horton at 5:27 PM