Old Bestseller: Within the Law, play by Bayard Veillier (novelized by Marvin Dana)

Old Bestseller: Within the Law, play by Bayard Veillier (novelized by Marvin Dana)

I wanted to get back to the original focus of this blog -- popular fiction of the early part of the last century. This is an example of a once common sort of book, directly analagous to the movie "novelizations" of today: a novel written from a successful play. (I have covered one of these before in this series, A Fool There Was, by Porter Emerson Browne.) The play Within the Law was a major Broadway hit in 1912/1913. The novel version, by Howard Dana, came out in 1913 from Grosset & Dunlap. (The play was published by H. K. Fly, apparently a leading publisher of plays in that time, perhaps a competitor with the better known (and still extant) Samuel French.) The book version is illustrated, not to my taste very well (for example, Mary is not terribly beautiful as drawn), by William Charles Cooke. 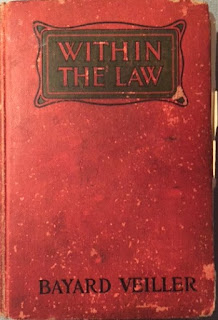 Bayard Veiller (1869-1943) was a Brooklyn native, who turned to writing plays in 1907 with The Primrose Path, a failure. Within the Law was his second play, and it was a big success. (Two other productions followed immediately, including a "burlesque" version of Within the Law called Without the Law.) He soon turned to screenwriting as well, with, it seems, considerable success. (Within the Law itself was made into a movie five times.)

Marvin Dana (b. 1867) is a more obscure figure. He seems to have adapted a number of plays (and perhaps movies as well) to novel form, including a version of The Shooting of Dan McGrew, based on the Robert Service poem but probably timed to coincide with the 1915 movie. He may have written his own novels as well.

Within the Law is a highly melodramatic piece. It opens with Mary Turner, a poor girl (but, naturally, the daughter of a gentleman) who had been reduced to making a living in a department store (The Emporium) being falsely accused of theft. She is sent to prison for three years: despite a recommendation for clemency, the Emporium's owner, Mr. Gilder, insists she be made an example of. She insists on speaking to him, and suggest a better way to stop the thefts -- pay the girls a living wage. And then she vows revenge.

She serves her term (apparently she could have had her sentence reduced at the cost of her virtue, but refused), and upon release, finds a couple of jobs, only to be (implausibly, I thought) hounded out of them by the NYC police department, which pressured her new bosses to fire her. In despair, she throws herself into the river, only to be rescued by a passing criminal, Jim Garson. When she recovers, she decides to devote herself to crime -- but not to violate the law. She has noticed the cynical way people like Gilder manipulate the law, and so she hires a lawyer, and along with Garson and a woman she met in jail, she starts making money by such schemes as inveigling older men into breach of promise suits, etc. -- always staying technically on the side of the law, that is "within the law".

The time comes for her plan to revenge herself on Gilder. She does this by attracting the attention of his son, Dick, and bringing him to the point of marriage. Then she will reveal herself to her new father-in-law, as the felon he had sent to jail. This will ruin the Gilders socially, etc. etc.

Of course you see the coming complication -- she falls in love with Dick. But she still goes through with her plan, and all might go well except that Garson is drawn back into actual crime -- a scheme to steal some valuable tapestries from the Gilder house! Of course this is a scheme by a vengeful policeman to capture Garson, and hopefully Mary as well. Things get worse when Dick Gilder intervenes, and Garson shoots the stool pigeon who set up the thing. Dick and Mary are discovered with the dead body and the gun, and the policeman is ready to use this leverage to send Mary to prison and thus free Dick from his unfortunate entanglement.

Will true love prevail? Yes, of course, in a couple of ways -- Dick and Mary remain loyal, and so does Jim Garson, who (at the cost of his life) confesses his crime in order to save Mary (with whom he too is in love). Mary goes straight, of course, and the policeman (a nasty character) is only slightly embarrassed, and the elder Gilder is also only slightly abashed by his previous bad behavior.

It's all a lot of guff, of course. And the novel version, as far as I can tell by a quick comparison with a copy of the play I found online, is much worse. Dana adds a ton of prosy moralizing, with constant encomiums to Mary's innate virtue, etc. He also adds a boring and unnecessary section set in prison. The play seems to move more quickly, and also to give a bit more background and believability to the love story between Mary and Dick. Notable (and I don't know if this was in the play as well) is some quite remarkably cynical treatment of the police, and of their blatant disregard of Constitutional niceties. That has a chance to be interesting, but it's not handled subtly enough. And I was quite disappointed that, in particular, the elder Gilder is never really properly punished for his bad actions. I do suspect that all this played rather better on the stage that it does on the page, and not just because of Dana's unfortunate additions and structural changes -- it's simply a story better designed for that presentation.